A straight woman has a thing for guy-on-guy action and wants to know: \"What\'s up with that?\" 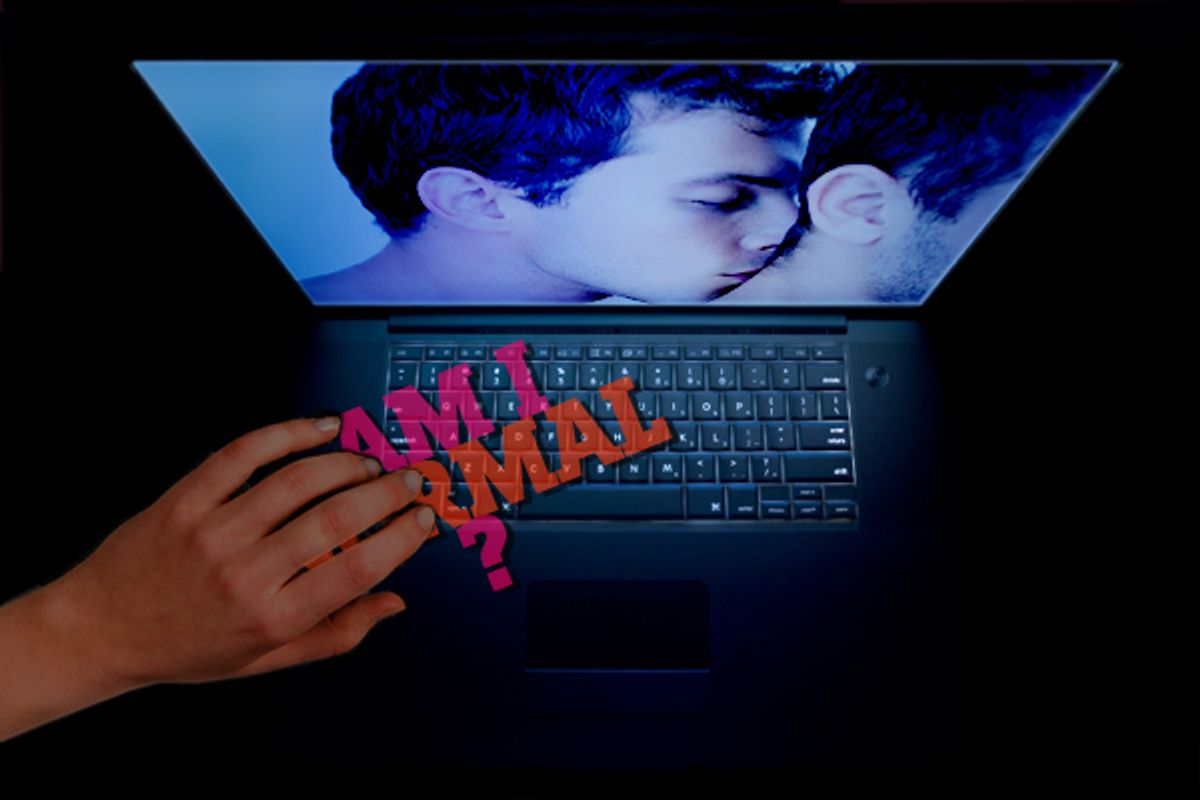 (AISPIX and Sergey Peterman via Shutterstock)
--

Email your questions to tracy@salon.com.

Just the other night, I had the bizarre experience of co-judging a classy, high-brow event called the Air Sex Championships. At one point during the show, a man going by the pseudonym "Sir Fucks A Lot" climbed onstage wearing a baseball cap, a muscle-hugging V-neck, cargo shorts and a cocky Casanova smile. He looked like a straight frat boy stereotype, but to everyone's great surprise he began enthusiastically enacting a gay sex scene -- and, reader, it was hot. For the only time that evening, the all-female judging panel leaned forward -- instead of recoiling in disgust -- to get a better look.

This was just my most recent brush with straight-female sexual appreciation of gay men. I've come across variations on your question -- both in talking to female friends and in the short time that I've been fielding reader questions -- countless times before. (It isn't just heterosexual women -- remember the scene in "The Kids Are All Right" where the lesbian couple puts on some retro gay smut to get in the mood?) There isn't any reliable data on just how common your interest is, but Ogi Ogas and Sai Gaddam, who analyzed Web searches in "A Billion Wicked Thoughts," report that "over the past four years, gay porn has surged in popularity among heterosexual women and doesn't show any sign of having peaked." It doesn't stop at hardcore videos, either: Consider the thriving online world of explicit slash fiction, in which fans of various items of pop culture ephemera write scenes where straight-male leads -- from "Star Trek's" Kirk and Spock to "Twilight's" Edward and Jacob -- get it on. In Japan, there is a comic book equivalent called yaoi (or "boy love") with a similarly female-d...

So, no, you are hardly "a freak" -- at least not in any negative sense. Now as for the tougher issue of "What's up with that?" I took your question to award-winning gay-erotica author James Buchanan, whose audience is largely female. "The men are free to explore their roles and enjoy each other without this omnipresent sound track of what society 'expects,'" Buchanan said. "And female readers can choose to identify with either, or both, protagonists in the story." Fantasies are supposed to allow us to escape our usual roles, after all. Speaking of roles, a study published in 2004 by a psychologist-anthropologist duo theorized that part of the female attraction to slash is that it's "based on shared adventure, and its protagonists slay each other's dragons." The authors write, "Although the heroes of mainstream romance novels are 'warriors,' the heroines are not warriors, no matter how intelligent, well-educated, fiercely independent, professionally successful, and spunky they may be." They surmise, "The typical slash fan may be a woman who is psychosexually unexceptional but who, for whatever reason, prefers the fantasy of being a cowarrior to the fantasy of being Mrs. Warrior." Maybe you want to be the pornographic equivalent of a co-warrior -- a co-screwer instead of a screwee?