Iraq pullout: The quicker the better

Critics of U.S. withdrawal plans are on the wrong side of history 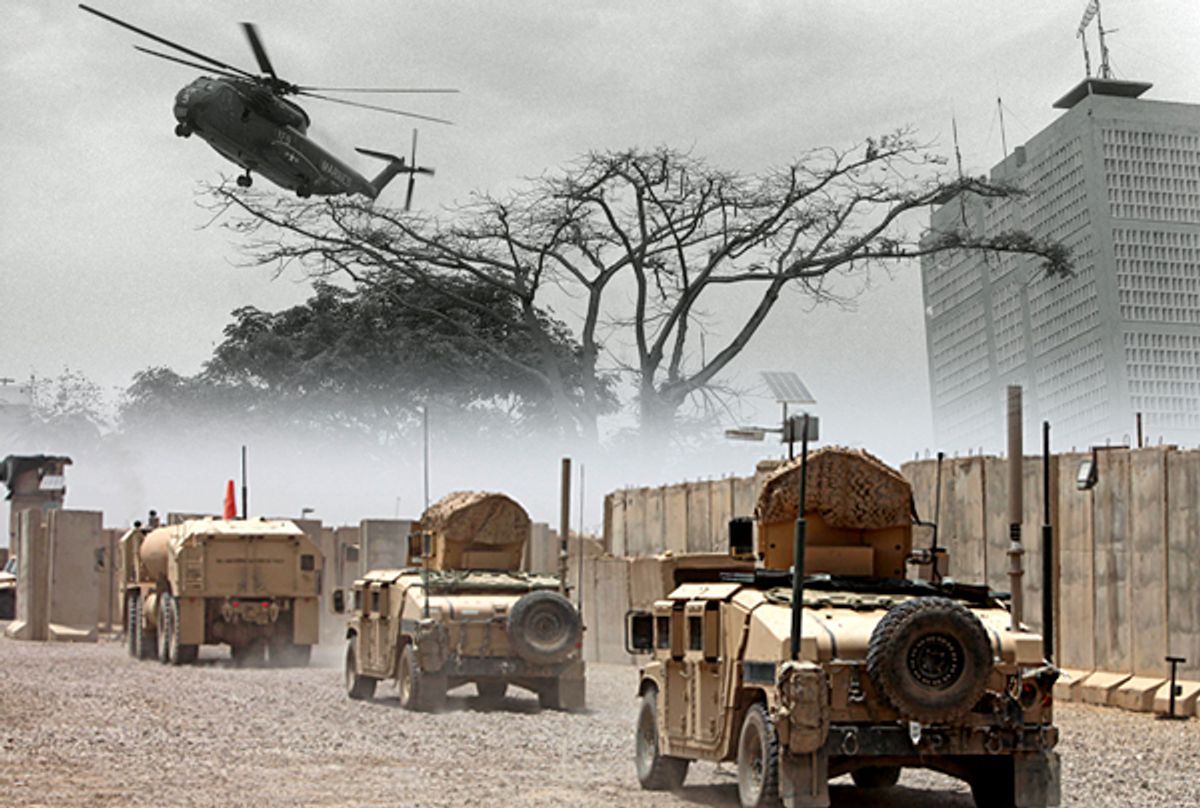 A U.S. Marine helicopter lifts off from the rooftop of the U.S. Embassy during the evacuation of Saigon on April 30, 1975. Bottom: US Army vehicles leave their base after a handover ceremony in May 2010. (AP)
--

Illinois Rep. Tim Johnson has been a weathervane on the Iraq War. He voted in 2002 to authorize the war. In 2006 he declared the Iraq War essential to the war on terror. In 2007 he voted against withdrawal -- and then in 2008 he voted to investigate President Bush for lying about the war Johnson had passionately supported all along.

So when Johnson recently told an audience in Decatur that the U.S. needed to withdraw immediately from the Middle East, Johnson knew what he was doing. The war is no longer popular. The Republican congressman was speaking to a mostly white conservative crowd -- and he received huge applause for his words.

Washington is slower to respond. Most policymakers are not yet heeding the two-thirds of Americans who want to withdraw completely from Iraq. Dianne Feinstein, chair of the Senate Intelligence Committee, said in September she would oppose any move by the Obama administration to whittle down the U.S. presence to 3,000 by the end of 2011. Sens. John McCain, Joseph Lieberman and Lindsey Graham all agreed, saying “a follow-on force might lack the capabilities and authorities necessary to help Iraqis ensure stability across the disputed territories in northern Iraq, which we consider an essential mission.”

The neoconservative Foreign Policy Initiative is even blunter, hosting an open letter by 43 of the usual hawkish suspects that declares: “[A] failing state in the heart of the Middle East would destabilize the region, empower Iran, and make vain more than eight years of efforts by the United States in Iraq,” they wrote.

Behind these debates are the changing facts on the ground in Iraq. This week, U.S. officials denied that the United States had agreed to leave 5,000 troops there beyond 2011, but talks appear headed that way. Under a 2008 agreement, all American troops are supposed to be out of the country by the close of this year. Over the next few months, all 41,000 of the current troops are scheduled to leave in small units. U.S. military bases have already dwindled from 505 to 23. Remaining troops will be stationed mostly in consulates in Basra, a southern city, and Erbil, in the north.

The American diplomatic presence will drastically increase in the coming months, totaling 16,000 civilian employees working in Iraq under the American ambassador. Even if the U.S. military does leave Iraq, the American footprint will be far from invisible in the country for years to come. But that isn’t enough for hawks like McCain, who says that more than 10,000 troops need to stay lest anarchy reign.

As it happens, the United States has experience withdrawing from an ill-conceived, poorly executed, prolonged war in a distant land. Vietnam has faded as an analogy in American life, but it offers important lessons for the design of foreign policy strategy. How the U.S. recovered from its first defeat -- and why it was able to do so with astonishing swiftness -- suggests that swift withdrawal from Iraq may not be catastrophic for America. On the contrary, our experience in Vietnam suggests leaving Iraq immediately is the best thing we can do for ourselves.

Of course, the popular image of America’s departure from South Vietnam is hardly one that seems worth emulating. Iconic videos and photographs of U.S. helicopters leaving from the embassy in Saigon -- the largest helicopter evacuation in history, in fact -- seemed to encapsulate a weakness that Americans were unfamiliar and uncomfortable with. They provided a disturbing counterpoint to the uplifting iconic snapshot of GIs hoisting Betsy Ross’ flag on Iwo Jima in 1945.

Vietnam hawks maintain that withdrawal encouraged Soviet adventurism around the globe. “The collapse in 1975 not only led to genocidal horrors in Indochina; from Angola to Ethiopia to Iran to Afghanistan, it ushered in a period of American humiliation, an unprecedented Soviet geopolitical offensive all over the globe, and pervasive insecurity, instability and crisis,” wrote Secretary of State Henry Kissinger in his memoirs.

U.S. withdrawal also proved disastrous for the South Vietnamese who had fought against the North. An estimated 1 million people were imprisoned without trial or formal charges by the North Vietnamese and 165,000 died in "reeducation camps." Thousands more were tortured. The so-called boat people, refugees fleeing Laos, Cambodia and especially South Vietnam, became an international humanitarian crisis on the Asian seas, where they were often at the mercy of pirates and placed in refugee camps with poor conditions.

And yet, for all this horror, it is unclear how things could have been any different. Depending on when one considers the official beginning of an undeclared war, the United States fought for as long as 25 years to defeat North Vietnam. Somewhere between 1 million and 3 million Vietnamese soldiers and citizens were killed, depending again on the source consulted. Some 200,000 to 300,000 Cambodians, 20,000 Laotians and more than 58,000 Americans were also killed during the conflict. Prolonging the war, in other words, was itself a humanitarian disaster.

From an American standpoint, there is less ambiguity. The dominant rationale for U.S. participation in Vietnam was one of credibility. “For the United States, this first defeat in our Nation's history would result in a collapse of confidence in American leadership, not only in Asia but throughout the world,” Richard Nixon declared in his famous “silent majority” speech. “Our defeat and humiliation in South Vietnam without question would promote recklessness in the councils of those great powers who have not yet abandoned their goals of world conquest," a reference to the Soviet Union. To win the Cold War, the U.S. needed to win in Vietnam, it was argued. As Lyndon Johnson put it, “if you start running from the Communists, they may just chase you right into your own kitchen.”

We now know that this reasoning was completely false. Every president who waged war in Vietnam -- Truman, Eisenhower, Kennedy, Johnson, Nixon and Ford -- feared to one extent or another that the loss of South Vietnam would mean the loss of all of Asia, and perhaps much more, to Soviet-led communism. All were wrong. The United States ran from the communists, but the communists didn’t follow. Instead, they turned on each other. Vietnam and Cambodia went to war, as did Vietnam and China. The victors in Indochina sat on their hands while a communist revolution in Thailand was defeated, and the Chinese and Soviet Union permanently split.

Even more amazingly, just 14 years after American helicopters left South Vietnam in shame, the United States won the Cold War. The Soviet Union unilaterally collapsed, ushering in an era of uncontested American supremacy that has yet to be eclipsed. In precise contradiction to the domino theorists, who swore America’s national security and honor rested on the security of a small, poor dictatorship in Southeast Asia, the United States lost the battle and won the war. It is also far from clear that the Soviet Union’s adventurism from 1975 to 1980 resulted from its perception of American weakness. Whatever gains the evil empire did make were ephemeral, as its collapse less than a decade later proved.

From Saigon to Baghdad

The parallels to Iraq are numerous. Just as in Vietnam, Iraq hawks swear that international catastrophe will result from a U.S. withdrawal. In August 2010, two Heritage Foundation staffers advised Obama that “he should reassure anxious Iraqis and U.S. allies in the region that he will not complacently declare victory and abandon the struggling Iraqi government, leaving a vacuum that would inevitably be exploited by Iran, Syria, al-Qaeda in Iraq (AQI), and other Islamist extremist groups.” Again, American credibility everywhere is on the line. According to Tom Ridge and Michael Mukasey, Obama’s plan “undermines the credibility of our promises around the world and is an affront to the sacrifices of countless U.S. service men and women who died for a free Iraq.”

In fact, any countries that depend on American security will likely be pleased with American withdrawal from Iraq. “The credibility of the United States now relies on the fact that it has signed an agreement with the government of Iraq to remove all its troops by the end of 2011,” says Matthew Duss, a Middle East expert at the Center for American Progress. Reneging on that promise is something all countries, especially those in the region wary of American power, will take note of. The debt America still owes Iraq will best be paid down “through diplomacy and development,” Duss says.

Just as withdrawing from Vietnam enabled the United States to concentrate on its only true foe in the Cold War, so leaving Iraq will permit us to focus on the anti-American terrorists that should always have been our only targets after the 9/11 attacks. Middle East expert Fawaz Gerges argues in his new book, "The Rise and Fall of Al Qaeda," that the terrorist organization is effectively decimated, its leadership destroyed and operational abilities devastated. Defense Secretary Leon Panetta and senior military officials have made similar claims.

Even if they are too sanguine, withdrawal from Iraq will aid efforts against al-Qaida. Iraq has always been at best a distraction from campaigns to defeat those who attacked America on 9/11, and the war there continues to consume precious American resources, attention and, of course, human lives. Redirecting these against bin Laden’s few remaining followers is the wisest course of action.

None of this is to say that leaving Iraq will be completely painless. Leaving Vietnam was not, either. Ultimately, however, keeping tens of thousands of U.S. troops only delays the inevitable. Americans and Iraqis will be better off if the United States learns the most important lesson the Vietnam War teaches: Once you get into a losing venture, getting out as soon as possible is the only way to win.