Peter Gabriel: The past is the future 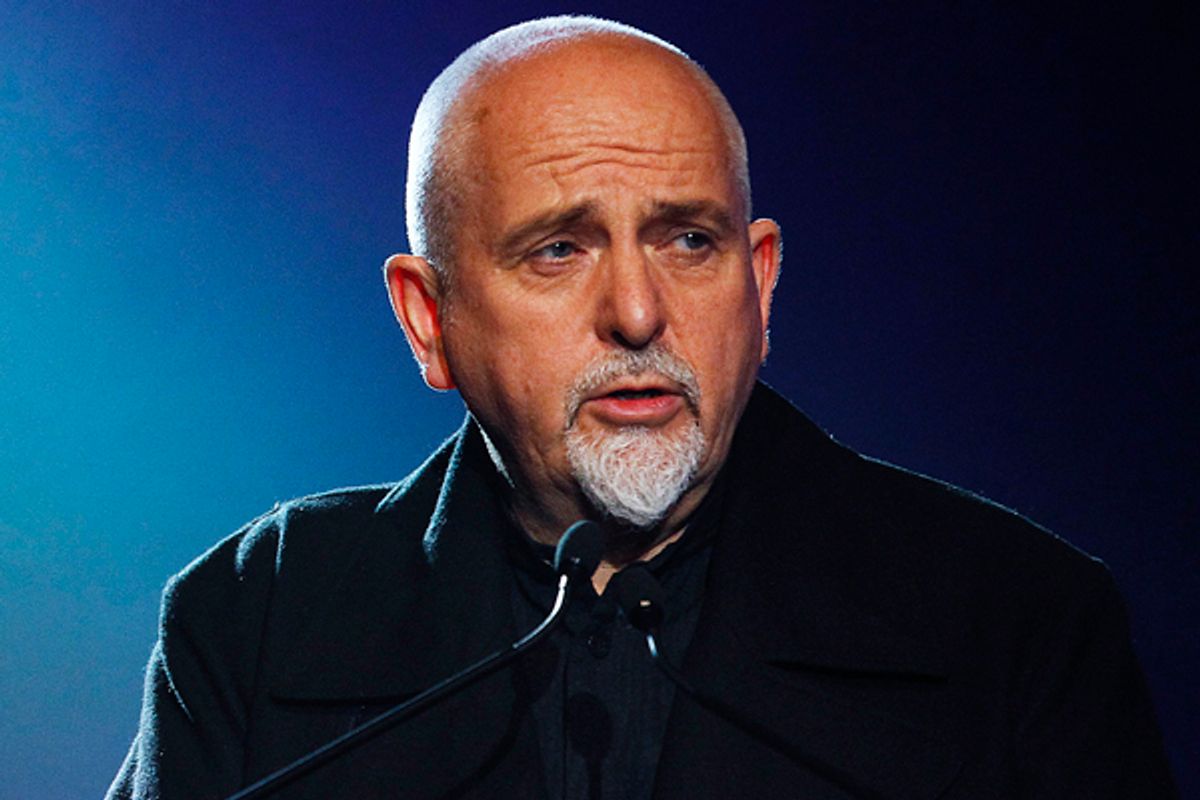 There are no electric instruments, African drumbeats, props, or costumes on "New Blood," the new album and concert film by Peter Gabriel. For an artist who helped pioneer sampling in pop music, famously crossed Eastern and Western rhythms, and has been seen on stages dressed up as a flower and a fox and rolling in a Zorb ball, this is somewhat startling. In the film, Gabriel, for the most part, stands in front of an orchestra, clad in sober gray and black, straightforwardly singing his back catalog and a few covers.

At 61, has the great musical adventurer grown conservative? In an interview with Salon, Gabriel reveals a complex motive for might seem a backward turn. “I think [Stanley] Kubrick said, ‘If you want to make the future credible, include the past.’ A world that is both familiar and strange is the most interesting to me.”

In the Western canonical tradition of music, little is more familiar than the orchestra. Gabriel deployed an orchestra on last year’s "Scratch My Back," to reinvent a selection of cover songs by artists from Neil Young to Radiohead. Most radically, he took “The Boy in the Bubble” from Paul Simon’s "Graceland," and as he says, drained “all the African blood out of it and just [left] this sad Western song. But at the same time, for me, it was quite a fresh world.”

Together with arranger John Metcalfe (Blur, George Michael), he then developed acoustic versions of his own songs with strings and horns, and decided to tour the project with a 46-piece orchestra -- a rather prog-rock move from the man who used to front Genesis. But Gabriel stripped out the electric guitars, the synths and the drums, as well as most of the theatrical elements in his music’s presentation. “I wanted to keep it much more simple, where I was just a singer rather than a performer,” he says.

Gabriel’s voice, distinctive though it is, with a husky lower register, a yearning falsetto, and the ability to switch between the two with quicksilver speed, has perhaps been his music’s least celebrated attribute. "Scratch My Back" brought it to the forefront. After hearing Gabriel’s cover of his Noel Coward-esque song “The Book of Love,” Stephin Merritt, of the band the Magnetic Fields, told the New York Times, “If I could sing like him I wouldn’t have to be a humorist.”

Gabriel seems genuinely touched when he’s told this. “That’s a lovely thing to say ... Somebody said to me on this tour, ‘I think your art is vulnerability.’ And I guess in my voice, there is a sort of a vulnerability; I do try and open myself up to the worlds which are created in the song.”

In conversation, Gabriel comes across as both open and contemplative, even though he’s a somewhat reluctant interviewee who expresses discomfort at having to “sell” something. He explains that he also tries to keep his music separate from his activist work: “People get really fed up with musicians preaching at them all the time.” Nonetheless, he admits, “You have opportunities that I think would be wrong to ignore.”

Gabriel is a co-founder, with Richard Branson, of The Elders, a human rights organization designed to “link young people through technology” to statesmen such as Kofi Annan and Jimmy Carter and create what Gabriel calls “a pincer movement on those in power.” In March, The Elders’ chair, Archbishop Desmond Tutu, was given an award by the Skoll Foundation in Oxford and asked Gabriel if he would sing his 1980 song “Biko” for the ceremony. “We thought we’d try for a small string group and [Senegalese singer] Baaba Maal joining in.” The stripped-down arrangement (sans Maal) made its way onto "New Blood."

Gabriel relates this story without a hint of name-dropping self-importance, and thankfully, "New Blood" reflects his lack of pretense. It turns away from the earnest dreariness of most “unplugged” albums, which strip out much of what makes the originals exciting; he and Metcalfe instead add new motifs, as played with rhythmic verve by bassoons and flutes instead of electric guitars.

And though there may be no synthesizers onstage, the concert film isn’t technology-averse: Screens behind and above the performers illustrate the songs, and the film was shot in 3D. The latter, Gabriel insists, won’t be just a passing fad: “When they’ve got the technology correct on 3D without glasses, people won’t think twice about it; it’ll just be how everything is done. We have two ears and two eyes, so visuals should be 3D in the same way that audio should be at least stereo.”

By the time we reach that stage, Gabriel may even have recorded a new album of original material. When his last, "Up," was released in 2002, he claimed he’d have a follow-up, called "I/O," ready within a year and a half.

“Did I?” he laughs when reminded of this. “Well, that was probably bullshit.” He’s noncommittal as to whether he’ll finish the songs he recorded for this project or work on new ideas. Either way, he promises, “I’ll still do things that are fun and theatrical in the future.” Whatever music he releases will take into account the way his voice has lowered over time -- not a bad thing, necessarily: “I think Leonard Cohen, for example, is more interesting and effective delivering songs for the last 10 years than he was as a young man.”

So there’s an advantage, then, as a musician, in growing older?

“Not always an advantage -- it’s just different ... You are aging, so you get on with it. And try and make it work.”