Demonstrations against Assad regime rage on as threat of violence persists 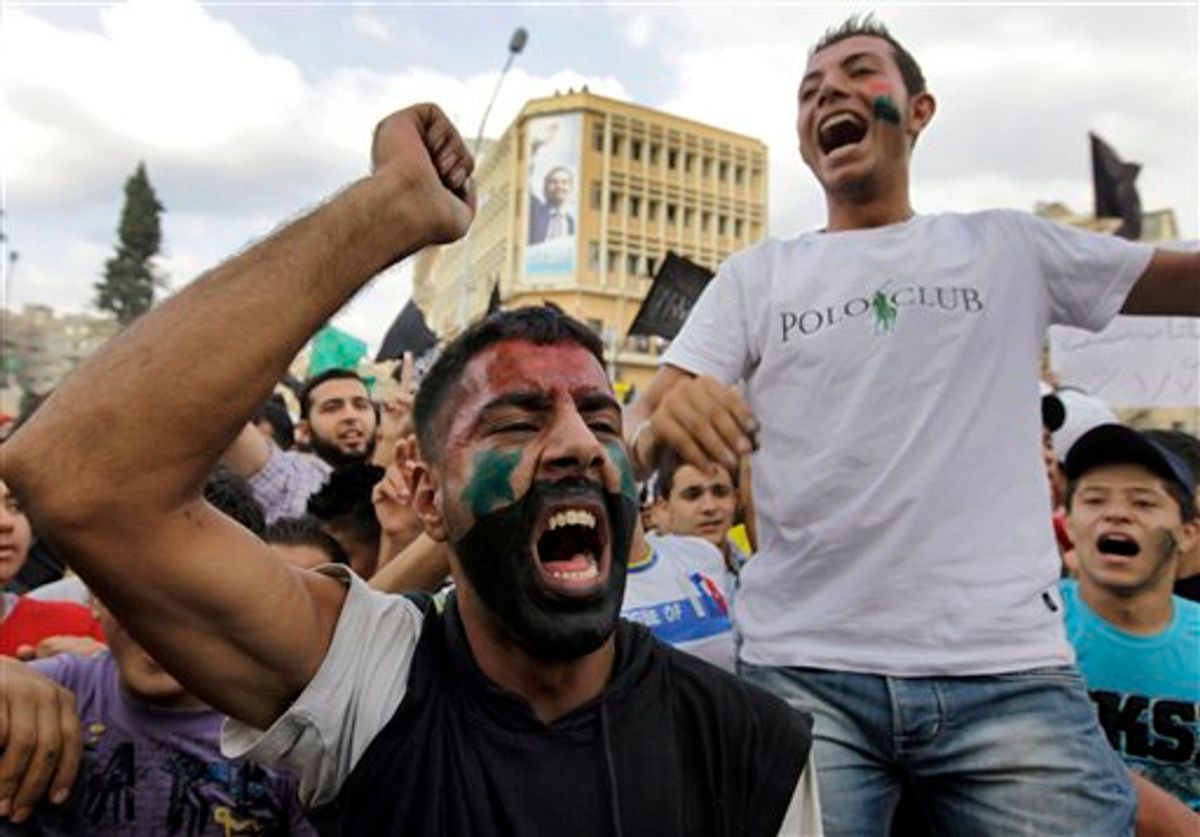 BEIRUT (AP) — Thousands of Syrians poured into the streets Friday calling for the downfall of President Bashar Assad and expressing support for army defectors fighting the regime, as the U.N.'s top human rights official urged the international community to take "immediate measures" to protect civilians in Syria, activist said.

The protests were the most explicit show of support offered so far by the country's protest movement to army defectors who have reportedly clashed with loyalists in northern and central Syria in an increasing militarization of the seven-month-old uprising.

Syria-based activist Mustafa Osso and the Local Coordination Committees, an activist group, said the protests spread from the suburbs of the capital Damascus to the southern province of Daraa, the northern provinces of Aleppo, Idlib and Hassakeh, and the central regions of Homs and Hama, as well as to other areas.

The opposition had called for protests after the Muslim Friday prayers in support of the "Free Officers", in reference to army defectors who have been fighting regime troops over the past weeks. Clashes between troops and gunmen believed to be defectors left at least 25 people dead on Thursday, according to the London-based Syrian Observatory for Human Rights.

The uprising against Assad's regime began in mid-March amid a wave of anti-government protests in the Arab world that toppled autocrats in Tunisia, Egypt and Libya. Assad has responded with a fierce crackdown.

In Geneva, Navi Pillay, the U.N. High Commissioner for Human Rights, warned that the unrelenting crackdown by the government of President Bashar Assad could worsen unless further action is taken. She said the death toll from seven months of anti-government unrest in the country rose above 3,000.

"The onus is on all members of the international community to tale protective action in a collective and decisive manner, before the continual ruthless repression and killings drive the country into a full-blown civil war," Pillay said in a statement.

She didn't elaborate on what measures the international community could take beyond the sanctions already imposed on Assad's regime.

Her spokesman, Rupert Colville, told reporters in Geneva that it was up to the U.N. Security Council to decide what action was appropriate.

But he added: "What has been done so far is not producing results and people continue to be killed every single day."

The U.N. human rights office estimates that more than 3,000 people have now been killed since mid-March — about 10 to 15 people every day. The figure includes at least 187 children. More than 100 people had been killed in the last 10 days alone, the global body said.

Colville said hundreds more protesters have been arrested, detained, tortured and disappeared. Families of anti-government protesters inside and outside the country have also been targeted for harassment.

From The Wires Syria