What do the "1 percent" actually do? 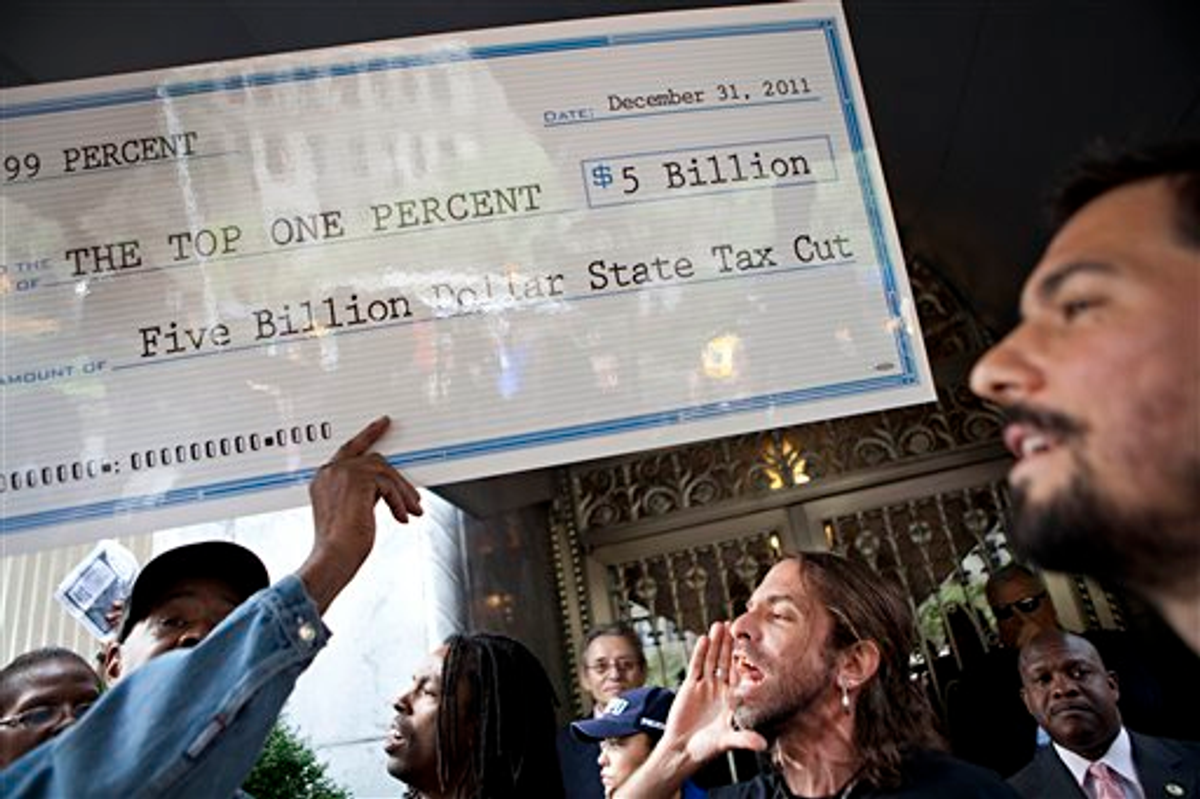 This originally appeared on New Deal 2.0.

Look, a crazy anti-capitalist anarchist carrying a bizarre sign incompatible with the basic tenents of liberals: A lot of emphasis is on the "99 percent" versus the "1 percent" in these protests. But who are the 1 percent and what do they do for a living? Are they all Wilt Chamberlains and Oprahs and other people taking part in the dynamism of the new economy? Nope. It's same as it ever was -- high-level management and the financial sector.

Suzy Khimm goes through the numbers here. I'm curious about occupations. I'll hand the mic off to "Jobs and Income Growth of Top Earners and the Causes of Changing Income Inequality: Evidence from U.S. Tax Return Data" by Bakija, Cole, and Heim. This is the latest and greatest report on occupations and inequality. Here's a chart of the occupations of the top 1 percent:

It boils down to managers, executives, and people who work in finance. From the paper: "[o]ur findings suggest that the incomes of executives, managers, supervisors, and financial professionals can account for 60 percent of the increase in the share of national income going to the top percentile of the income distribution between 1979 and 2005."

For fun, there are more than twice as many people listed as "Not working or deceased" than are in "arts, media, sports." For every elite sports player who earned a place at the top of the income pyramid due to technology changes and superstar, tournament-style labor markets that broadcast him across the globe, there are two trust fund babies.

The top 1 percent of managers and executives often means C-level employees, especially CEOs. And their earnings versus the average worker have skyrocketed in the past 30 years, so this shouldn't be surprising: How has this evolved over time?  Can we get a cross-section of that protest sign above?

Same candidates. There's a reason the protests ended up on Wall Street: The top 1 percent and top 0.1 percent comprises all the senior bosses and the financial sector.

One of the best things about Occupy Wall Street is that there is no chatter about Obama or Perry or whatever is the electoral political issue of the day. There are a lot of people rethinking things, discussing, learning, and conceptualizing the kinds of world they want to create. Since so much about inequality is a function of the legal structure known as a "corporation," I'd encourage you to check out Alex Gourevitch on how the corporate is structured in our laws.

The paper notes that stock market returns drive much of the manager's income. This is related to a process of financialization, something JW Mason has done a fantastic job outlining here. The "dominant ethos among managers today is that a business exists only to enrich its shareholders, including, of course, senior managers themselves," and this is done by paying out more in dividends that is earned in profits. Think of it as our-real-economy-as-ATM-machine, cashing out wealth during the good times and then leaving workers and the rest of the real economy to deal with the aftermath.

Both articles mention chapter 6 of Doug Henwood's "Wall Street"; anyone interested in how things have changed and where they need to go would be wise to check it out. It's even available for free pdf book download here.

There's good reason to focus on the top 1 percent instead of the top 10 or 50 percent. There is evidence that financial pay at this elite level is correlated with deregulation and the other legal changes that brought on the crisis. High-ranking senior corporate executives' pay has dwarfed workers' salaries, but is only a reward for engaging in shady financial engineering practices. These problems require a legal solution and thus they require a democratic challenge and a rethinking of how we want to structure our economy. Here's to the 99 percent and Occupy Wall Street helping get us there.