Why would anyone remake "Footloose"?

Let's hear it for the boy, again? The Kevin Bacon movie gets a reboot, and aging Gen Xers groan 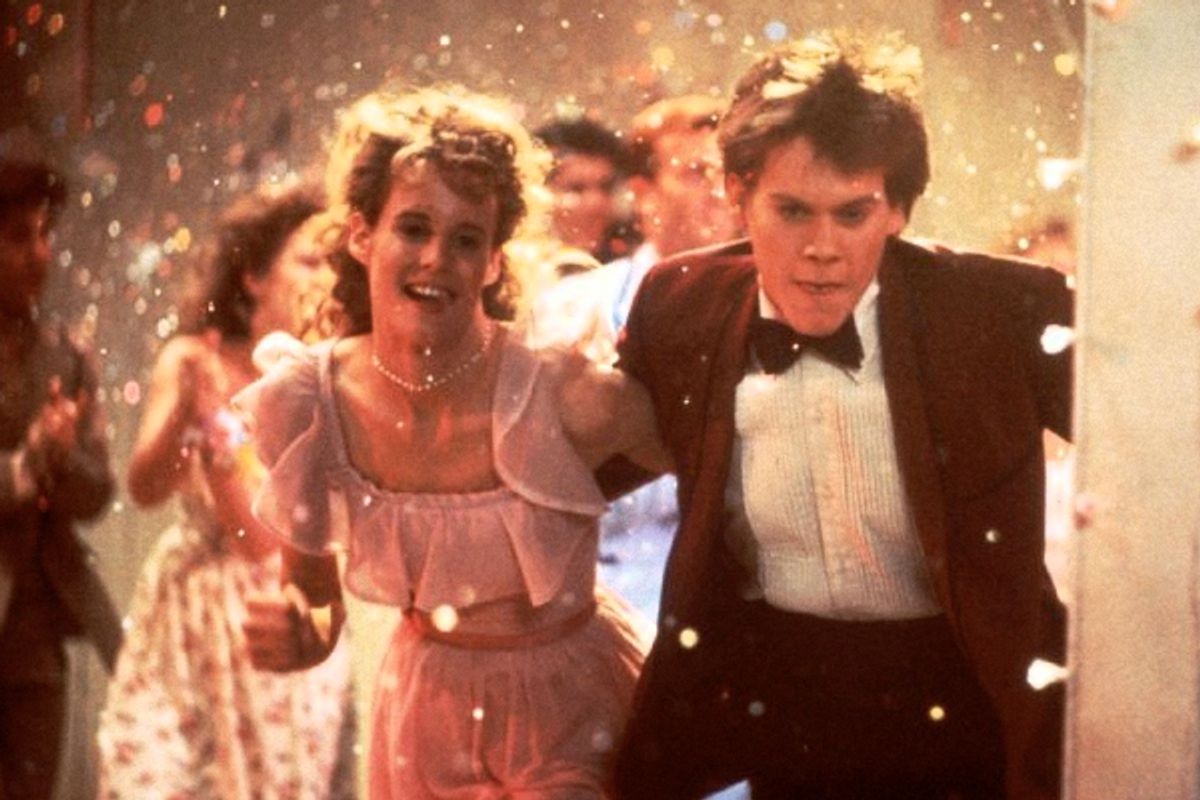 It was the year that Wendy’s ads popularized the phrase “Where’s the beef,” the Detroit Tigers were one of the hottest teams in baseball and a dance movie called “Footloose,” starring mostly unknown actors, was released.

Of course, all of those events happened for the first time in 1984. But while Clara Peller of the Wendy's ads is long dead and these Tigers' World Series dreams teeter precariously, the “Footloose” remake out today bares a comfortable resemblance to the Kevin Bacon near-classic released 27 years ago — the same year, incidentally, that its star Kenny Wormald, was born.

Wormald plays Ren MacCormack, the character created by Bacon. Ren is a big city boy (Chicago then, Boston now) who finds himself in a small town where dancing and loud music have been outlawed. In the original film, the merriment is prohibited because the town’s reverend (John Lithgow) is a religious fanatic who fears for the teenagers’ souls. He also doesn’t like his foxy daughter (Lori Singer) hanging around with Ren. In the 2011 edition, a tragic car crash in which five teens were killed coming home from a dance is the plot engine which leads to a teen rebellion and the eventual need for Ren to help everybody lose … their blues.

But why now? And why, at all? It’s not entirely uncommon for films to be remade, and even horror movies from the 1980s have been brought back from the undead to some success. But after the stunning popularity of last year’s "Karate Kid" remake (biggest difference: no karate), another hit from 1984, the barn door crashed open. If a movie was a hit once, why wouldn’t it be again?

“There’s a generation now that would find a whole new meaning in this story,” Craig Zadan, a producer on the "Footloose "remake who also produced the original, has said. But, of course, this whole new generation could easily watch the original "Footloose" by adding it to their Netflix queue, or checking out a few choice snippets on YouTube. Few teenagers in 1984 would be caught dead watching a youth film from the late 1950s – it pretty much was a different universe. But the same is not true of decades-old films today. But today’s teens are just as likely to have seen "Ferris Bueller’s Day Off" as '80s kids were.

Jen Chaney, an entertainment reporter and Celebritology blogger for the Washington Post, says that when it comes to remaking certain '80s movies, “I tend to have a knee-jerk reaction — oh, why are they doing that — and I certainly felt that way with 'Footloose.' " When she recently listened to music from the new soundtrack (which includes Blake Shelton covering the classic Kenny Loggins title track), she found herself longing for the old days, when a "Footloose" soundtrack meant you’d be hearin’ it for the boy, needin’ a hero, and dancin’ in the sheets. “I was like, what’s going on here? Where’s the Shalamar?”

The real reason for the remake, of course, is probably this: Hollywood -- like the rest of America -- is nervous about its bottom line, and thus hesitant to take a chance on new ideas. In an era when there’s no longer such a thing as a sure thing in Hollywood (see "Eat, Pray, Love"), cashing in on nostalgia can provide nervous studio execs with a bit of comfort. Rebooting "Footloose" guarantees built-in brand recognition and an audience of both Gen-Xers who might want to check out how the remake compares to the original, and a younger audience who have at least a passing familiarity with the 1984 Herbert Ross film (the marketing pretty much presupposes knowledge of the original).

On the chance you need convincing that this remake might be at least as much about commerce as it is art, check out the "Footloose Collection" currently on sale on the Home Shopping Network. (Oh that I were kidding.)

Sometimes, an '80s story can truly be retold in a fresh, original way, thanks to new advances in technology (like "Tron: Legacy"), or compelling developments in our society ("Wall Street: Money Never Sleeps"). But some remakes — like the recent "Karate Kid" reboot with Jaden Smith, seem more about milking nostalgia for all it’s worth, while we're still wondering why anyone said yes to remakes of “Arthur” and “Fame."

But now that the people who were kids in the '80s are in decision-making roles at studios, the trend is likely here to stay: Remakes of '80s films as diverse as "Robocop," "Porky's," "Police Academy" and "Short Circuit" are said to be in the works. It used to be that you would replace your VHS tapes with DVDs, then those with BluRay. Now it seems, we have to replace our original versions of films with their remakes.

“I find this incredibly depressing,” wrote legendary English film critic Barry Norman, “What kind of an industry caters for people dumb enough to enjoy 'Porky’s' the first time round and are still dumb enough to want to see it all over again in a new version?”

Of course, Hollywood has always dined off sequels (Universal’s fourth theatrical helping of "American Pie" is being released next spring), and it’s not uncommon to see more than one filmed version of a novel or an American version of a foreign film. But remakes of still-popular Hollywood films is a more recent phenomenon. In the case of the new “Footloose,” says Chaney, “The mindset is that maybe today’s teenagers would like this movie but because it was made over 20 years ago, they’re not going to embrace it -- so we should remake it. But I think that some kids are more sophisticated than that, and are willing to embrace older films.”

In fact, many of today’s teens consider '80s pop culture the epitome of vintage cool. Think leggings, bangle bracelets and off-the-shoulder sweatshirts. One Houston teen, who I interviewed for my book "You Couldn't Ignore Me If You Tried: The Brat Pack, John Hughes, and Their Impact on a Generation," told me that “you haven’t lived, as an adolescent, until you’ve seen these movies.”

And although it boasts an undeniably modern look, feel, and sound, the new "Footloose" does contain plenty of nods to its original. Writer/director Craig Brewer filmed some scenes as almost shot-by-shot homage’s to original sequences, such as the moment in which Kevin Bacon dances his way through anger management in an empty warehouse. The new film also features Kenny Loggins's original version of “Footloose” at the beginning — although he says he didn’t have any creative input over the remake. (“I even had to call and ask for tickets to the premiere,” he recently admitted on "Access Hollywood Live.")

In defense of the remade "Footloose," it does have a couple of things going for it that the original didn’t — in particular, its leads are professional dancers. (“I’m excited to shut up all the naysayers,” Wormald said to the New York Times), and it does come back to the big screen by way of a successful Broadway adaptation in the late-1990s that later toured across America.

But when it comes to remakes, says Chaney, “if you feel like you have a kinship with these characters or what that movie stood for, and you see somebody taking it in a direction that is counter to what that stood for to you, that automatically feels wrong and that’s what makes people upset.”

So maybe, just maybe … is it possible that those of us Gen-Xers who are getting annoyed over this remake have become the veritable John Lithgows of our time? Should we just back off and let these crazy kids have some fun? The scores of exuberant homemade dance videos submitted by young fans on the movie’s website does suggest that the remake is hitting a chord. And Julianne Hough does look pretty great in the 2011 version of those famous red cowboy boots.

“I remember the first night that I got called to ask if I would do the 'Footloose' remake,” Brewer said. “I had the first reaction that many people had, and that is, why should you remake something that’s a classic. But then all night, I couldn’t let it go. There’s a unique time to be young. And we forget about that when we’re older. We hold those times precious, and that’s why we don’t want them revisited. I knew that a younger audience needed to experience this story.”

Or, as Kenny Wormald says passionately in the film, channeling Kevin Bacon’s insouciance from 1984 but with an energy that is decidedly of the moment, “This is our time.”

Susannah Gora is the author of "You Couldn't Ignore Me If You Tried: The Brat Pack, John Hughes, and Their Impact on a Generation."