Tales of a groomzilla

I\'m part of a new generation of men happy to share the duties of wedding planning. And frankly, I\'m losing my mind 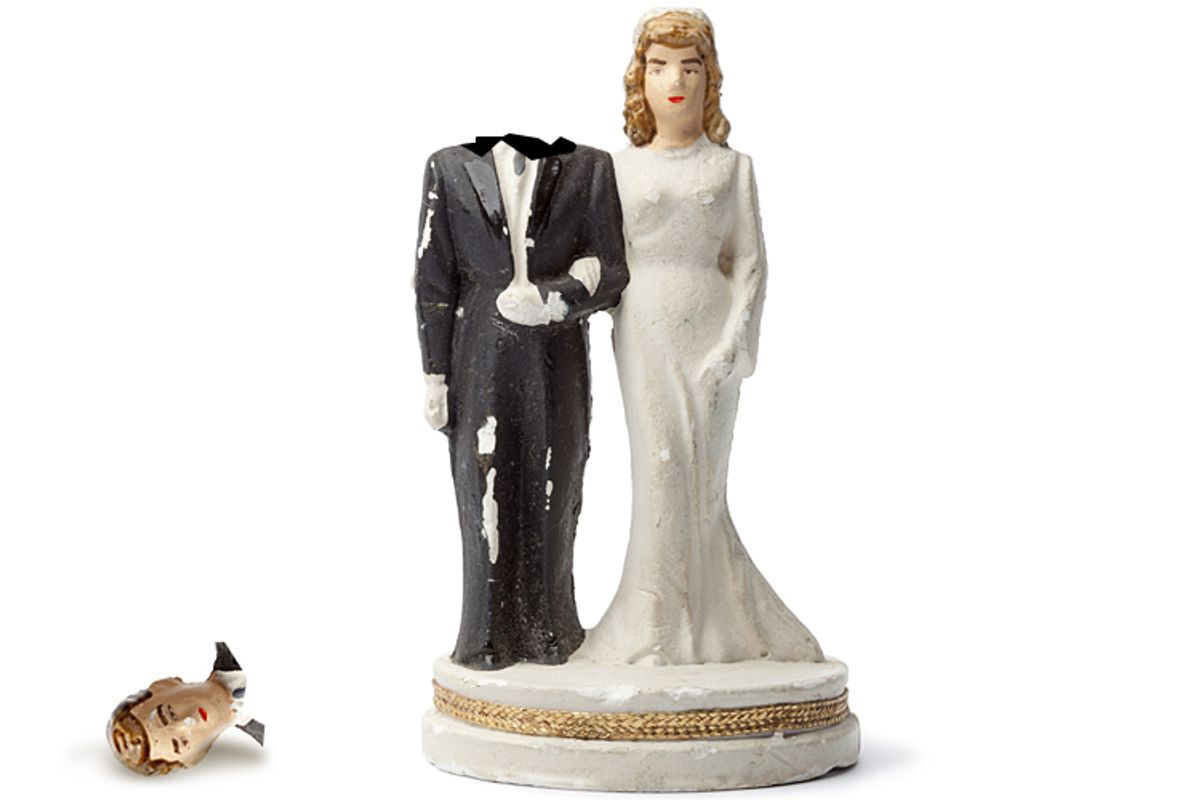 “This photographer has zero talent,” I told my fiancée as we examined the sample wedding album. “I could take better photos with an iPhone jammed up my rectum.”

OK, I’ll admit it: I have become a groomzilla, the increasingly common (and dreaded) masculine version of a micromanaging bride. Oh, I don’t care about the flowers and table linens; I have no requirements of the cake beyond chocolate of some kind. But I'm an equal partner in our wedding day, much like 80 percent of other modern grooms, if Bridal Guide magazine is to be believed. And as the date swiftly approaches, I'm starting to melt down.

“What do you want for dinner tonight, honey?” my fiancée asked earlier today.

“DINNER?” I howled through my teeth-bleaching Crest Whitestrips. “Protein powder, just like we had for breakfast.”

Hey, I just want to look good on the most photographed day of my life. I’m in the best physical health since college -- thanks to daily cardio/resistance/starvation -- and the worst mental health.

It wasn’t supposed to happen this way. “Just tell me where to show up in a tux,” I said at the beginning of this process. “You can handle the rest.”

I thought I was being generous when I replied “whatever you want” to my fiancée’s every question. I wanted her to be happy with every decision, but my agreeableness made it sound like I didn’t care. So I decided to show how much I care. Now I’m frantic over every detail from the guest list to which family members can sit at the same table without brawling. (Yes, we’re inviting Irish people.)

My father doesn’t understand this panic and seems to think I’m a total sissy for letting the pressure get to me. In his day, men had no major responsibilities between the proposal and the wedding. Perhaps this is because cohabitation was so rare back then; it’s impossible for modern guys to escape the madness unless we leave our apartments for the bar around the corner ... and we dread the beer calories too much.

We’re left with a single option: giving a crap. And when men care about something -- whether it’s sports, politics or discovering new foods to pair with bacon -- we give it our full attention.

“When you tell a buddy that you're scouting reception venues this weekend, you're less likely to get openly mocked,” says Jeff Wilser of the groom advice site The Plunge. “It’s less about shifting gender norms and more about cold, hard cash. The groom might not give a damn about ice sculptures, but if he sees that the ice costs $1,000, suddenly he pays attention.”

But in this arena men are completely out of our league; the frequent bickering over inconsequentialities -- for example, ice sculptures -- makes you a worse person and a worse partner at exactly the wrong time. An argument over which hors d'oeuvres to serve at the cocktail hour somehow becomes an existential referendum on your lifelong compatibility.

“Right.” He nodded. “That’s what I thought until my divorce.”

A couple planning a wedding is like a country going to war: You tell yourself it will be quick, affordable and painless -- a cakewalk, a slam dunk -- but soon your treasury is exhausted, you can’t keep the peace between rival tribes, and you suffer from unprecedented domestic polarization. (Also: It becomes a half-century commitment.)

We assumed it would be so low-key. You find a venue, a caterer, a DJ or band, a dress, a tuxedo, and maybe some flowers. That’s it, yes? How could this possibly take more than a couple weekends of searching, max? Other couples who claim to go through hell planning their weddings are just being melodramatic or unrealistic, right? We won’t give our friends letter grades and proceed to cull them; we won’t agonize over finding a band that isn’t goateed, toupéed, ponytailed, corpulent and otherwise depressing.

Last year a friend of mine drove to Vegas with his girlfriend on a whim and found the nearest Elvis impersonator to officiate. At the time I thought he was nuts -- why wouldn’t you want your family and friends to share the moment? -- and I told him so.

“Go ahead and scoff,” he said, “but your big, fancy ceremony will get very expensive, very tense, very fast. You’ll fight with each other, with your parents, with her parents ... I have no regrets.”

Now I wish that I could pay a mutton-chopped dude in a rhinestone jumpsuit his $300 honorarium. This has been the most difficult 12 months of our eight-year relationship; neither of us likes the person we’ve become during this process. With a mere couple of weeks left before we tie the knot -- dealing with the inevitable last-minute crises such as RSVP changes and rings that don’t quite fit -- we’re knotted up, losing our cool for no good reason. She’ll cry because I don’t care which set of plates goes on our registry (because I am a man), and then I’ll spend the next day muttering passive-aggressive, petty insults about her estrogen levels (because I am a man).

“It’s so gray outside,” she observed yesterday. “Summer’s definitely over.”

“Yeah, life is hell, huh?” I snapped, reading way too much into a comment about the weather. Because everything is magnified through the prism of F-O-R-E-V-E-R.

You’re born, you get married, and you die; the second is extra significant because you don’t get to plan No. 1 or No. 3 (unless you kill yourself, an increasingly attractive option). You can get so worried about the future that you manage to jeopardize it, but a wedding should never ruin a marriage. Sure, it’s the ultimate rite of passage, mythologized in our psyches all the way back to the Disney movies that we absorbed as children, so it brings out the crazy from everyone within its orbit. With men helping orchestrate the festivities in unprecedented numbers, more and more couples will find themselves at the breaking point ... and beyond.

But we won’t let this happen. Not to us. Not now. All of the financial overload, family drama and other hassles won’t matter in the long run. All that matters is we’re taking this leap of faith together for a reason, even when the universe seems to exist for the sole purpose of crushing our bond. So whenever I begin to freak out -- whether it’s a legitimate reason, or because we have only 18 centerpieces for 19 tables -- I’m going to remember why I asked her to spend her life with me.

Because I can be myself around her. Because we can still learn new stories about each other’s childhood. Because she introduced me to "Star Trek." Because we have so many inside jokes, and we don’t even remember when the punch lines originated. Because she makes me feel young, and I’m not even 30 yet. Because I can’t enjoy dancing with anyone else besides her, preferably in our pajamas. Because we’ve already stayed with each other for better and for worse...