Will a new Dylan emerge from Occupy Wall Street?

A new generation of activists has taken to the streets. Will a new form of protest music follow? 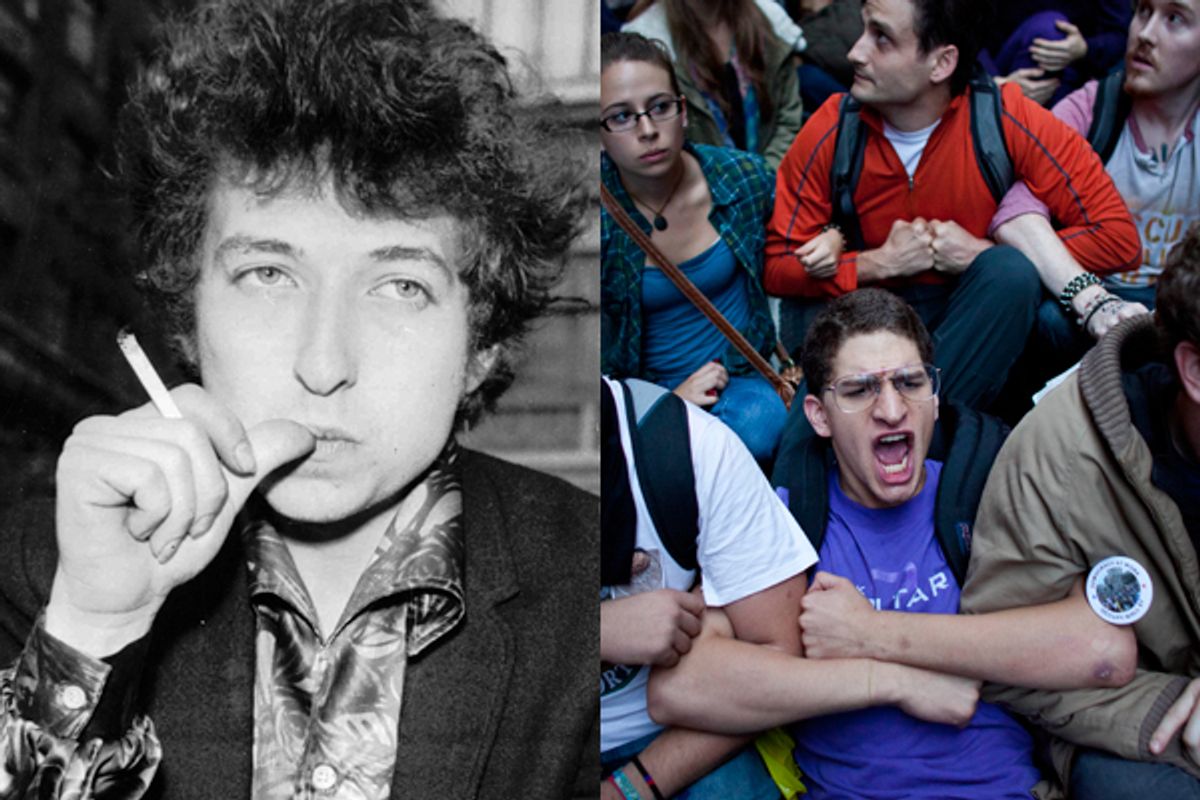 Of the many musicians who have appeared at an Occupy Wall Street event to play, show support or simply check out the scene, the one who has arguably generated the most attention is Jeff Mangum, frontman for the long-dormant Athens, Ga., band Neutral Milk Hotel. On the evening of Oct. 4, he performed a surprise acoustic set of eight songs before an excited crowd at Zuccotti Park. It was a surprise not only because the performance was not announced beforehand, but also because Mangum has performed only a handful of times since his band released its triumphal second album, "In the Aeroplane Over the Sea," 13 years ago. Even as that record has grown increasingly popular over the years, he has remained a legendary hermit, shunning the spotlight and making music only privately.

Mangum played mostly songs from "Aeroplane," which convey a sense of world-shattering loss through the strange imagery of two-headed boys, burning pianos and fingers notched Cronenberg-style into spines. Aside from a short Minutemen cover (“Themselves,” which begins, “All those men who work the land …”), there were few overtly political statements during his set. In the video, you can hear someone yell,  “Play some Dylan!” and the crowd sang along with the line “We know who our enemies are” on “Oh Comely.” Before he left the stage, Mangum told the crowd: “You guys have done a beautiful fucking thing.”

As Occupy Wall Street has gained momentum, it has been compared to the anti-war and civil rights protests of the 1960s by commentators as diverse as comedian Dick Gregory, Republican presidential candidate Herman Cain and scores of newspaper columnists. Yet, as Mangum’s performance demonstrates, they are very different in at least one regard, however minor: Music is not quite the central force today that it was 40 and 50 years ago, when a song like “We Shall Overcome” or “Fixin’ to Die Rag” could communicate certain motivating ideals and reinforce solidarity among a great throng of participants. Instead, it remains peripheral. Mangum and other artists — including Amanda Palmer, members of Radiohead, Tom Morello of Rage Against the Machine and Talib Kweli — are obviously sympathetic to the demonstrators, but their music has not necessarily been intended to carry the weight of direct political statement.

Has the art of the protest song faded? In the 1960s and during earlier protests, “musicians were invested with such significance that they were expected to provide answers to the world’s problems — even to spearhead a revolution,” writes Dorian Lynskey in his recent book, "33 Revolutions Per Minute: A History of Protest Songs, From Billie Holliday to Green Day." “For a songwriter coming of age now, the idea that music can, and should, engage with politics seems increasingly distant.”

Perhaps, but the decade since 9/11 has seen massive upheavals in art and politics, which means we are only just learning new ways to combine the two. Immediately following that event and in the months leading up to the invasion of Iraq in 2003, the bulk of the politically minded music came from the right — most notoriously Toby Keith’s “Courtesy of the Red, White & Blue (The Angry American),” but also Darryl Worley’s pro-war “Where Were You” and Chely Wright’s “Bumper of My SUV.” Dissenting voices were either largely ignored or, in the case of the Dixie Chicks, aggressively maligned.

However, as that war continued with no visible progress or identifiable endpoint, the pendulum swung to the left, and diverse acts such as Pearl Jam, Norah Jones, TV on the Radio and Rhymefest took up the subject from a slightly more oblique angle. Instead of vocalizing opposition to the war, they worked more to document life during wartime and to examine their own uncertainty and alienation. They struck “a mood somewhere between resignation and a siege mentality,” wrote pop critic Jon Pareles in the New York Times almost five years ago. “Awareness of the war throbs like a chronic headache behind more pleasant distractions.”

Of course, Occupy Wall Street is not an anti-war protest. Instead, it has more to do with the same economic concerns that Woody Guthrie protested in the 1930s and 1940s: the ever widening rift between the haves and have-nots and the corruptive entanglements of government and business. These issues have a similar “chronic headache” effect, and the country’s economic woes inform so much music today, occasionally as a primary subject but more often as a backdrop against which life plays out in music. That’s the milieu of acts like the Drive-By Truckers, another Athens band whose songs are set mostly in a volatile red-state South. With great sympathy and insight, they write about characters at loose ends both financially and spiritually, and songs like “Space City” and “The Righteous Path” offer more sobering and realistic portrayals of small-town American than any of the myths perpetrated by D.C. or Hollywood. Significantly, they don’t ally themselves with one side or another, but instead take a documentary approach to post-9/11 America.

Even a song as rousing as tUnE-yArDs’ “My Country,” off her rambunctious and highly praised second album, "w h o k i l l," is less about recession-era politics than frontwoman Merrill Garbus’ own experiences growing up poor and reading third-person accounts of her childhood. Because it boldly commandeers the national anthem for what is essentially a breakup song with a nation, it might make for an intriguing OWS anthem, especially with its questioning refrain, “When they have nothing, why do you have something?” Still, “My Country” reveals just how circuitously contemporary musicians address politics and protest, as if skeptical of the baby boomer doctrine that pop music can change the world.

Even during wartime, politics can be slippery terrain even for the most revered or well-intentioned artist. For every group like the Truckers or tUnE-yArDs, there is an act like Conor Oberst and Steve Earle, who tackled politics head-on in the 2000s and lost their footing. In 2005, Oberst released a single titled “When the President Talks With God,” a protest song aimed explicitly at Bush and so squarely in the '60s mode that it was like he had consciously decided to try to live up to the "new Bob Dylan" label he'd long been saddled with. Yet, for all its outrage, the song isn’t particularly well conceived or executed: “When the president talks with God,” Oberst sings, “are the conversations brief or long? Does he ask to rape our women’s rights?” Those are the first three lines, so there’s really nowhere else left to go. Similarly, Earle’s politicized country-folk in the early 2000s represent the nadir of his storied career. “John Walker’s Blues,” about American Taliban John Walker Lindh, may have been incredibly controversial in 2002, but his approach came across as far too self-conscious. And the less said about his tongue-in-cheek love song to former Secretary of State Condoleezza Rice, the better.

The lesson of the 2000s seems to be to approach politics obliquely instead of head-on, to make it one concern among many. If protest songs are largely absent from Occupy Wall Street, it’s not that they aren’t being written. It’s that they no longer serve the same purpose they once did -- and are so spread out across genres and audiences that they don’t register as broadly as they once did. In other words, artists as well as their audiences must rewrite the rules of protest music so that it applies to the current moment instead of the past.

On the other hand, protests inspire music, not vice versa. Perhaps the artists participating in or even just witnessing the Occupy Wall Street gatherings will be moved to write about their experiences. Perhaps the next great wave of radicalized pop is just a few months or years away. In the meantime, this generation has simply found new ways to approach the subject, both in and out of music. And in the end, who’s to say that Mangum’s two-headed boys and airplane funerals aren’t ultimately political in some sense? They’re certainly rousing, and in Zuccotti Park, that was enough.