"Dexter" gets its mojo back

An elderly serial killer, a great Dex and Deb scene, a mordantly beautiful closing montage; what's not to like? 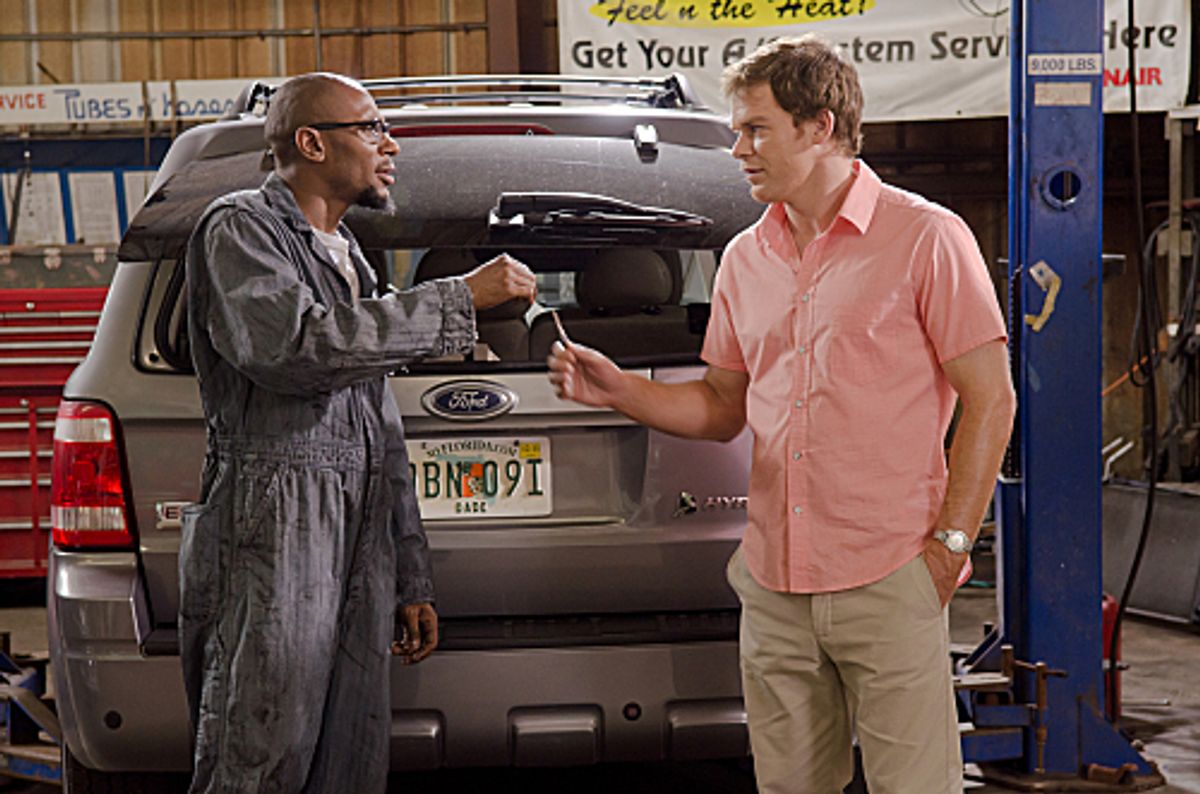 [This recap contains spoilers for "Dexter" season six, episode three; read at your own risk.]

The ceaseless theological table setting is done, gone. The characters are acting as if they remember who they’ve been for five seasons, or taking steps in other directions that connect with their history. Yes, we still have to endure the irritating presence of Ryan (Brea Grant), a squinty Manic Pixie who stops the show dead in its tracks in every scene that she blights. And yes, the show hasn’t quite found a unifying tone to reconcile its wildly contrasting elements — Jesus freak Grand Guignol, salsa soundtrack cues, class redemption stories, pre-mid-life anxiety attacks, telenovela-like melodramatics -- but now I want to trust that all of it will be smoothed over. With its third episode this season, "Smokey and the Bandit", the show has reclaimed some of its Gothic texture, with a literally darker image, while cordoning the ill-advised "zany" humor to a single bit of golfing goofiness (don’t ask). And our favorite mordantly detached observer of human foibles is back, if not at full force, at least in three-quarter sail.

Before we get on with recapping proper, I want to note that Mos Def’s Brother Sam -- who, if you don’t mind, I’m shortening to B-Sam -- is a terrific addition to the show. Everything he says has a fascinating attitude of deference -- to God, to some dark place in himself, perhaps to Dexter’s Dark Passenger, you never know. He’s like somebody whispering the cure to your diagnosis; it’s only natural to lean forward a bit to find out what the deal is. And Dexter (Michael C. Hall) is very, very interested, because B-Sam’s whisper-stream has to do with being recovered from the absolute dark of life-taking.

This episode should have been titled "Kill Your Idols." Things kick off with a female floater washing up on the beach minus a tooth. A bitter Quinn (Desmond Harrington) -- heart fully broken by the recently-promoted Deb (Jennifer Carpenter) -- shows up late to the scene, in time for Angel (David Zayas) to see him sloppily making out with some sleazy beach bunny. Again being the jerk we’ve enjoyed disliking for all these years, he asserts to Angel that he’s basically double-whipped by both Deb and Captain-by-way-of-blackmail LaGuerta (Lauren Vélez). Angel, being an angel, doesn’t clock him.

At Miami Homicide, LaGuerta, aka the show's Evil Queen, tries to make Deb’s first day as Lieutenant hell on Earth, and spends the episode trying to stop Deb from hiring the person she wants to take her old job. Back at the beach, the floater's missing tooth is making Dexter wax nostalgic. In another scene, we see Dex rifle through his childhood clipping book of favorite mass murders with his ghost Dad (James Remar) sitting proudly next to him. Hall and Remar don’t work this as jokey sitcom macabre: they play it straight, and we recall how honestly twisted the show can get.

We also find out that Dexter's favorite serial killer, like, ever, was Oregon’s Tooth Fairy. And that the floater was found near a retirement home without a tooth ... and, no, it couldn’t be, could it? Why, the Tooth Fairy would have to be seventy by now! And why would he be in Florida? Dexter’s voice-over asks, "Why do most seventy year olds come to Florida?" The comes a perfectly timed cut to a sign: "Coral Island Retirement Home." (I half-expected a rimshot.)

Claiming to be looking for his own dear old Dad, but actually looking for anyone who’d fit the Tooth Fairy’s profile, Dexter strolls around the home, considering the elderly Coral Islanders as they totter about in gaily-colored polyesters, play ball games and drink tropical-colored fizzy drinks. His voice-over chin-strokes the notion that extreme old age is like a second childhood. "I barely made it through my first childhood, I guess none makes it though the second." Why is Hall awesome? Because lines like this become gold when spoken with his deadpan brand of drollery.

And then the show becomes garbage. 'Cause it’s Ryan time. Wearing a yellow wifebeater this week, she coos and squints and prick-teases Masuka (C. S. Lee) and goes gaga over evidence from an earlier mass murderer, a dismembered hand, and tell him how she used to paint her nails the same color as the hand’s nails. "Is it wrong that it makes me hot?" Seriously; she says that, eyelashes batting. I wonder how many hundreds of thousands of people tune in to see Dexter and upon seeing this boop-boop-be-do in a pleated skirt, turn instead to reruns of, like, anything.

Anyway, as if fully aware of what a terrible idea Ryan is, the show quickly cuts to the answer to all problems, Deb. She’s trying really hard to be authoritative and classy for her first muster room meeting with her crew; she’s even wearing a slate-brown jacket she probably bought at H&M over her usual jeans and plain shirt mufti. She’s doing a good job when Vince the Dick contradicts her and LaGuerta the Evil Queen supports him our of sheer rotten-heartedness. But Deb soldiers on.

Over at that Hammer horror church, Professor Gellar (Edward James Olmos), who's managing to make an off-white cardigan look like the sweater of evil, and his sweaty, way-beyond-merely-creepy follower Travis (Colin Hanks), have some guy handcuffed in a cobwebbed room. "Tell God you’re sorry!" Travis insists. The guy is totally sorry. Professor Gellar, who’s in another room painting a mannequin head -- there’s actually a decent payoff for this -- remains unimpressed. Something incredibly bad is going to happen. But not yet.

Back at Coral Island, it’s golf day with Walter (Ronny Cox), the person Dex thinks best fits the Tooth Fairy profile, except he’s a grumpy old bastard with a bad back who complains about his grown, ungrateful son and who reads magazines like "Teen Ass Nipple Parade" to get off. If this is what’s left of Dexter’s childhood hero, man, that’s harsh. If this is what the future holds for Dexter, worse. And Harrison? Let’s not even go there. Still, getting his hero on his table, even in his current diminished capacity -- that would be awesome, like playing Guitar Hero with an actual guitar hero.

It’s when Dex goes to B-Sam’s car repair to pick up his auto that I realized that, aside from the Ryan absurdity, this is a damned decent episode. Even when Dex stops by B-Sam’s to pick up his car, there’s little God talk, just Def being cool and mysterious and possibly a true redemptive soul. (Or not.)

Then we’re back at Dex’s for one of those Deb/Dex heart-to-hearts that makes an often grim show precious. This is Deb beyond the surreal curse phrases and gangly body language freak-outs, the very quiet insecure tomboy talking about her fear of not knowing how to lead, of being her ex-BF’s boss, of having to deal with stacks of paperwork taller than she is, and Dexter uttering a slight encouraging phrase here and there, believing there’s nothing she can’t do, and then, before things can get all sugary, requesting a raise so that Deb can yell, "Fuck off and die!" Awwww.

Speaking of which, Dex has his own killing to (possibly) do. So it’s back to Coral Island where Walter opens his apartment door wearing only his tightie-whiteys. Aghast, Dex takes him to get a ‘scrip filled for his bum back. And we’re off to the pharmacy and what would be a flawlessly exciting rise-and-fall of discovery, action and realization leading to a poetic cascade of montage were it not, again, for Ryan, who (it’s becoming clear) is not just a dash of pixie dust, but the show’s official indie girl, a de-gothed version of NCIS’s Pauley Perrette minus the charm, and with a sex addiction and ulterior motives. Instead of time spent with Angel -- or with LaGuerta explicating why she’s become so awful, or with a potted plant -- we get Ryan squinting and bopping and letting us know how adorable she thinks she is. How could a person be so wrong?

For no reason, she flirts with Quinn. When Masuka pitifully asks her out for some Vietnamese food, she somehow turns a "Yes" into a cruel tease about how, in the right light, Masuka is actually very cute. Then she nearly jumps up and down as she bleats, "I love homicide!" I guess we’re supposed to think, "Whoah, she’s just like Dexter!" If Ryan turns out be Dex’s next lover, I predict a fan uprising that will ensure no one has to worry about a season seven.

Walter asks Dex to drop him off at a one of a row of storage facilities. Dex is all, WTF? Back at church, Travis’ victim frees himself just in time to be stopped by a wild, rearing horse as Doctor Gellar pronounces, "He’s ready."

Walter needs a ride. Dex picks him up. Walter has a gun; he aims it at our hero, says he "Gogled" him, found out he’s with the cops. Dex proactively crashes the car.

That Ryan nonsense we talked about? It happens here. Let's just skip ahead to Deb.

A towering cop named Mike Anderson (Billy Brown) shows up and, thinking Deb is some beat cop, promptly starts treating her like crap. Amused, Deb listens and then lowers the boom, informing him that the lieutenant he’s looking for -- the one who chose him to take her old job -- is standing right in front of him. Bottom line: This means LaGuerta loses. It’s a good day to be Deb.

Walter, meanwhile, is on Dexter’s table. The old bastard is still full of piss and vinegar. He mocks Dex, saying he’s no different, that he’ll also end up a miserable old man unable to even kill someone properly. The darkly float-y image montage that follows the punching of Walter’s clock made me imagine what a Cocteau Twins CD cover would look like if it were a "Dexter" episode; it's so good that even Ryan’s peppy visage can’t ruin it. There’s a weirdly gorgeous shot with the camera looking up from the sea floor at Dexter dumping Walter’s box of teeth into the water; the teeth, like tiny white fish, float this way and that. In voice-over, as the show’s uncanny glissando theme plays, Dexter mulls finding meaning as we age, and what we might wish to pass on; the camera floats in a horizontal line past Quinn, pitiful now, bedding some anonymous person, past Ryan, stealing evidence, and finally Dex, first giving Harrison a plastic horse to play with and then pulling out his box of glass victim blood slides, grinning desperately, crazily, only to drop them in a tumble; they shatter across the floor. "I don’t know which slide goes where," he says, “Who's who, there’s no order anymore."

It’s horrific and sad. It’s what Dexter is supposed to be.

And then comes a shock cut to a full daylight parade of horses with pale riders made of chopped up body-parts, which jumps us into next week nicely.

Were I able to control the multiverses a la Doctor Who, this crazy, mordant and ultimately beautiful installment would have been season six's  first episode.