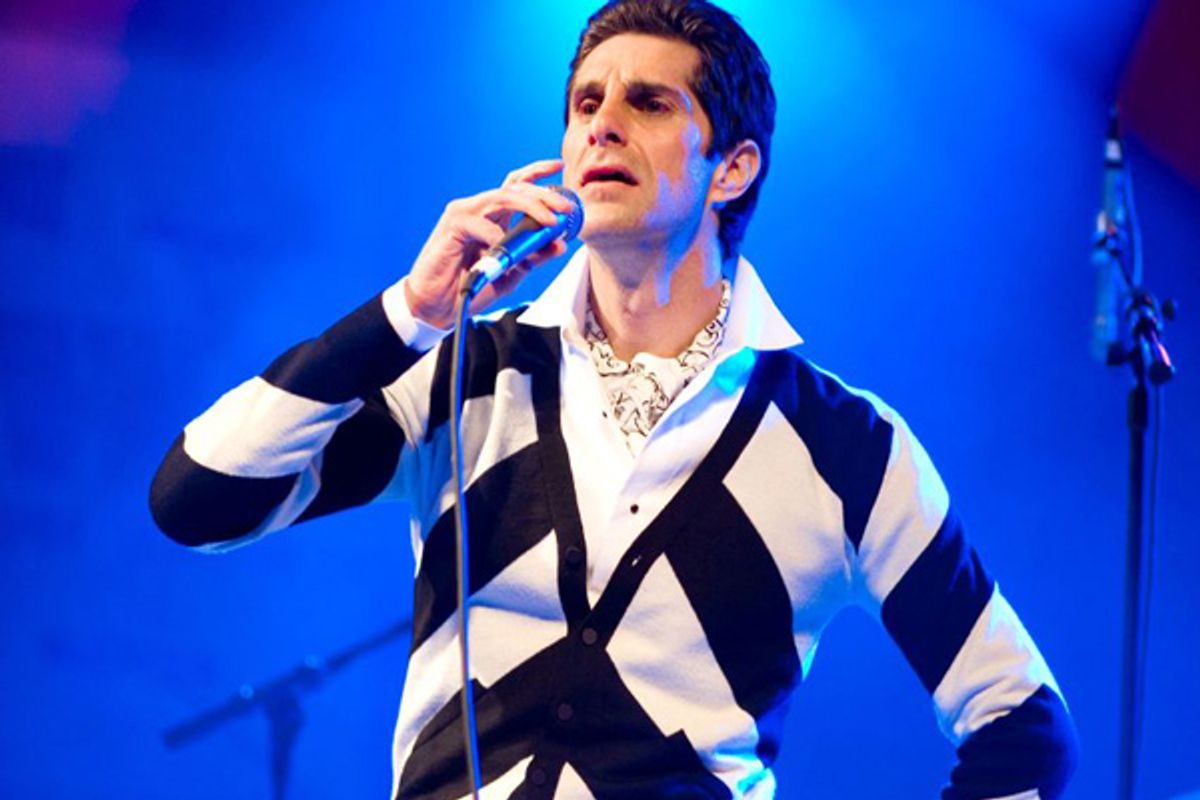 With so much Alternative Nation nostalgia swirling around music lately, it’s fitting that legendary L.A. rockers Jane’s Addiction are releasing their first album in eight years on Tuesday. Don’t expect any sort of starry-eyed retro rehash or sly winks to the past, however: "The Great Escape Artist" is a strikingly modern album. Sleek keyboards with a slight metallic sheen and hints of electronic programming spruce up the classic Jane’s hallmarks: Dave Navarro’s snaking guitar solos, Stephen Perkins’ tribal drumming and Perry Farrell’s inimitable helium yowl.

A big reason why "The Great Escape Artist" sounds so vibrant has to do with its creative team. Although produced by Rich Costey (Muse, Interpol), the album features writing, programming and bass contributions from TV on the Radio guitarist/keyboardist/programmer Dave Sitek. The latter’s work with Yeah Yeah Yeahs, Foals and his own band is wildly creative, atmospheric and steeped in dynamics -- in short, the perfect foil for Jane’s Addiction, whose sound is a patchwork amalgam of hard rock, funk, post-punk and psychedelia. Even when they saturated radio with the acoustic lament “Jane Says” or misfit jitterbug “Been Caught Stealing,” the band never quite sounded like anything -- or anyone -- else around.

For frontman Farrell, Jane’s Addiction is just one of his endeavors. He’s frequently involved in charity events and benefit concerts, he’s a staunch environmentalist and, most notably, he’s overseen the reactivation of Lollapalooza, which is now a multi-day music festival in Chicago (and, as of this year, also in Chile). But it’s all in keeping with Farrell’s forward-looking mindset, which he stressed during a recent phone interview with Salon about the state of Jane’s in 2011.

The new record sounds like Jane’s Addiction in 2011. But actually, it also reminded me of U2 in some places.

U2 is a great group. As far as inspiration goes, though, they were not really accounted for too much, I would be honest to tell you that. Pink Floyd or Joy Division or New Order -- those were the heavy influences. But they were only influences to us in method -- "method" meaning live players with a little studio magic. That was really the premise. And what we have today in the way of studio magic added into Jane’s Addiction, the band.

Those bands are very atmospheric and dynamic, and that’s what struck me about this record, too.

Absolutely. We want to create a mood; we had a theme, and the theme was escapism, ways to escape. I had to be autobiographical about that. And my time and my chances to escape sounds like the record. [Laughs.] The dark, dark times of the night, you know, when most people are asleep was basically when I did my living.

What drives Jane’s Addiction’s studio urges in 2011, as opposed to maybe what drove the band back in your earlier days?

Back in the early days, we didn’t have computers to even consider -- computer software, synths, guitar synths, software. Now we’ve got all these things to consider while making music, and we want to make use of the best hardware and the best software that we have around us. Those modern tools generate new sounds, sounds you couldn’t get back in the '80s. If you ignore them, then you’re ignoring 25 years' worth of progress that the world is... I don’t want to say used to hearing, but they expect to hear new sounds. If you give them the same [sounds], it’s like opening up an expired bag of potato chips. It’s just stale. You need to have something fresh for them -- and then something familiar too, because they like familiar.

But if it’s all familiar, it’s like... why is it that the blues are not so popular anymore? Because we’re just used to [them]. The world needs something to bite on, to nibble on, that is unfamiliar as they evolve. But it’s gotta be something that once [people] digest it, they like it enough that they feel like they’ve learned something or become smarter from it. It’s fortitude. It’s nutrition. That’s how you write today in a modern scenario, a modern band. We use this method in writing music, and we did not want to ignore that or bypass that method because we wanted to play it safe. We live dangerous lives, I would say. Our lifestyles are somewhat dangerous. And we wanted that to be represented in the music, so we [made] a dangerous record. [Laughs.]

In that sense, having Dave Sitek involved is perfect. He’s an amazing producer, and so good at getting modern sounds that do challenge the listener.

And he is dangerous.

Those are two dangerous things, in very different ways.

I like reading, and I do like fighting. But I could see where he was coming from, where maybe if kids would pick on him, he’d punch ‘em out. To be honest with you, I kind of like that in a man; he doesn’t let people get away with picking on him.

We got together and we listened to music. He came to my garage, where I had my studio, and I played him everything I was writing at that time; I was writing lots of electronic music. He listened to all of it and was really psyched. He went home and called me the next day and said, “Hey, man, I’m really excited.” He said there were two bands on this planet that could pull off what I want to do with music. And Jane’s Addiction’s one of them.

Yeah. I just trusted him from there. He liked where I was going with my electronic music, but we both understood it wasn’t going to be an electronic record by any means. But it was going to be adventurous and not be [cowardly] in its approach. We were going to consider every possible method of making sound, and then just pick the best sounds. We went into hours and hours of jamming and then hours and hours of layering, and that’s how we came up with the sounds that eventually came to be recorded.

So many bands that have been around for so long, like you guys have, are afraid to take risks. They’ll write a variation on their most popular stuff, because it’s what people know. And it sounds like a copy.

I consider myself to be an artist first. And as an artist, my first obligation is to art. To sit there and draw the same thing over and over would be no fun. It’s the same thing with music; to record the same thing over and over is no fun. For me, you can count me out if you’re going to go about it that way. But if you want to get down and get adventurous and courageous and look to make fresh new music that will have all the elements that we want -- which is, you want glory, you want power and you want sex, and you want curiosity and the unknown. You want all those things in your sound; you can put them in there. That’s your personality. You can put your personality into this music, but don’t turn your back on the evolution of music itself. You’re doing an injustice to your very own art, if you don’t consider the new palette, the new paints, the new ways of making music.

Especially in the last month or so, there has been so much nostalgia surrounding a lot of bands you were popular with in the early '90s, with Nirvana’s "Nevermind" and Pearl Jam's "10" turning 20. It’s interesting that you’re still very forward-thinking.

I can afford to be. Look, maybe you think I’m slightly stupid, because I don’t stop to consider what others might think of the new record. But there is calculation involved, where you’re not going too far away so that people that loved you… The people that loved Jane’s Addiction were always forward-thinking people, so I calculate and figure they’re going to receive this record with the same open-mindedness they did back in the day. We were not a metal band, and anybody who thinks we were a metal band doesn’t know Jane’s Addiction. They were definitely not one of the first people to love Jane’s Addiction. [The band] were loved by the awkward, the outsider, the person that was disjointed from his family or society. Those are the people that first loved us and accepted us.

In a weird way, it’s really no different today -- we’re taking a risk and we’re putting out a sound, our own sound. It’s what we came up with; we worked hard on it, it’s not a throwaway, we’re not just doing something without any kind of forethought. We’ve been thinking about this record and thinking about it for a year and a half. We took a lot of time to put it together, and it’s very deliberate what we’ve done. Those that were not around in the early days, I think will also be excited about the record, because it is the sound of today. They’re not getting a sound from the '80s; they’re getting a sound that is representative of their generation and of their lifetime.