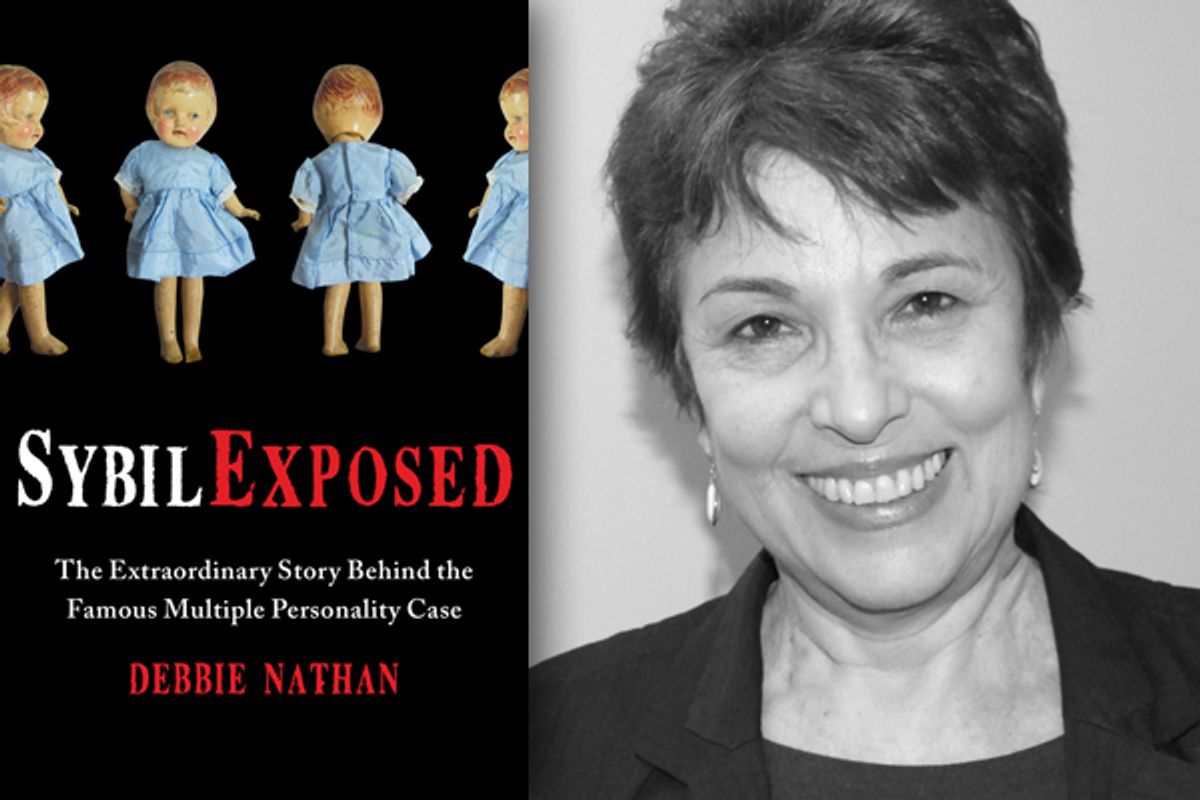 Debbie Nathan's "Sybil Exposed" is about psychiatric fads, outrageous therapeutic malpractice, thwarted ambition run amok, and several other subjects, but above all, it is a book about a book. Specifically, that book is "Sybil," purportedly the true story of a woman with 16 personalities. First published in 1973, "Sybil" remains in print after selling over 6 million copies in the U.S. alone.

A work of high Midwestern gothic trash, "Sybil" might have been purpose-built to enthrall 14-year-old girls of morbid temperament (which is probably the majority of 14-year-old girls, come to think of it). I would not be surprised to learn that it is circulated as avidly on middle-school playgrounds today as it was in my own youth. My sisters, my friends and I all devoured it, discussing its heroine's baroque sufferings in shocked whispers before promptly forgetting all about it until the TV movie starring Sally Field came along.

That should have been the end of "Sybil," another flash-in-the-pan "true life" paperback shocker that people sorta believe but mostly not -- rather like "The Amityville Horror." Instead, the book, written by journalist Flora Rheta Schreiber, became the catalyst for a psychotherapeutic movement that ruined many lives, beginning with the woman whose story it claims to tell.

Nathan, a reporter who was the first to challenge the nationwide panic over the "ritual sex abuse" of children in the 1980s, was already familiar with the damage caused by the enormous upsurge in diagnoses of multiple personality disorder linked to the same scare. In "Sybil Exposed" she has painstakingly pieced together the most comprehensive account yet of the case that did so much to promote that diagnosis -- that of Shirley Ardell Mason, the woman on whom the character Sybil was based. Mason; her psychiatrist, Dr. Cornelia Wilbur; and Schreiber were the three principals in an enterprise they called Sybil Inc., founded on a precarious yet strangely long-lived melange of fabrications, exaggerations and downright lies.

"Sybil Exposed" utilizes a cache of Schreiber's papers archived at a New York City law school, letters collected from a far-flung variety of sources, and even some interviews with (now very aged) friends and relatives of the three women. Mason grew up in a Seventh-day Adventist family in small-town Minnesota during the 1920s and '30s, a painfully thin child whose religion made her a misfit at school and whose imaginative, artistic yearnings were regarded as sinful by her church. She suffered from phobias and other neurotic complaints, but also from a constellation of physical and sensory symptoms that Nathan believes can be attributed to a lifelong and largely untreated case of pernicious anemia. Those symptoms -- tingling in the limbs, spatial disorientation and confusion among them -- were, as was often the case at the time, blamed on psychiatric problems.

Mason dreamed modestly -- of becoming an art teacher -- but Schreiber and Wilbur were strivers who got a tantalizing sampling of professional success during World War II, only to be summarily shoved aside when the men came home. Wilbur turns out to be the most fascinating character in the trio, a woman of queenly comportment clad in "Katharine Hepburn suits" who commanded a potent, quasi-maternal charisma. The waifish Mason was a goner from the moment they met, and Nathan details how her 16 "alters" emerged as part of an often desperate strategy to hold her therapist's interest and attention.

It certainly didn't help that Wilbur blithely disregarded what paltry ethical guidelines existed for her profession at that time. She provide treatment to her star client on credit, loaned her money, found her jobs, and even allowed Mason to effectively live in her own house. She treated her roommate and persuaded the woman to take notes on Mason's behavior. Doctor and patient went on road trips together, and when a dispute arose between Mason and a niece staying with Wilbur, it was the niece who got the boot. Wilber seems to have done everything to violate therapeutic boundaries short of actually sleeping with Mason, and it's no surprise to learn that, of a group of her devoted (mostly male) proteges at the University of Kentucky, half would eventually be accused of having sex with their patients.

But that's not all! While the first "alter" to present itself to Wilbur seems to have been Mason's idea (based on a role she played as a child, to amuse her mother), she was prepped to do so by reading material Wilbur pressed on her. "Sybil" was not the first popular account of real-life multiple personality offered to the public -- the book and film "The Three Faces of Eve" preceded it. But cases were exceptionally rare, less than a hundred in Western medical history before the publication of "Sybil." A patient suffering from the condition would be a feather in any therapist's cap. Wilbur at first thought Mason suffered from "fugue states," and her treatment -- a truly mind-boggling assortment of powerful drugs, electroshock therapy on an old portable machine and, eventually, hypnosis -- reduced the frail woman to an abject condition in which she became exquisitely suggestible.

Wilbur's main drug of choice, Sodium Pentothal, is sometimes called "truth serum" for its ability to suppress higher brain functions, but is in fact known to produce unreliable confessions and bizarre fantasies. It's also addictive, and Mason, who often lay for hours with the needle parked in her arm as Wilbur asked flagrantly leading questions, became hooked. She was, then, not only emotionally and financially dependent on her therapist but chemically dependent as well.

Nevertheless, Mason did at one point attempt to jump off Wilbur's train, writing her doctor a long letter confessing that all the multiple-personality stuff -- the lost time, the named "alters" and the grotesque tortures supposedly inflicted on Mason as a child by her supposedly psychotic mother -- had all been made up. Wilbur briskly dismissed this as a "major defensive maneuver" designed to derail the "hard work" of therapy lying ahead. The pitiably vulnerable Mason soon caved.

For her part, Schreiber, who was brought in by Wilbur to tell Mason's story for a general audience, applied to the job the skills of a former radio dramatist turned writer of dubious "as told to" articles. Nathan links this development in Schreiber's career to a moment when general-interest magazines, faced with the new competition of television, demanded melodramatically confessional "human interest" narratives from their freelancers. (She also documents a connection between Schreiber and Terry Morris, a "pioneer" of this genre who freely admitted to taking "considerable license with the facts that are given to me." Her son is the political strategist Dick Morris.)

Freakish as Mason's condition was, it didn't quite make for a thrilling narrative, and Schreiber became uncomfortably aware that a lot of the stories elicited from the "alters" by Wilbur -- including a ridiculous tale of a flight to Amsterdam to aid a refugee from the Nazis -- were simply impossible. Nevertheless, she plowed ahead, massaging any facts that proved insufficiently sensational, pleading the cause of "emotional truth" (the same term used by fibbing memoirist James Frey). After the book became a hit, she feuded with her two collaborators and launched a campaign to nominate herself for the Nobel Prize.

Similarly, Stewart Stern, the screenwriter hired to adapt the book, was initially skeptical of many of its claims. It took only a couple of days in Wilbur's company, however, before he got with the program. Soon, he was writing to her, "I found myself wishing more and more that I too could have been -- could be -- your patient." In the cause of "emotional truth" Stewart was obliged to insert "fiction after fiction to smooth out the parts of Flora's book that seemed poorly motivated or downright illogical." Throughout "Sybil Exposed," Nathan traces the winding path from truth to falsehood, with each participant adding more fabrications to the story as it passes through his or her hands.

Mason, like so many patients diagnosed with multiple personality disorder (now rechristened "dissociative identity disorder," in part to shake the bad rep of MPD), improved markedly under certain conditions -- namely, the absence of her therapist. For several years after her therapy concluded, she lived happily as an art teacher at a community college, even owning her own house. But the publication of "Sybil" destroyed that life; Schreiber, who had invented so much of her biography, had so thinly disguised other details that many acquaintances recognized her. Too self-conscious to endure this exposure, Mason fled back to Wilbur and lived out the rest of her life as a sort of beloved retainer, cooking her doctor breakfast and dinner every day and nursing her on her deathbed.

Wilbur, on the other hand, thrived, presiding over the explosion of MPD diagnoses as one of the foremost experts on the condition. She played a key role in promoting the belief that conspiracies of fiendish, sadistic adults were secretly perpetrating murder, child rape and mutilation, human sacrifice, and cannibalism across the country and that repressed memories of such atrocities lay at the root of most MPDs. Innocent people were convicted of these crimes on the basis of testimony elicited from highly suggestible small children and hypnotized adults. Families were sundered by therapists who convinced their patients that they'd suffered similar ordeals despite having no conscious memory of it. This opened the door to years of expensive and ineffective therapy.

Surprisingly, Nathan is not unsympathetic to Wilbur. "She wanted to help, and she did the best she knew how," she writes of the doctor, noting her tireless devotion to her patients and her particular willingness to support women who dreamed of achievement beyond the domestic sphere. But, as Nathan also points out, the care Wilbur provided frequently incapacitated her patients, leaving them even less able to fulfill themselves. MPD became a sort of illness-as-metaphor that women used to describe their conflicting desires in an age of increased opportunity. The result was to cast conflict and desire as disabilities, instead of what they are -- the very fuel of life itself.