How TV improved "The Walking Dead"

AMC's zombie series returns for season two tonight, already more powerful than the long-running comic it's based on 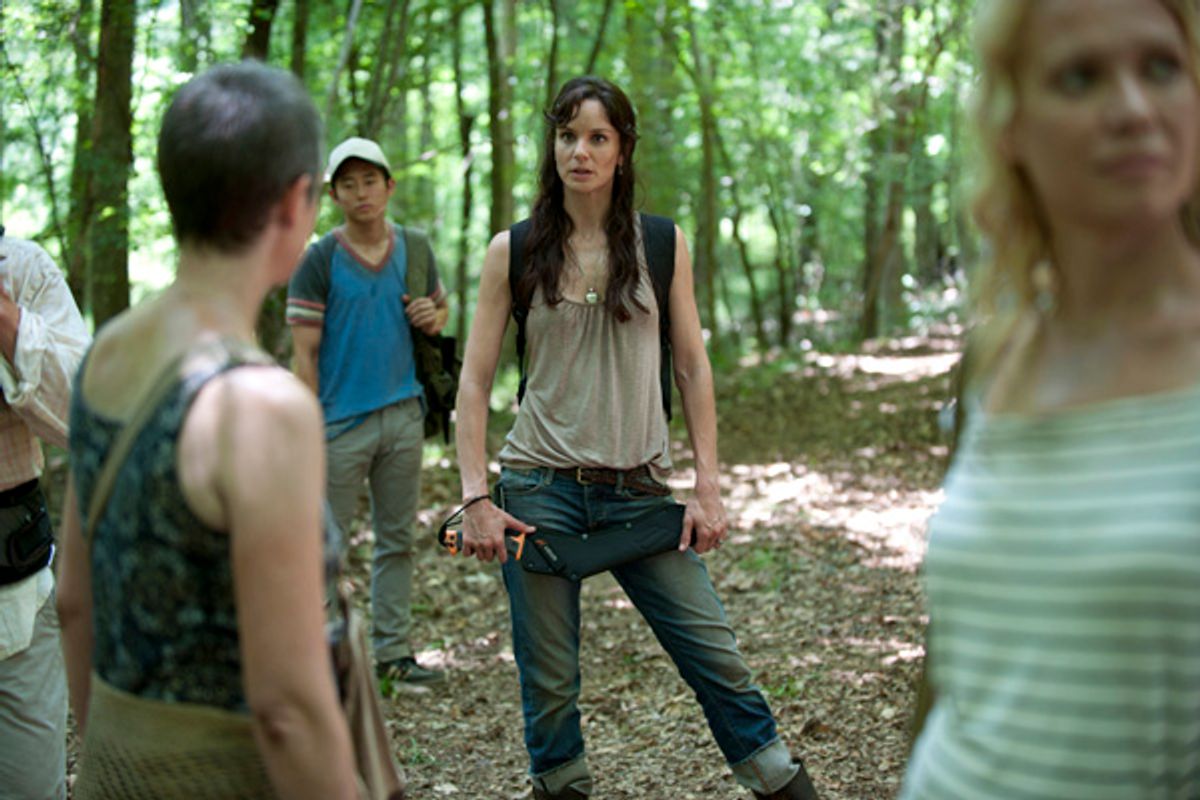 Continuity is a double-edged sword in “The Walking Dead.” According to Robert Kirkman, the writer and co-creator of the comic book that AMC’s acclaimed show is based on, the intent of his series was to follow a single character, Rick Grimes, as he survives the Zombie Apocalypse. This has made the comic a consummately ambitious experiment in long-form narrative storytelling  -- and it creates challenges for the TV version, which begins its second season tonight. Eighty-nine issues into its seemingly indomitable run, Kirkman’s comic is messy, sprawling and often poorly realized. And a big reason why is that we know that Rick can’t die. That’s the series' hook -- and its biggest problem.

This wouldn’t create such a dilemma for the show’s writers if Rick were likable. Unfortunately, he’s not. As originally conceived in Kirkman’s comics, Rick is a fundamentally desperate and needy character. He inserts himself into situations and tries to control events where he is in over his head. He sees himself romantically as a benevolent savior — and he almost always gets his way. After Rick gets his bearings in the show’s pilot, “Days Gone Bye,” he finds a horse, saddles up and rides into a zombie-infested Atlanta with a bag full of guns slung over his shoulder. He has no idea how ill-prepared he is for what awaits him in the city.

In both the comics and the TV show, Rick Grimes is a true-blue hero but, in the comics, he is also intolerably self-righteous. As sketched by Kirkman, he’s got a messiah complex, one that’s not even semi-cured until many story arcs later when he goes a little crazy, loses a hand and starts hearing voices.

But Rick’s character is one of the many things that Frank Darabont, the AMC show’s former show-runner, and Kirkman, as executive producer and a writer, have done better on screen. In AMC’s show, Rick is just a standard bearer for a central rag-tag group of survivors. He’s also much less strident than he used to be in the comics. Darabont and Kirkman have smoothed out some of the bumps in Kirkman’s original vision and delivered something closer to what the original source comic’s epic narrative could have been.

Last season, in “Days Gone Bye,” Darabont established that actions necessarily have consequences. After Rick is attacked by a horde of zombies, he falls off his horse and drops his bag of guns. Once he’s regrouped with a cluster of other survivors, he decides to retrace his steps and retrieve his bag in “Vatos,” the show’s fourth episode. Similarly, after Rick joins a group of survivors in a mall in “Guts,” episode two, they wind up abandoning one of their own and leave him to die. Admittedly, Merle Dixon (Michael Rooker), the guy that they turn their back on, is a bigot and a panicked opportunist, plain and simple. But he’s also a human being so leaving him behind matters.

To be fair, Kirkman and co-creator/original series penciller Tony Moore’s first “Walking Dead” story also managed to show that the only way to stay human in a crisis is to force oneself to consider one’s actions, both past and present. Still, the directness with which Darabont and Kirkman show us this philosophy in action within the span of six scant episodes is very refreshing. It’s great to see that AMC’s first season does not follow in the foot-steps of Kirkman and Moore’s first narrative arc by leaving viewers wondering how Rick’s group will survive after zombies attack and infect a couple of their loved ones and new friends. That happens in “Vatos,” leaving two more episodes in which the character consider what has happened and try to pick up the pieces.

Season one doesn’t even end after Rick and the group discover Edwin Jenner (Noah Emmerich), a scientist that’s struggling to find a cure to the virus, in “Wildfire.” Instead, Darabont and Kirkman wrapped up those episodes in such a way that, while they’ve left room for further travails, they’ve also given viewers a clear thematic resolution.

There are a number of reasons why season one of “The Walking Dead” is more satisfying then Kirkman and Moore’s first story arc, chief among them being how Darabont and Kirkman’s relative directness is a result of the series being adapted from comics to TV. Darabont and his writers had less wiggle-room to work with than Kirkman and Moore did. They had to put all of their cards on the table in six episodes.

Darabont and Kirkman’s need to immediately show and not tell what they had planned for their characters didn’t however make “The Walking Dead’s” first season an across-the-board success. The events of season one are sped-up to a ridiculous, quasi-Benny Hill-level pace, making it necessary for the show’s writers to frequently rely on short-hand storytelling techniques to get the job done. Power dynamics needed to be set up quickly and simply, leaving a lot of room for improvement when it comes to dialogue. In “Guts,” Darabont establishes the macho archetype that he tries to move Rick away from by having Glenn (Steven Yeun), one of the show’s main protagonists, explicitly spell them out. “Nice moves there, Clint Eastwood,” Glenn sarcastically spits out at Rick. “You the new Sheriff? Come riding in, to clean up the town?” Of course, Rick isn’t, but he very well could be. And that’s the problem as we’re meant to simplistically understand it.

Then again, season one is as successful as it is because it delivers a clearly delineated start and finish to the existential melancholy that initially afflicts Rick in “Days Gone Bye” and then subsequently is shown to affect the rest of his group in later episodes. Darabont began the series with scenes of Rick wordlessly exploring a post-civilized world. Bodies are heaped around the hospital Rick wakes up from a coma in and zombies are now everywhere. The sight of a woman with half her face missing, her guts trailing out from behind her and her left leg reduced to a stump makes our stalwart hero realize that he’s facing something indomitably inhuman, something that will inevitably force him to throw up his hands and wonder what the point of going on is.

Rick and his group reach emotional rock bottom in “TS-19,” and they do so with a necessary amount of speed. By this point, the abnormally brisk pace of the rest of the series makes sense. When the group meets Jenner, they suddenly realize just how despondent they’ve become since the world as they knew it ended. Jenner, a man that seems to have everything except the things that he really wants, shows the survivors that they’re all emotionally drained and basically unhappy. Some of them even want to kill themselves just so they don’t have to go through the motions of looking for a sign of hope that they’re convinced doesn’t really exist.

Now, after the events of “TS-19,” Rick and the remaining survivors know that they want to live. They have a newfound sense of resolve, one that the teaser for season two promises will be almost immediately broken. A wordless scene of a now-feral Rick stalking and bashing in the skull of a zombie promises that the fragile sense of peace that he and his crew have found at the end of season one will be dispelled almost immediately.

Still, season two promises to excite if it will probably only cursorily follow the plot of the comics’ second story arc. The TV series seems to be miles ahead of where the comics left off at the end of its first six installments. One wonders whether or not the show’s current developers will have the group discover Wiltshire Estates, a gated community, and later a farm where zombies are kept locked in a protective survivor’s basement. The TV show’s protagonists already know that they need to live with a lot of grief and make tough decisions, especially the necessity of either abandoning newly infected loved ones or shooting them once they’ve been turned into zombies. In that sense, the frantic pace of season one has really paid off. Because even after seven years of Kirkman’s comics, it’s pretty hard to know what will come next in this new and significantly improved "Walking Dead."