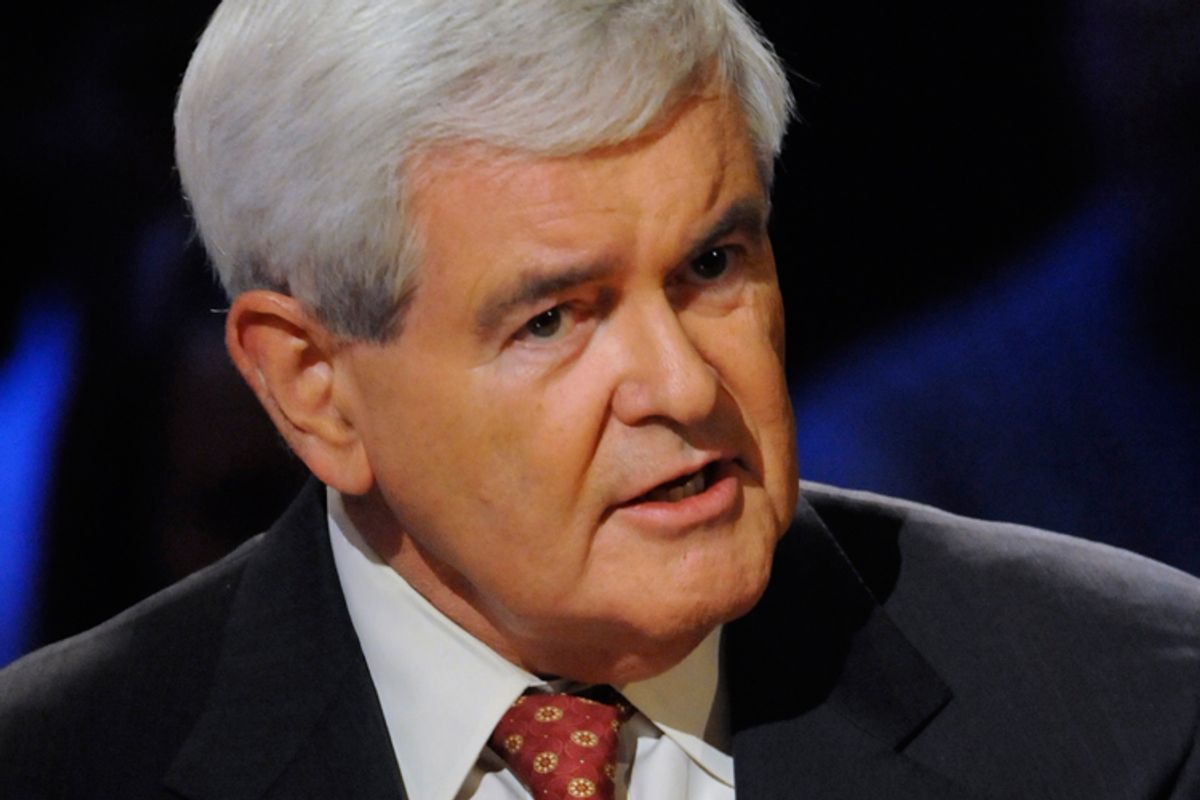 Newt Gingrich wants to politicize your prostate. Sound gross? It is.

Asked at last week's Republican presidential candidates' debate about the massive amounts of Medicare money spent on patients in the last two years of life, the former House speaker chose to focus his remarks on prostate cancer, a matter of no small  concern to the 44 million men in America who are age 50 and older – a key voting demographic.

Gingrich said he had recently communicated with Andy von Eschenbach, former  head of the National Cancer Institute and provost at MD Anderson, the largest cancer treatment center in the world.

And he wrote me to point out that the most recent U.S. government intervention on whether or not to have prostate testing is basically going to kill people. So, if you ask me, do I want some Washington bureaucrat to create a class action decision which affects every American’s last two years of life? Not ever.

Gingrich said he disagreed with recently announced draft recommendations from the U.S. Preventive Services Task Force regarding the merits of protein-specific antigen screening tests for prostate cancer. He also disparaged the task force with false and misleading language that does no service to the health of the men whose votes he seeks.

Since the mid-1980s, PSA-based screening has been promoted as the best way to detect prostate cancer in its early stages, before symptoms arise. Theoretically, the screening would lead to more effective treatments for this cancer, the most commonly diagnosed form of non-skin cancer in U.S. men.  But the task force, in a move that has been well documented in recent media, announced earlier this month that healthy men should no longer receive PSA blood testing.

Gingrich not only disagrees with the 16 public health professionals who agreed on the recommendation. He likens the very existence of the task force to the so-called death panels that Alaska Gov. Sarah Palin saw lurking in the Obama administration's health reform plan. The panels actually gave voluntary recommendations to doctors about end-of-life care. Gingrich's outburst was a reminder of how reckless, over-the-top rhetoric has become fashionable among politicians opining on matters of bioethics.

Gingrich's remarks seemed calculated to mislead people into thinking the U.S. Preventive Services Task Force is a wonky group of federal bean counters far removed from the realities of medical practice who are issuing dangerous orders. Fostering the false impression that this panel does not include medical specialists and that it operates pursuant to some economically oriented rationing agenda is a cheap shot. It is aimed at discrediting the task force and undermining its legitimacy in policymaking discussion while boosting Gingrich's single-digit polls numbers

As Glenn Kessler’s fact-checking showed, the task force is actually composed of 16  independent experts in primary and public health.  Formed in 1984, the task force conducts impartial assessments of the scientific evidence underlying clinical preventive services, including screening, counseling and preventive medications.  These physicians are charged with evaluating benefits and burdens of preventive medical services, particularly cancer screening tests. They make recommendations about which services should be incorporated routinely into primary medical care. They do not issue orders.

The language of the recommendation against PSA-based screening as it applies to U.S. men is specific: Men who do not have symptoms that are “highly suspicious” for prostate cancer should not be tested. After a review of all available evidence, the task force concluded the benefits of PSA screening are outweighed by the harms.

This panel of experts – insulated from special interest advocacy organizations, as well as economic and political concerns related to financing – concluded that widespread testing of a healthy men’s blood for prostate-specific antigen does not save lives. The PSA screen leads to both false positives and “overdiagnosis” of extremely slow-growing prostate tumors. This diagnosis often prompts men to pursue unnecessary surgery and other interventions in a very delicate area of the male anatomy.

Men who are informed of a positive PSA screen for prostate cancer, but who elect to do nothing, live – usually until their mid-70s or beyond – with the negative psychological burden of believing they have a cancer diagnosis they either do not in fact have (false positive) or they do have a slow-growing cancer that will most likely not be their ultimate cause of death (overdiagnosis).  As a New York Times Magazine story noted recently, “far more men will die with prostate cancer than from it, and only a tiny fraction of prostate cancers ever cause symptoms, much less death.”

At tomorrow night's debate in Las Vegas, Gingrich should be asked a follow-up question: whether he would like to address the task force’s summary of the evidence regarding the harms related to treatment of PSA-screen-detected prostate cancer.  Here is the specific language from the draft recommendation:

Adequate evidence shows that nearly 90 percent of men with PSA-detected prostate cancer undergo early treatment with surgery, radiation, or androgen deprivation therapy.  Adequate evidence also shows that up to 5 in 1,000 men will die within 1 month of prostate cancer surgery and between 10 and 70 men will have serious complications but survive.  Radiotheraphy and surgery result in adverse effects, including urinary incontinence and erectile dysfunction in at least 200 to 300 of 1,000 men treated with these therapies.

Of course, this parade of horrible possibilities must be balanced against the potential for early detection and successful life-prolonging, cancer-fighting interventions.  Anecdotally, such success stories are out there. In fact, the American Urological Association continues to recommend that PSA screening should be offered to men aged 40 years or older.

Men and their doctors need to decide for themselves. But the task force’s review of all the published, peer-reviewed evidence, including two large studies in Europe and the United States, found  “no statistically significant reduction in prostate cancer deaths” can be attributed to PSA screening.

It turns out that the vast majority of men (as many as 90 percent) currently treated with surgery or radiotherapy for PSA-detected prostate cancer in the U.S. do not in fact have prostate cancer death prevented or lives extended from their treatment. Yet 90 percent of them are subjected to the significant harms cited by the task force.

Larry Churchill, professor at the Center for Biomedical Ethics and Society at Vanderbilt University, noted that the task force’s findings were not terribly surprising, given the structure of our healthcare system.

“Any society which pays its physicians by the procedure, with larger financial rewards for more invasive procedures,” Churchill said, “should expect an epidemic of over-diagnosis and over-treatment, some of it dangerous.”

The task force recommendations, he said, "provide an important warning to both physicians and patients that there is no evidence to support routine PSA testing," As for Gingrich, Churchill had a provocative question.

“If he is for a blind proliferation of PSA testing while ignoring the science, are we to conclude that he supports more incontinence and impotence. Or that he is simply pandering for votes?"

Joshua E. Perry, JD, MTS, is a life sciences research fellow and an assistant professor of business law and ethics at Indiana University's Kelley School of Business. His work explores legal, ethical and policy issues in the business of medicine, bioethics and healthcare.

Joshua E. Perry, JD, MTS, is a life sciences research fellow and an assistant professor of business law and ethics at Indiana University's Kelley School of Business. His work explores legal, ethical and policy issues in the business of medicine, bioethics, and healthcare.