At least a half-dozen separate protest movements have sprung up between L.A. and San Diego 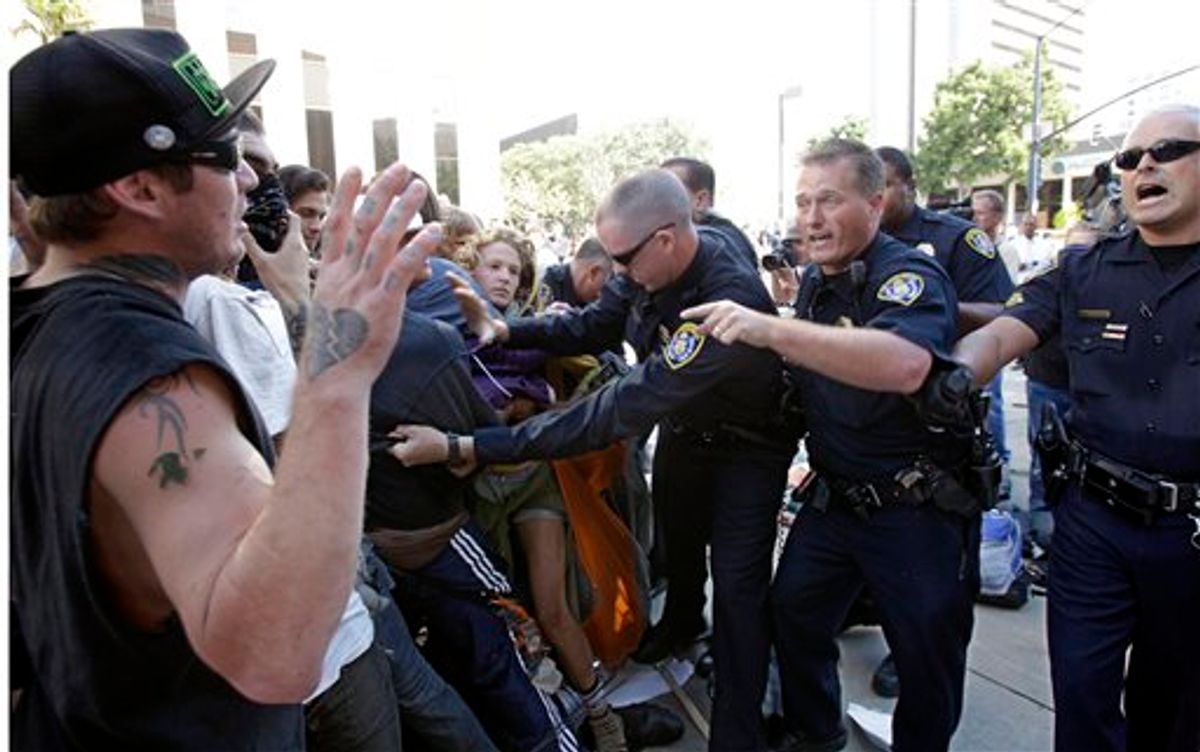 California has long been a hotbed of political activism, so it's no real surprise that residents across the state are expressing their solidarity with the Occupy Wall Street movement. In fact, in the relatively small tract of land between Los Angeles and San Diego, a number of groups have staged protests of their own. Here's a roundup:

Occupy Los Angeles: A group of 10,000 to 15,000 protesters -- not just Angelenos, but Californians from near and far -- marched in dowtown L.A. on Saturday. According to the Los Angeles Times:

Despite the frustration and anger that many protesters expressed, the march took on a decidedly festive atmosphere. Families walked together, with mothers carrying babes in Snuggies and tattooed fathers toting toddlers on their shoulders. One woman twirled a Hula-Hoop around her middle as she walked. A man strummed a guitar. Several people pounded drums.

Occupy Long Beach: Though only a few dozen protesters reportedly came out for a Sunday protest, a few ran into trouble when they set up camp in the city's Lincoln Park. From the Los Angeles Times:

Police said that the 35 to 40 demonstrators in Long Beach's downtown Lincoln Park were peaceful Sunday and that most of them followed an order to move to the sidewalk when the park closed.

But as police searched tents in the park, they found a few had stayed behind. Those arrested and cited were among those who refused to leave, police said.

Occupy Orange County: A bastion of conservatism in a solidly blue state, Orange County hasn't swung for a Democratic presidential candidate in decades. That doesn't, however, mean that there isn't some genuine frustration with the establishment. A group calling itself Occupy Orange County assembled in Irvine, Calif., on Saturday in solidarity with OWS, drawing a crowed of 1,000-plus demonstrators. Similar protests have popped up in Anaheim and Orange, with another planned for Santa Ana this upcoming Saturday, according to the Orange County Register:

Occupy Riverside: A group of some 200-to-300 protesters assembled at Riverside's downtown mall area over the weekend. City officials have granted permits to camp out nearby, but also set a number of restrictions for conduct at the mall, which the city has reportedly spent "millions of dollars" renovating recently.

Demonstrators waved signs with slogans such as “Banks got bailed out; We got sold out” and the now-familiar “We are the 99 percent,” and cheered when passing cars honked in support.

Occupy San Diego: The refusal of protesters to remove their tents near City Hall resulted in arrests and pepper-spraying on Friday. Since then, the atmosphere among the dozens of remaining at Occupy San Diego has been substantially more low-key.

Demonstrators...adjusted to the mandate by police late last week prohibiting all but one tent in the Civic Center Plaza, a stark contrast to the movement’s tent city that formed during the first week of the protest.

Protest signs continued to dot the downtown plaza with messages such as “Separation of Corporation and State” and “End the Fed."