A record number of people are living in poverty. Meanwhile, politicians bemoan the fate of the "persecuted" wealthy 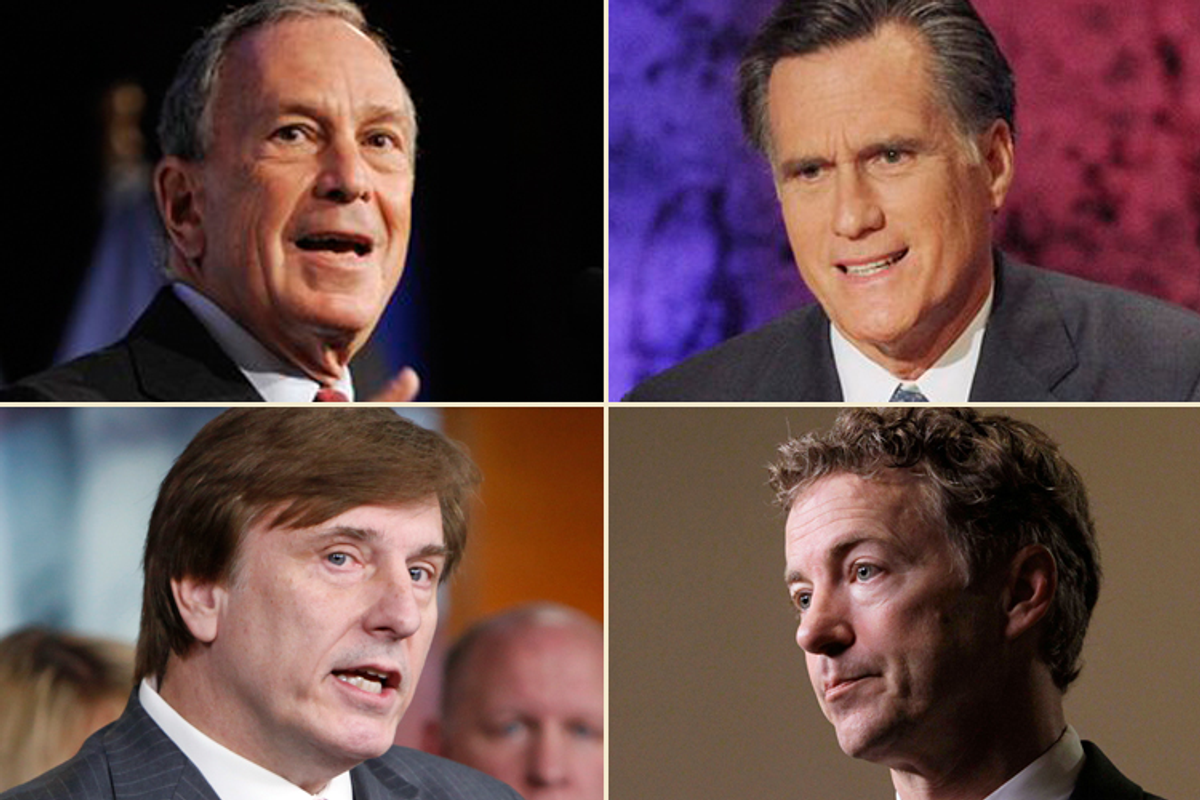 The housing market has bottomed out faster than at any time since the Great Depression. The job market is so weak that one third of the unemployed have now been without work for more than a year, making unemployment "a semi-permanent condition," according to the Associated Press. A record number of Americans are now living below the poverty line -- including one out of every five children.

We've reached the economic end times, and we're now seeing the deep fissures of our society laid bare. On one side, throngs of protesters have hit the street demanding justice for the 99 percenters -- otherwise known as The Rest of Us. On the other side, the top 1 percent are complaining about "only" clearing $400,000 a year, and about throngs of poor people getting between them and their steak dinners.

In a sense, Ann Coulter is right -- there's a French Revolution quality to it all. Not from the poor but from the ultra-wealthy, who see the upheaval and are now screaming their ancient battle cry even louder: "Let them eat cake!"

With that preface, we present to you the autumn edition of our ongoing beat coverage of the "Let Them Eat Cake" movement.

Discriminating Against Unemployed People is Your Corporate Right!

For all the enduring mythology about laziness being the cause of unemployment, this recession has seen the biggest ratio of job applicants to job openings on record. When massive crowds of jobless citizens appear when even a few of the lowest-paid jobs open up, it's pretty clear that it's not lack of work ethic that's causing unemployment -- it's a lack of jobs, coupled with discrimination against those who are currently out of work. This latter problem is so acute, that President Obama and some states have proposed bills to ban the practice.

Yet, Rep. Louie Gohmert, R-Texas, is leading the congressional Republican effort to stop the federal proposal. In a House floor speech, he decried creating "a new protected class" of Americans, and forcefully defending the right of corporate executives to punish people for the crime of being out of work in the worst recession since the Great Depression.

If you are unemployed in this crushing recession, if you've filed job applications to no avail, if you can't even get a call back from an employer's HR department, never fear: as long as you've got $5.2 million, you've got a great shot at finding a decent-paying job.

In a story that cheerily underscores just how powerful elite privilege is in our stratified economy, the Guardian reports that in what was likely "the most expensive job application ever," hedge funder Ted Weschler "paid $5.2 million to win two charity auctions to have dinner with investment guru Warren Buffet [and] now Buffett has offered him a job."

While Weschler's job application cash did go to a San Francisco homeless shelter, the spectacle once again reminds us that for all the talk of meritocracy, aristocrats prefer fellow aristocrats more than ever. Indeed, you may think your resume counts for something, you may think a good interview will clinch the job for you, but think again. All the warm-and-fuzzy stories about Weschler's ascent want you to know that all that "merit" stuff doesn't matter.

Equity Means Everyone Else Must Sacrifice

In a classic piece of bait-and-switch, billionaire hedge funder Steven Schwarzman (the guy who threw himself a $5 million birthday bash) published a Financial Times editorial in September seeming to move away from the Let Them Eat crowd. Calling his dispatch an "olive branch" to President Obama, Schwarzman insisted that he's ready to "share the pain" of fixing America, and says that "most Americans will be willing to sacrifice for economic stability and a bright future for our children, if the [fix] falls equitably on all shoulders."

What stands out is not the nebulous promise that Schwarzman is open to some form of sacrifice, but the naked attempt to perpetuate a key narrative of Let Them Eat Cake-ism -- what I've called the Myth of the Persecuted Billionaire.

First, there's the "olive branch" framing -- yet another attempt to suggest that President Obama has been waging a vicious war on billionaires like Steve Schwarzman. Naturally, we're asked to forget that Obama is the man who played a key role passing the Wall Street bailouts, extending the Bush tax cuts for the super-rich, opposing serious caps on executive pay and watering down the financial reform bill -- all while stocking his administration with Steve Schwarzman clones.

By using notions like "equity" to justify service cuts and tax increases that will hit the middle class the hardest, Schwarzman wants us to ignore the fact that in the recession, the financial sector is the one corner of the economy that is being permitted to avoid sacrifice entirely. Indeed, a glance at this one stunning image recently released by Reuters shows that the Schwarzmans have experienced the diametric opposite of sacrifice -- they've been rewarded and pampered while the rest of us suffer.

In opposing President Obama's proposal to force millionaires to at least pay the same tax rate as middle income Americans, Rep. John Fleming, R-La., took to national television to make a MSNBC appearance to imply that the $6 million in annual revenue his small business represents a form of poverty, because after business expenses and taxes, "by the time I feed my family, I have maybe $400,000 left over.” This allegedly meager sum, of course, is on top of his $174,000-a-year taxpayer-funded government salary.

When MSNBC's Chris Jansing asked Fleming why the average person out there making "40, 50, $60,000 a year" should see his situation as a "sympathetic position," Fleming then accused her of "class warfare."

Who Cares about Record Income Inequality?

"Who cares?" is another phrase that encapsulates the "Let Them Eat Cake" sentiment -- rich people simply don't, and shouldn't, care about the plight of others. So we owe wealthy Fox News pundit Brit Hume a thank-you for his sheer honesty.

During an O'Reilly Factor discussion about income inequality hitting record levels in America, Hume accused Democrats of being "obsessed" with economic fairness, and then declared that "If inequality is at a very much higher level, who cares?"

After a lucrative Gordon Gekko-like career raiding businesses and throwing huge numbers of Americans out of their jobs, Mitt Romney is worth about $250 million. He's so filthy rich, in fact, that Vanity Fair listed all the things that could fit into his new $12 million La Jolla mansion, including the world's largest whale and the Memphis-area Enterprise Rent-A-Car facility.

And yet, in talking about taxes, Romney argued that America needs a tax code that is "for the great middle class -- the 80 to 90 percent of us in this country." Yes, that's right. "Us" -- because doesn't every average American have a quarter billion dollars to their name?

In making his case to slash low-income social-safety-net programs, Sen. Rand Paul, R-Ky., told a Senate hearing that the initiatives are "creating unnecessary and unhealthy dependence on government." Like a good Let Them Eat Caker, Paul ignored the comparatively small size of those programs next to things like the Wall Street bailout. But that's not all -- Paul then went on to state that while "the rich are getting richer" the "poor are getting richer even faster."

As ThinkProgress notes, Paul's allegation is factually inaccurate: "Currently, income inequality in the United States is greater than that of Pakistan and Ethiopia and higher than at any other time since the Great Depression," the website noted. "Indeed, thanks to exceedingly low tax rates, the rich are getting richer, with the richest one percent earning nearly 25 percent of the total income in the country. Meanwhile, nearly one in three middle-class Americans is slipping down the income ladder as an adult."

Chicago is an important historical location for America's Let Them Eat Cake movement. It is the site of CNBC's Rick Santelli's famous televised rant during which he stood on the floor of the Mercantile Exchange surrounded by wealthy traders and proceeded to berate struggling homeowners as "losers." That jeremiad, with its dripping contempt for average Americans, is now credited with launching the billionaire-financed Tea Party.

So it's no surprise that as the Occupy Wall Street protests intensify, the Chicago plutocracy is proudly fighting back from the headquarters of the Windy City's financial sector. In the face of the protesters calling themselves the 99 percent, traders at the Chicago Board of Trade have posted a big sign on the building bragging that "We are the 1 Percent."

Protesters "were Between Me and a Steak Dinner"

As Fox News kicked off a typical segment denigrating the Occupy Wall Street movement, Steve Doocy delivered a particularly memorable line about the protesters he saw while driving around Boston. Rather than considering their agenda or grievances, Doocy whined that the droves of unemployed and poor were getting "between me and a steak dinner."

Wall Streeters are Being Persecuted

Between weekends in Bermuda, and fresh off having his "baronial" tastes profiled in the New York Times, the Big Apple's billionaire Mayor Michael Bloomberg took time out to lament the plight of bank executives in the face of Occupy Wall Street's protests against corporate greed.

“The protesters are protesting against people who make $40 or $50,000 a year and are struggling to make ends meet,” Bloomberg said with a straight face. “That’s the bottom line. Those are the people that work on Wall Street and in the finance sector.”

Bloomberg's objective was obvious: to portray Wall Streeters -- the richest and most powerful people on the planet -- as victims. But as the Wall Street Journal pointed out, his talking points were a bit, um, off:

In 2010, the average cash bonus in New York City’s securities industry was $128,530 per person, according to the state comptroller’s office. That figure doesn’t include salaries, pay tied to stock options and some kinds of deferred compensation. At the Envy of Wall Street, Goldman Sachs, the firm in the second quarter set aside $90,140 per employee for compensation and benefits.