When we'll know if Herman Cain's a contender 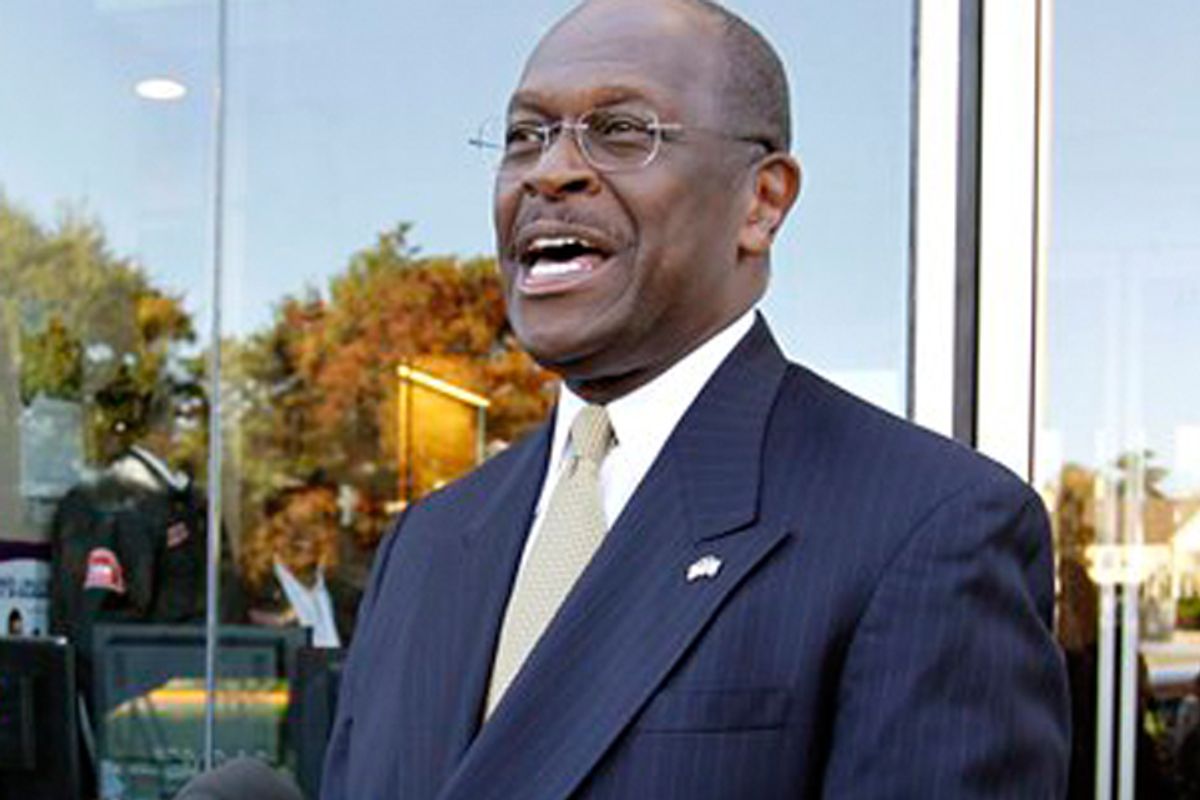 Sunday's "Meet the Press" ended up showcasing of the clashing realities of Herman Cain's sudden rise to national relevance.

On the plus side for Cain, his first place status in recent polls earned him an invitation to appear as the show's featured guest.  And while some of the post-interview commentary has focused (unfairly, I think) on his statement that "I'm not familiar with the neoconservative movement," the reviews from conservative voices have been more friendly. On the whole, Cain probably fared better in the MTP spotlight better than some predicted, and also better than some other candidates have.

But, perhaps unwittingly, a segment later in the show ended up underscoring one of the major problems Cain faces. It was a surrogate debate featuring Tim Pawlenty, a Mitt Romney supporter, and Bobby Jindal, a backer of Rick Perry. That Cain was not represented didn't really matter in this particular case, since he'd been on the program himself. But let's say MTP had wanted to include a Cain surrogate: Who would they have turned to?

Right now, there really aren't any options. As best I can tell, the most prominent conservative voice to endorse Cain is ... Dennis Miller. Unlike Romney and Perry, Cain just doesn't have any elected officials and party leaders who are widely known and generally respected by the GOP base making his case.

This is significant for two reasons. The first is the top-down nature of mass opinion. The rank-and-file voters who cast their ballots in primaries tend to take their cues from "elite" opinion-shapers in the party. Cain has made a terrific impression on Republican voters, but now that he's in first place, he's facing a brand new level of scrutiny and criticism, even from his fellow Republicans. For Cain to withstand the attacks and maintain (or grow) his support, he needs trusted conservative voices vouching for him and echoing his talking points.

The other reason involves money. Cain raised under $3 million during the quarter that ended a few weeks ago and reported having $1.3 million on hand -- a fraction of the totals for Perry and Romney. He says his fund-raising has picked up dramatically in the past several weeks, something that wouldn't be surprising given his polling leap, but attracting support from influential Republicans and their donor networks is probably Cain's best path to financial competitiveness.

The good news for Cain is that an unusually large number of big-name Republicans are still on the sidelines. And Perry's vanishing act may give him an opening to reel in some prominent conservatives, especially if Romney continues to have trouble expanding his support beyond the 25 percent range. What Cain could really use is a truly elite-tier endorsement, one that might prompt lesser-known but still prominent conservative leaders to climb on board. Right now, Rush Limbaugh seems interested in Cain, but has also expressed reservations. Haley Barbour caused a stir last week when he said that several of his family members were leaning toward Cain, but that's a long way from an endorsement. As Ed Kilgore notes, Jim DeMint, the South Carolina senator an Tea Party icon, would be a huge get for Cain. (Roll Call reported Monday morning that DeMint was likely to back Romney, whom he supported in 2008, but DeMint's camp has been pushing back against that report furiously.)

But until and unless he can nab one of the right's Big Kahunas, Cain will have to settle for what he can get. For now, that means an endorsement from the recently deposed chairman of the New Hampshire Republican Party and a potential endorsement from a backbench Georgia congressman.