How could Kim Gordon and Thurston Moore divorce?

The Sonic Youth stars showed a generation how to grow up and stay cool. So we believed they had to be perfect 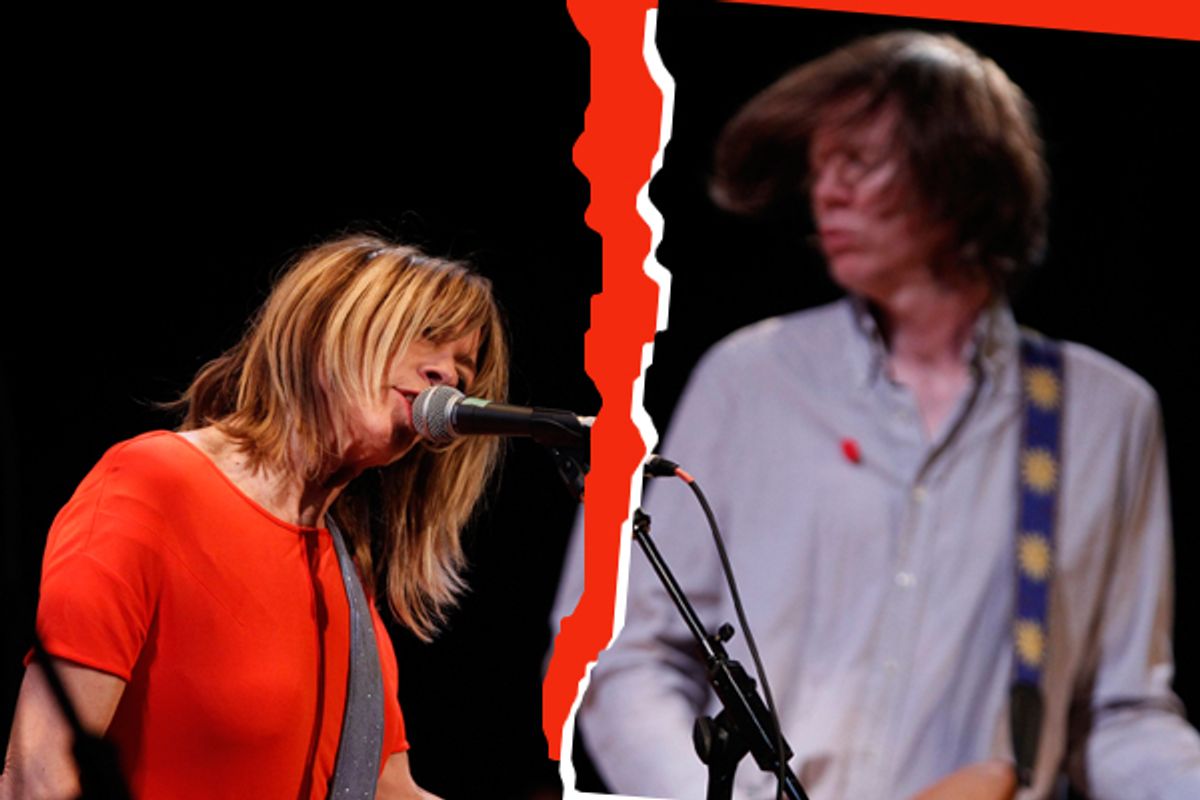 I didn’t react well to the news that Kim Gordon and Thurston Moore, king and queen of the indie-rock scene, were getting divorced after 27 years of marriage. How could New York’s “underground power couple” call it quits? As if they were mere mortals?

It came up on my Twitter feed Friday, which made the news seem all the worse -- a bit of factual flotsam on my phone. It wasn’t some cocktail party rumor. I felt sick and off-balance, searching for confirmation, vision blurred with tears. I thought, I feel like I’m reading an obituary.

“Are you fucking kidding me?!” I texted my husband.

“Yeah, it’s really sad,” he wrote back, without nearly enough emotion for someone who always wore this ecstatic expression during the infinite groove on “Expressway to Yr Skull.”

"No,” I snapped, feeling oddly protective of their privacy, “and I don't want to know. That's their business.”

I don’t know them. I’m not now, nor have I ever been, friends with Kim and Thurston. We lived on the same Lower East Side block for a while, and for the last 25 years I’ve seen them around town and at shows, either their own or in the audience for everyone from Sebadoh to Shonen Knife. Most recently, our teenage daughters’ bands shared a bill with their daughter, Coco, and we had the shared experience of proud parents appreciating the joy of their kids expressing themselves onstage.

I feel like I can call them Kim and Thurston because they never felt like celebrities to me; they were just the down-to-earth, keeping-it-real, DIY rock stars that lived next door. More than that, for the majority of my adult life, they’ve inspired me through their music and art, and yes, through their marriage and parenting.

The first time I saw Sonic Youth was in 1987 at CBGBs, at a benefit for a record store that had flooded. I was with my then-boyfriend, later husband, Rob Spillman. I remember hearing “Hot Wire My Heart” and thinking that should be our song. The evening ended with a cacophonous cover of “I Wanna Be Your Dog.” The last time I saw them was in 2009 at McCarren Pool in Brooklyn with my then 14-year-old daughter, jumping up and down as we sang along to “Schizophrenia.”

When my husband proposed to me at 22, the idea of getting married seemed a bit absurd, but also the most rebellious thing I could think of -- I mean, only squares got married. Look, we’d say to each other, Kim and Thurston are married, as though that gave us permission. They made monogamy, the whole til-death-do-us-part seem rad. Being married didn’t mean losing some part of yourself, it meant making each other stronger.

Onstage and off, neither seemed dominant; they were equal. They didn’t cling to each other in public, they gave each other space — still, in a crowd, you’d pick them out as a couple. They fit, in a way some couples, even after years of marriage, simply don’t seem to.

There they were up on stage, attacking their guitars with screwdrivers, shredding, nursing howling feedback, singing solo and together, their voices perfectly tuned to each other’s. Look at them, I thought: They were in love and married and making art. They were cool and hardcore, with a profound seriousness about their art, and they hadn’t sold out or gotten soft. In an age of irony, where I’d feign indifference and cover up my insecurity with mockery, they weren’t too cool to care.

Years later, freaking out over the fact that we were even thinking of having a child, Kim and Thurston showed us the way. Seeing Kim and Thurston with Coco, walking past the Dean & Deluca downtown, made being a parent seem not only possible, but infinitely hip. By the time I got pregnant, they’d made two more records. Indeed, half of Sonic Youth’s music (and scores of side projects) were produced after their daughter was born, proving you could be “alternative” as well as “traditional” and successful.

Kim was a mom — she loved her daughter, loved being a mother, and she was still writing and performing. She was also completely ripped. It made me think that motherhood had made her even more of a badass. So, why not me?

Sure, some of the sadness I feel over Kim and Thurston splitting is tied to nostalgia, a remembrance of a long gone past. I’ve become one of those tedious boors lamenting the death of downtown New York. Kim’s Video, King Tut’s Wa Wa Hut, holding my breath as I pass CBGBs, a sacred place defiled. I miss the days of the Tompkins Square riots and squatters and boomboxes. I’d rather hear the sibilant lowing of “Smoke? Smoke?” than a toddler wailing on the playground, and yes, I’m crying over spilt organic milk.

I tell myself, for Christ’s sake, they left the Lower East Side ages ago, left New York City, decamping to Northampton, Mass. — and made the denizens of that groovy town feel even more smug about their own decisions to flee New York City. (They just claimed Frank Black.) In all honesty, their move did -- briefly -- set me wondering if we were crazy not to at least consider ditching our cramped Brooklyn digs for hipper pastures.

And if there’s some nostalgia, there’s lots of projecting. No one can really know what goes on inside another couple’s marriage. Sure, from the outside — the great musical successes, arty side projects, the house featured in shelter magazines, the "It girl" daughter -- they looked like the epitome of domestic bliss.

But who knows? At some point, I’ll want to know what happened. Just not now. I don’t want to hear about infidelity, some clichéd open marriage bullshit (that always goes badly) or the old-as-dirt tale of trading in the old wife for the new model. I don’t want to hear about addiction, or cruelty, or gambling debts. Instead, I’m left to project my own shit and fears. Who knows, though, what it was like sitting at the kitchen table on a Sunday morning when they were out of coffee. What it was like to balance careers that each required traveling, negotiating time-zone differences, weeks spent apart.  Who knows what compromises were made, and what sacrifices. Who knows what personal disappointments and resentments they endured. Coco will soon be of college age. It’s not uncommon for parents today to consider renegotiating their marriage contract once the children are out of the house. Maybe they just fell out of love, maybe by inches, the way uneven proportions of sand and water can become concrete.

Why should they be different than the rest of us?

And therein lies my problem letting them go. What’s scarier than a couple deciding -- after 30 years of being in a band they created, 27 years of marriage, 17 years spent raising a child – that now they’re done with it? As they succeeded, we succeeded. Now the world just got a little less cool.

Last night, I went through some of our old records (how the hell will Kim and Thurston divide their albums?). I played “Evol,” “Daydream Nation” — a desert island record -- and “Confusion is Sex/Kill Your Idols.” Kill Your Idols. It was time to trust that I can go on. Well, that or put on a Yo La Tengo album...