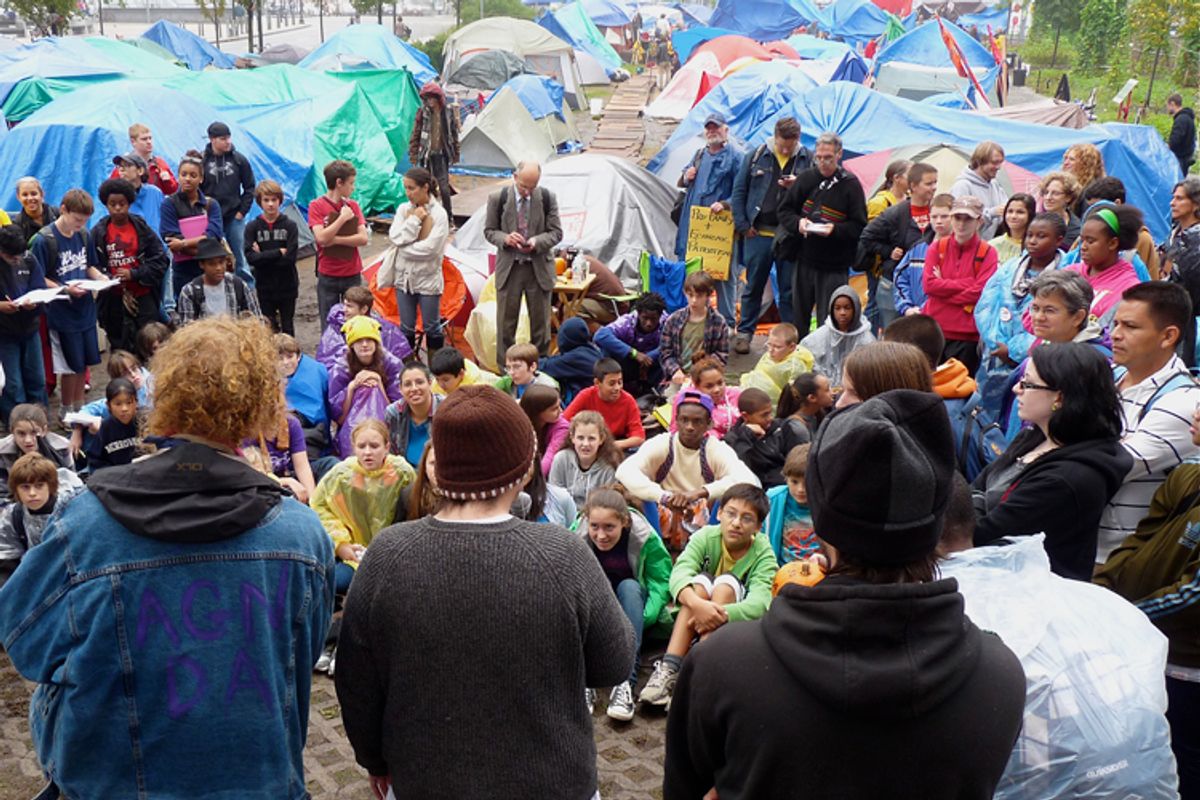 Some 60 Boston-area students swarmed into Dewey Square Friday morning, a gang of middle-school kids decked in slickers and Wellingtons for the first official field trip of the Boston occupation.  The five dozen kids from the King Open School, an alternative public magnet school, trooped through the big Boston muddy as part of their curriculum studying the U.S. Constitution.

Some were merely along for the ride, but in the faces of many children you could spot activist boys and girls sprouting right there in shadows of Boston’s financial district — baby-faced bohos being schooled in the ways of occupation, nonviolent resistance and direct action in this small tent city between the glowering blackness of the Bank of America building on one side of Dewey Square and the towering Federal Reserve Bank of Boston skyscraper on the other.

A pudgy, bespectacled occupier in a brown woolly cap asked the kids: “So, how often do you get the chance not only to watch history blossom, but also to come together to participate in building a better world?”

“Never,” blinked one boy in blue. “This is pretty much it.”

Another boy said his grandparents were involved in the civil rights movement of the 1960s. “They said our system was broken then.”

“It’s broken now too,” allowed the young man in the woolly cap.

By noon the middle-schoolers were well under the thrall of the cooler, older occupiers, engaging in some fairly adult discussions involving interesting big new words like "kleptocracy."

When asked for a show of hands, most kids had at least one parent or guardian hit in some way by the Great Recession, as the massive theft of lost wages, savings, retirement benefits and homes is politely described. One kid said his dad had to file for bankruptcy because he couldn’t afford to pay his medical bills.

Just as the social studies class gave way to science class, so the talk turned to a more down-to-earth discussion of ways to promote a green economy. “A windmill in every yard," said one. “And a solar panel on every roof,” said another.

A boy in a yellow rain slicker muttered something about turning abandoned buildings into housing for the poor. An agitator in a red sweater asked the occupiers why we involve ourselves in foreign conflicts. The leader replied, “It’s sick, but mostly we went to war to find jobs with healthcare. People should not have to kill, or be killed, to find a job with healthcare.”

The sudden presence of 12- and 13-year-olds lightened the mood of the occupiers. The rain had stopped and half of the 300 people at the Dewey encampment had lit out for New York the night before to stand with their counterparts for a clash with the NYPD that was narrowly averted.  The kids brought a sense of relief.

And their singular message for the kids: You may not have a job if and when you graduate from high school or college, but you will always have an occupation:  "You guys are the next generation of social media activists and we’re passing this all down to you sooner than you think," one occupier warned.

The kids wiggled fingers excitedly, the occupation movement's signal  gesture used to register and gauge reactions nonverbally.  Palms outward and four wiggly fingers up means a big yes; palms inward and four wiggly fingers down means a big no. The kids were not taught the practice (known in non-hierarchical conflict-resolution jargon as the twinkles), they just picked it up the way kids pick up most things, by imitating the older folk, by living and learning.

"Hi, I'm Scott and I'm with the safety group," said a stout man in his early 60s. "It's an alcohol- and drug-free zone, so we don't have any of that in our community."

The kids pricked up their ears for the outreach working group, which handles relations with the dozens of occupied cities. "New York is in limbo," a young woman calling herself "Mom" noted. "Occupation Seattle was raided and shut down last night, but 200 people are back in the park. We've sent medics and organizers to New York City to help there. And on the bright side here in Boston, it doesn't look like we'll be shut down any time soon." You could sense their horizons opening: This is happening all over America.

As the General Assembly broke up, teachers and chaperones were encouraged to write to other schools suggesting they make Dewey Square their own field-trip destination. One man muttered from the crowd, "Occupy your school." Several kids smiled up at him, thinking of the possibilities.