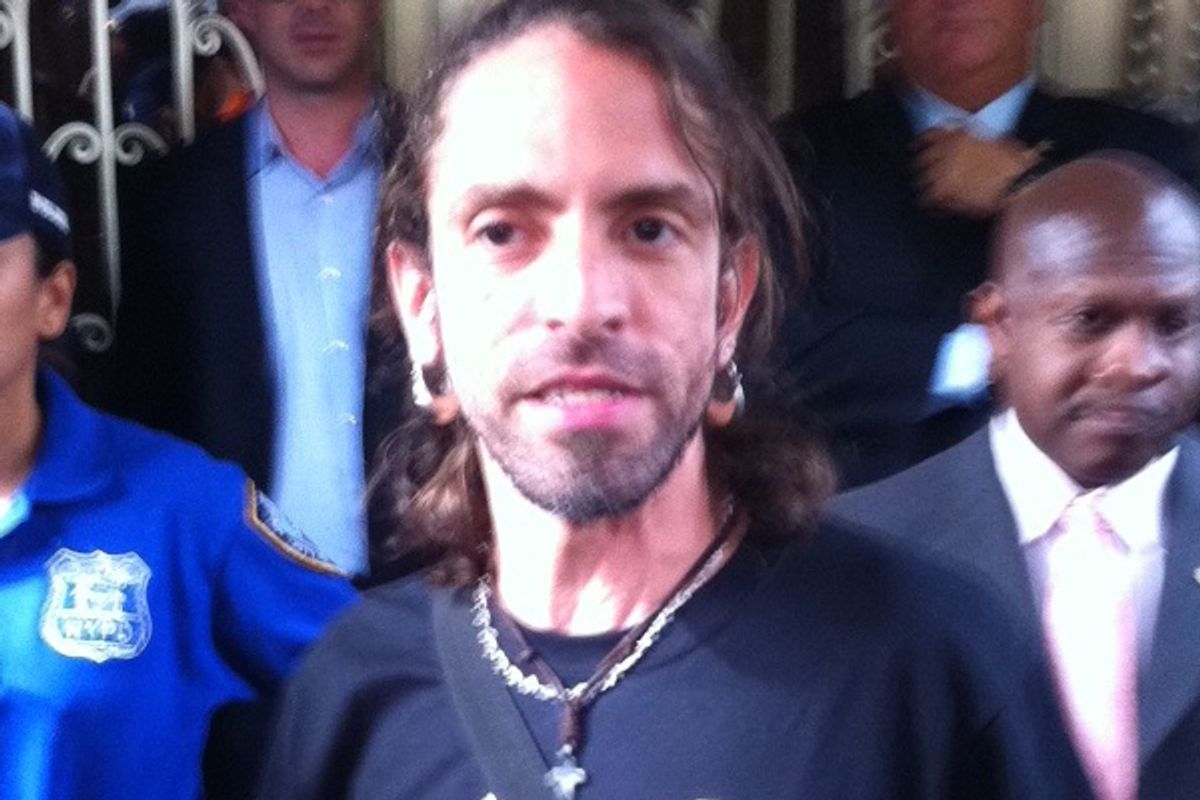 Here's a quick update on the unresolved story of the photo of an Occupy Wall Street protester apparently tackling a police officer that went national over the weekend.

The "tackling" photo appears to have been taken just moments after protester Felix Rivera-Pitre was punched in the face by NYPD Deputy Inspector Johnny Cardona. A couple of videos of the punching have gone viral on YouTube (see below for one).

Rivera-Pitre tells me that the unidentified man in the blue shirt in the "tackling" photo merely entered the melee to come to Rivera-Pitre's aid.

"He was just trying to help. The cops were pretty violent. They were the ones actually elbowing people," Rivera-Pitre says. "The reason I didn't get arrested was this guy [from the photo] was one of the guys around me. I think he was the one who started screaming, 'Save him! Save him!'"

Rivera-Pitre does not know the blue-shirted man's name, but said he had met him at Zuccotti Park earlier in the day when Rivera-Pitre was distributing daisies he had brought to underscore protesters' commitment to nonviolence.

Rivera-Pitre escaped arrest because the crowd snatched him away from the two officers on the scene. The NYPD is now seeking his arrest for allegedly attempting to elbow Cardona -- an act that police claim led to the punching. Rivera-Pitre maintains he tried to elbow no one.

"If they can find me a video where that happened, I will give you all the wealth that I have in the world," he says. "It didn't happen."

As for the protester in the blue shirt who allegedly tackled one of the officers, it's of course possible that Rivera-Pitre, in a daze after being punched, simply didn't see everything that happened. So what exactly happened is still a mystery.

Attorney Ron Kuby, who is representing Rivera-Pitre, said in an email that the status of Rivera-Pitre's case is still up in the air:

The police have what is known as an "open 61"  That is an open complaint to arrest him.  It is not a warrant (no judge issued it), nor is it done in consultation with the DA's office.  The police simply say that we want to arrest x and we will.  Yesterday, I asked the head of the Official Corruption Unit of the New York County DA's Office (which is looking into police misconduct, or not), to contact the police and inform them that the DA does not want any arrests made until the DA's investigation is concluded.  I was told "we do not control the police."  Which is, of course, the problem--no one seems to.