Voting, not OWS, will change America

A low progressive turnout in 2010 got us into this mess. We can't let that happen again 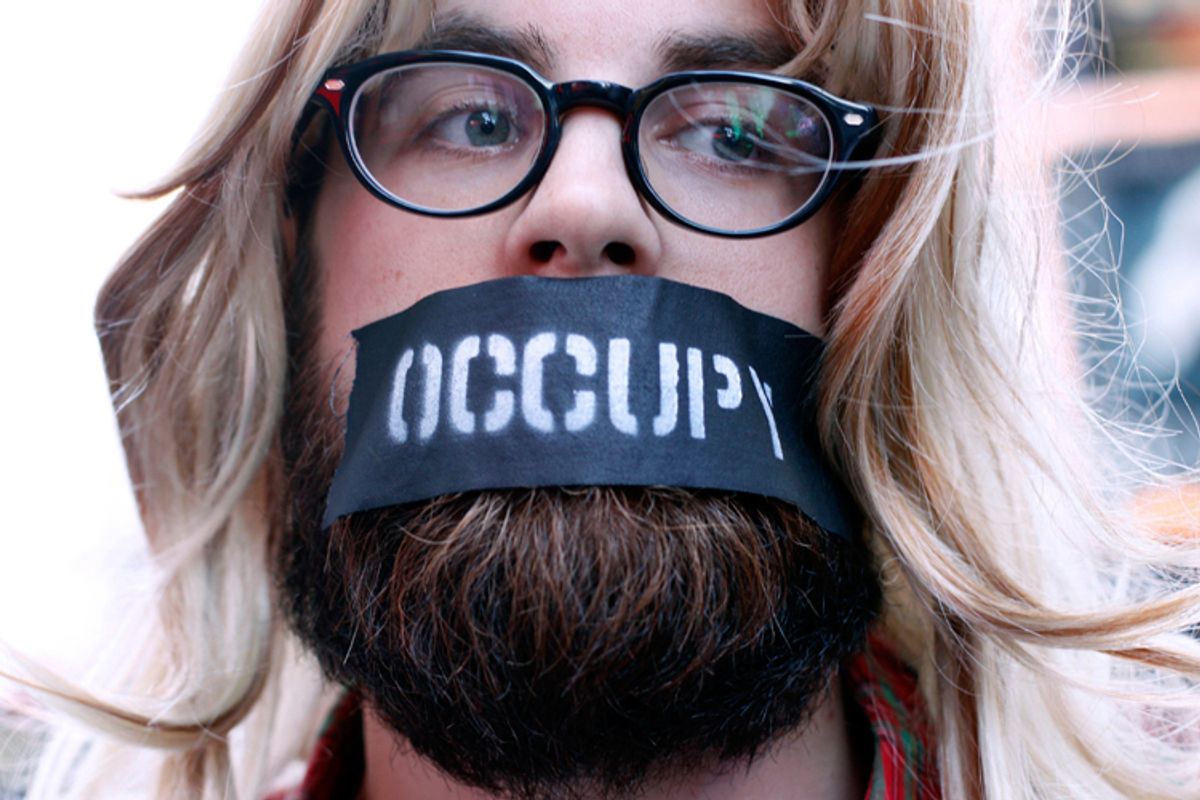 An Occupy Wall Street protester at a demonstration at Times Square on Oct. 15. (Reuters/Allison Joyce)
--

Take a close and objective look at the angry demonstrators now gathered on Wall Street, and at similar protest encampments burgeoning from San Francisco to Madrid. What you see is not simply a vast expression of rage at the crisis enveloping the world of democracy.

The demonstrations also frame a fundamental contradiction – a profound source of strength that has been transformed into a disabling weakness.

They deserve enormous credit for drawing a global spotlight to the perpetrators of that crisis: a sinister cabal of financial scamsters and right-wing politicians, backed by the dubiously “grass-roots” electorate of the Tea Party. What almost no one, on the right or left alike, wants to talk about is that the cabal was empowered by the very people who are now denouncing it.

Progressives, out of a mixture of political correctness and embarrassment, carefully avoid the subject. The Republicans are delighted at the silence, because it masks what should be fatal weaknesses in their own position.

It may not be pleasant to hear, but a massive Democratic voter cop-out in last year’s elections is what put the reactionary right in the driver’s seat, creating the disastrous logjam in Congress, and bringing to a dead halt the hyperactive first two years of the Obama administration.

Cop-out at the Polls

In 2008, more than 65 million Americans cast Democratic votes in congressional races, a 13 million-vote edge over the Republicans. In 2010, the Democratic vote plummeted to an abysmal 35 million, 6 million less than the GOP, which took decisive power in the House and paralyzed the Senate.

We think we know this story. But the truth is, we haven’t begun to absorb its full details and implications yet:

In effect, the abstainers turned a potential Democratic landslide into a full-scale collapse – with nightmarish consequences for civil rights, for the U.S. and world economies, and for social programs that range across the board from healthcare and educational funding to employment programs, pension benefits and the sagging national infrastructure.

It was a dream come true for the radical right, the sworn enemies of all public services. Their vote, measured at exit polls asking whether government was too intrusive, scarcely changed between the two elections, dropping from 50 million to 47 million.

At the same time, the number of voters believing that government should do more for its citizens – the central plank of the progressive platform – sunk from 60 million to 32 million, a staggering 47 percent slide.

These are astronomical, game-changing numbers. It makes no sense to argue that the Democratic voting collapse was a matter of demoralization. Decisions on whether to go to the polls were made by the early autumn of 2010, just 20 months into an Obama administration that had pushed through what many analysts regard as the most ambitious legislative agenda in modern U.S. history.

Half a century ago, Martin Luther King and Cesar Chavez understood that genuine change could only be achieved through long-term, patient struggle – and that the prize, in King’s famous words, was full access to the nation’s key institutions, notably the ballot box and the governing seats it fills.

The leaders and foot soldiers of the civil rights era fought with unflagging commitment, and King himself was martyred, in a two-decade campaign for the voting privileges that 2010 abstainers dismissed as unworthy of an hour’s time on a single Tuesday in November. The Wall Street demonstrators are now debating an even broader boycott of the 2012 presidential election.

Yet if two-thirds of the 28 million progressive stay-at-homes had gone to the polls last year, the U.S. Congress today would be in the hands of a solid Democratic majority beholden to liberal votes.

The nation’s key institutions stand at a momentous crossroads, ripe for fresh ideas and energy.

But in response, the anthem so far is nebulous anti-institutionalism, a “leaderless resistance movement,” as the Occupy Wall Street website proudly boasts, without defined structure or goals. “It’s not any more about parties, organizations or unions,” declares the manifesto of its Spanish counterpart, the International Commission of Sol, which also calls for mass abstention from voting.

Visceral impatience is endemic today, especially where the young are concerned. The Internet Age, with its virtual substitutes for the real thing -- for tangible community, for productive struggle – promises to deliver on every desire, easily and instantly. Just twitter a crowd into the streets, and the rest will fall into place. But the hard truth is that it takes far more than that. Ask the Iranians, the Tunisians and Egyptians, who are invariably cited as models by the Spanish and American protesters.

Neither easy nor instant solutions are possible when a society faces the challenges that greeted the incoming Obama administration in January of 2009. The nation’s first African-American president took office amid two unwinnable and unfunded wars and a global economic crash unparalleled since the Great Depression. He was confronted by a rabid political opposition that challenged the new president’s very right to govern on trumped-up charges that he is not certifiably “American,” when their transparent subtext was that he is not white.

As much as anything else, Barack Obama’s ascent to the presidency was about the slow work of acquiring power and responsibility in the machinery of representative government. So too were the many milestones that preceded his victory: the 1954 Supreme Court ruling that dismantled segregated schools; the 1964 Civil Rights Act, which prohibited discrimination based on race, color, religion or national origin; its elaboration in 1965 with a Voting Rights Act that removed the last obstacles to the polls, and a presidential executive order enforcing affirmative action guidelines.

Each of those institutional steps flowed from the pressure exerted by election results, and each of them helped rewrite the terms of national life. Only someone who was not alive in the 1950s, when the struggle began in earnest, could maintain that nothing important has changed in the United States since then.

It is far more accurate to say that almost everything has changed – which is what terrifies the conservative right. They recognize that the institutions of representative democracy are expressions of collective interest, and that the crucial vectors of population and age are aligned against them.

Their sole hope for turning back the clock lies in a new majority that doesn’t bother to vote.