Pollster Doug Schoen issues a warning that is contradicted by ... all of the available evidence 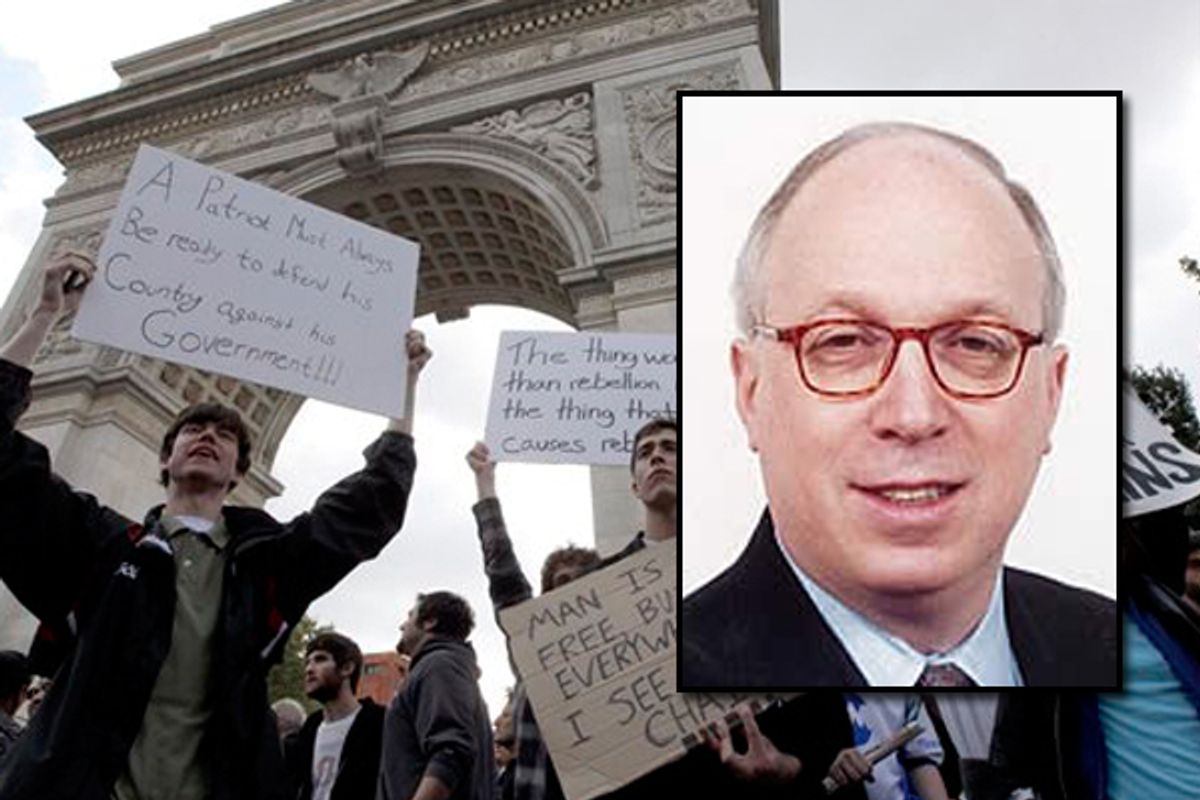 You might say that Barack Obama's election as president created the opportunity of a lifetime for well-credentialed Democratic political professionals who were either washed up or out of favor with the new administration: Lend a veneer of bipartisanship to the right's efforts to undermine Obama and they might just find new relevance, stardom and maybe even fortune through the conservative media.

Doug Schoen, a Democratic pollster who worked for the Clintons, and Pat Caddell, a once prominent pollster who hadn't been a player in Democratic politics for about two decades, have both seized the moment. They've teamed up to write a series of Op-Eds that have amplified the right's preferred narrative of Obama's presidency, playing up their Democratic affiliations and claiming that they've turned on the president "with heavy hearts."

In the summer of 2010, for instance, they accused Obama of using race to divide Americans, a characterization that is firmly at odds with reality but that conservatives eat up. As Joanthan Chait put it, "Obama himself has referred to race only rarely, but in the right-wing mind, he is endlessly accusing his political opponents of racism." After last fall's midterms, Schoen and Caddell argued that Obama's presidency was lost and that he could only save it by ... announcing that he won't seek reelection and turning himself into a lame duck for the second half of his term. This, by the way, came just before an unusually productive month of Obama's presidency.

Now Schoen is out with a new Op-Ed, this one without Caddell's name on it, warning Obama that expressing support for Occupy Wall Street could cost him the 2012 election because the movement "reflects values that are dangerously out of touch with the broad mass of the American people." Needless to say, this is precisely the image of OWS that conservative media outlets and pundits have been promoting for the past two weeks. How does Schoen know that OWS is so terrifying to swing voters? Because:

And the survey found that:

What binds a large majority of the protesters together—regardless of age, socioeconomic status or education—is a deep commitment to left-wing policies: opposition to free-market capitalism and support for radical redistribution of wealth, intense regulation of the private sector, and protectionist policies to keep American jobs from going overseas.

OK, I'll admit: if that's what swing voters believe OWS is about, then it probably would be unsettling to them. But Schoen's characterization of the movement's "radical" hostility to capitalism is based on data like this:

Sixty-five percent say that government has a moral responsibility to guarantee all citizens access to affordable health care, a college education, and a secure retirement—no matter the cost. By a large margin (77%-22%), they support raising taxes on the wealthiest Americans, but 58% oppose raising taxes for everybody, with only 36% in favor. And by a close margin, protesters are divided on whether the bank bailouts were necessary (49%) or unnecessary (51%).

You see the problem here, right? To swing voters, these positions aren't radical at all. Social Security is an extremely popular program and a Bloomberg/Washington Post poll last week found that more than two-third of Americans say that it should be left alone (along with Medicare).     And raising taxes on the rich is one of the most consistently popular concepts found in polling; it even scores well among Republicans. Plus, like the protesters, Americans are also broadly reluctant to raise taxes on everybody. The bailouts? Public opinion on those was about evenly split when they were approved three years ago, and they've only grown more unpopular since then.

So what Schoen regards as radical, far-left positions are actually very mainstream. Which may explain why OWS has actually been quite popular in every poll that's been taken about it. A survey for Time last week found that 54 percent of Americans view the movement favorably, with just 23 percent taking a negative view, while a Reuters/Ipsos poll showed a strong plurality of independents supporting the protests. Time's survey also found that 79 percent of voters agree with the statement that "the gap between rich and poor in the United States has grown too large" and that 71 percent agree that Wall Street executives who were responsible for the 2008 meltdown should be face prosecutions.

A new poll in New York State asked voters there if they think the protesters represent "the 99 percent of people that will no longer tolerate the greed and corruption of the remaining one percent" or if they are "mostly out-of-work young people copying the protestors in Cairo, with the potential to cause those kinds of riots here.” 58 percent chose the first option, while only 27 percent went with the second.

Whether Obama will actually succeed in channeling OWS into his reelection campaign is an open question. But Schoen's claim that any association with the movement is politically poisonous ignores the simple fact that most Americans are actually sympathetic to the ideas behind it. But why should that stop him?