Why what's good for GE isn't good for America 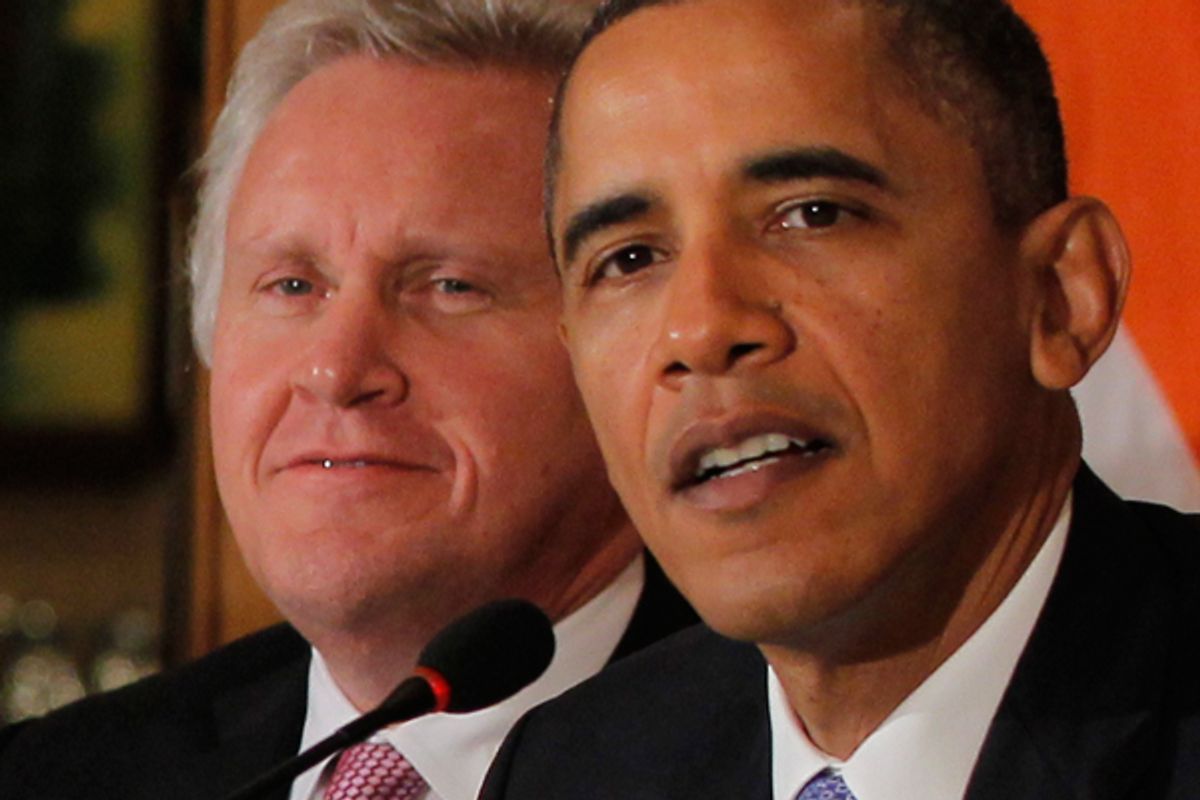 Obama's decision to appoint GE CEO Jeffrey Immelt as chairman of his Council on Jobs and Competitiveness was attacked by critics from the left before the president finished making the announcement. GE makes 60 percent of its profits overseas, and in the 10 years since Immelt took over as CEO, the company has trimmed its payrolls in the United States by 34,000 while adding 25,000 abroad. In July, six months after being appointed chairman of the jobs council, Immelt moved the headquarters of GEs 115-year old X-Ray division from Waukesha, Wis., to Beijing.

If Obama was looking for an expert in how to take advantage of globalization to boost corporate profits, Immelt would be a perfect choice. But domestic job creation? That's a tougher call.

The contradiction has never been more apparent than right now. As Obama ramps up a political campaign accurately portraying his Republican opposition as adamantly opposed to his jobs agenda, Immelt appears at one conference after another without ever even mentioning the American Jobs Act. Instead, he talks about the need for attitude adjustments -- how the American business sector must go "all-in" to "win" in the global marketplace.

The so-called jobs czar has made some inadvertently revealing comments. At a Thomson Reuters Newsmaker Event, reported the New York Times on Monday he declared that the council "was treating the effort to spur domestic growth and reduce unemployment 'like a turnaround at a company.'"

But what do turnaround specialists usually do when they swoop into a struggling company? They slash payroll, cut expenses, outsource business units to anywhere a given job can be accomplished more cheaply. That's not a strategy that will work on a national level.

The basic problem is that Immelt, as one might expect from a multinational CEO, is looking at the problem of jobs and competitiveness as if the ultimate goal was to increase corporate profitability. If the government just makes it easier for corporations to conduct their business, all will be well.

One week ago, the jobs council submitted its draft plan for boosting jobs. The plan includes five "initiatives" -- No. 4 is "Simplify Regulatory Review and Streamline Project Renewals." But a closer look reveals that all the other initiatives also include some level of regulatory streamlining as part of their recommendations. So a key part of "Investing Aggressively and Efficiently in Cutting Edge Infrastructure and Energy" is simplifying the environmental review part of the permitting process. An essential part of the "National Investment Initiative" is rolling back regulation designed to increase transparency and combat fraud. And so on.

The trade-off could not be any clearer than in the section recommending that the FDA speed up it approval process for new drugs.

...The FDA should develop a qualitative framework for benefit-risk assessment of new therapeutics and diagnostics that incorporates robust input from stakeholders, including both patients and consumers. The FDA should also consider a more flexible benefit/risk paradigm that explicitly adjusts all the elements to be considered in light of clinical need, patient risk tolerance and the need for innovation.

Don't worry so much about safety! Just give us our drugs!

The same theme is repeated with respect to the environment.

We understand the challenge of developing balanced regulations, but we believe that the jobs and energy security benefits of continuing to exploit these resources require that we tackle these issues head-on. We therefore urge all stakeholders to make extraordinary efforts to strike an intelligent balance that protects people, safety, the environment and our nation's water supplies while also allowing the economic benefits of these innovations to be realized.

In this context, "intelligent balance" mean rejiggering the system to promote resource extraction and infrastructure development at the expense of the environment. That's how you "win" against China -- by adopting their strategy of putting industrial development first and everything else last.