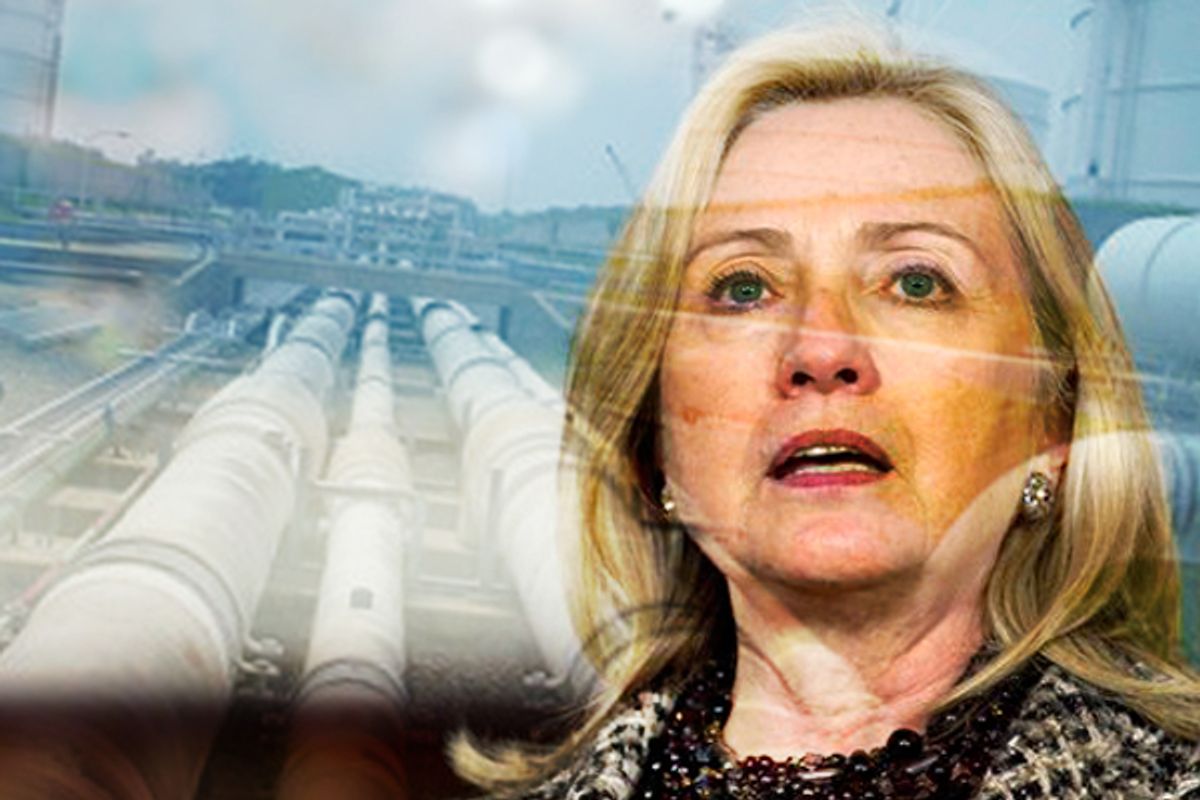 Hillary Clinton is one of those people who never really got a fair shake — she had to endure her husband’s philandering and the right-wing’s endless hatred, down to the scurrilous suggestion that she had something to do with the death of her friend Vince Foster. So it’s been a pleasure to watch her accomplished second act — pretty much everyone has had to admit that she’s been a creditable secretary of state; she spent yesterday in Tripoli where rebels-turned-rulers fired guns in her honor. Last year, a Gallup poll found she was the most admired woman in the United States.

That’s why it’s particularly painful to see her nearing the end of her career as our top diplomat with a scandal looming. It’s not too late for her to nip it in the bud, and if she doesn’t President Obama can still put a stop to it, as well. But right now, it threatens to tarnish her legacy.

Here’s how the story goes: The TransCanada corporation wants to build an oil pipeline from the tar sands of Canada down to the Gulf of Mexico. Because it crosses our border, they need a “presidential certificate of national interest,” and that can only come on the advice of the State Department, which has been carrying out a theoretically independent review process.

But even before the review process got underway, Clinton said she was "inclined" to grant the permit. Perhaps that’s because her former deputy campaign manager, Paul Elliott, had been hired as TransCanada’s chief lobbyist. (Emails unearthed by Friends of the Earth show that State Department staff were rooting hard for him — “Go Paul,” is how one of them put it, when he spread the news to this supposedly independent staffer that he’d managed to bring U.S.  Sen. Jon Tester, D-Mont., onboard as a pipeline supporter). Perhaps it’s because a whole web of lobbying firms have the same kind of overlapping ties. Employees of McKenna, Long and Aldridge, for instance, donated $41,000 to Clinton's 2008 presidential campaign, and collected at least $190,000 from TransCanada for lobbying. Or DLA Piper, whose employees were the single largest corporate source of funds for her presidential bid, and whose partner, James Blanchard, was both a big-money bundler for the campaign and a highly-paid lobbyist for the province of Alberta’s pro-pipeline effort.

The State Department standard response to this kind of accusation has been: “We meet with everyone, including environmental groups.” Clinton herself says the department remains in “listen and outreach mode” as it prepares to make a decision.

But the New York Times put the lie to this official cover earlier this month, when they revealed just how deeply compromised the State Department actually was. The State Department — and read this carefully, because it’s almost beyond belief — asked TransCanada who they would like to have conduct the "independent" pipeline review. TransCanada submitted the name of three firms, and State helpfully chose the first one on the list: Entrix Corporation. If you head over to their web site, you’ll find that TransCanada is listed as one of the company’s “major clients.”

The Times called this “flouting the intent of a federal law.” You could say it was like hiring Fox Associates for a security study of Henhouse Inc. It’s hard to imagine even the Bush administration doing anything quite this blatant — it makes a complete and utter mockery of the idea of independent review.

It also helps explain how the review found that there would be "minimal" environmental impact, even though we’re still cleaning up the Kalamazoo and Yellowstone rivers from big leaks of tar sands crude. Even though 20 of the nation’s top scientists sent the president a letter saying the pipeline was in  neither the nation’s nor the planet’s best interest. Even though our most important federal climatologist, NASA’s James Hansen, wrote recently that heavily tapping tar sands for oil would mean it was “essentially game over” for the climate.

The only good news is that this particular crime against the environment, and against good government, is still in progress. The permit hasn’t been granted yet. Clinton could still send it back for a true, fair review; barring that, the president could still insist that the certificate not be issued.

It’s become the most important environmental test for the president between now and the election. But it’s also become a legacy-sealing moment for the secretary of state, a public official with a long and powerful, but not quite complete, record.