My peculiar route to pilothood

I was into airlines as much as flying, seating charts and route maps as much as cockpits. The Blue Angels? Yawn 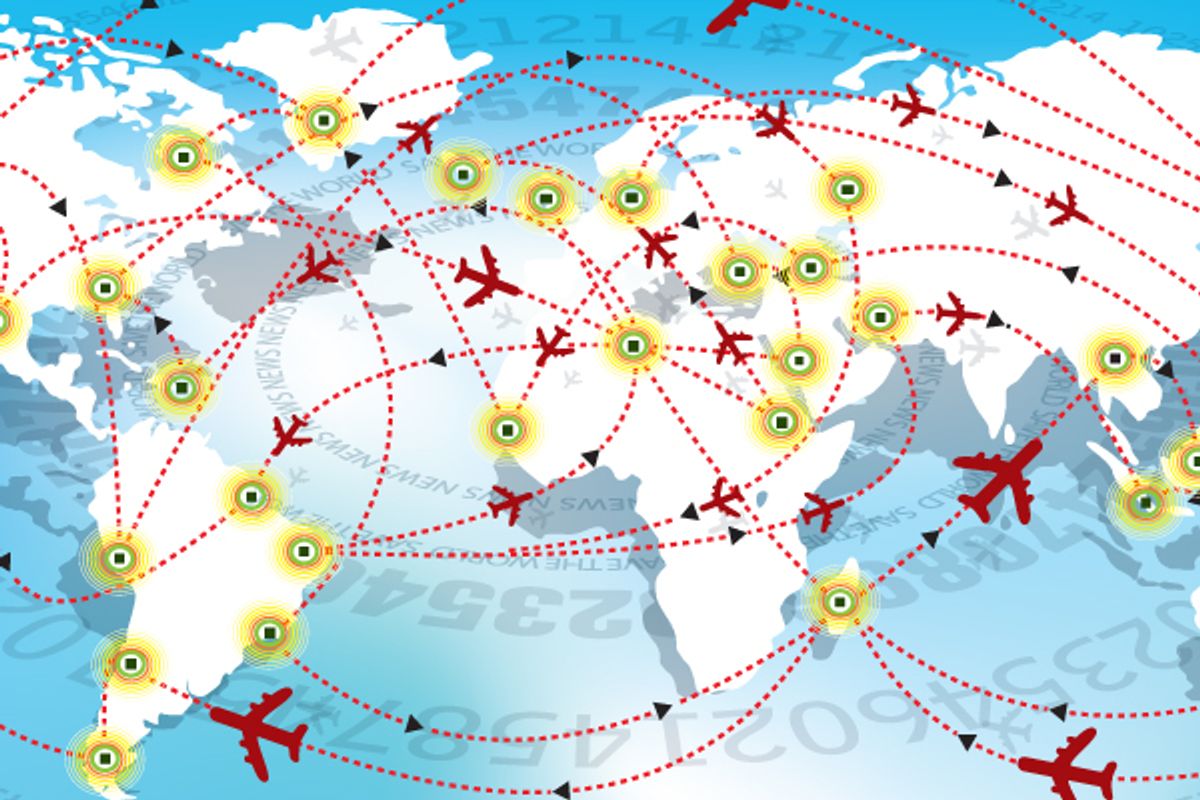 Here's something I used to do as a kid:

I imagined a city-state. It was a huge new metropolis, purpose-built from scratch -- like Brasilia or Abuja, except much bigger. A gleaming new capital of the world.

As a global crossroads, my city-state needed a strategic location, equidistant between the world's most populous regions. The spot I picked was along the Mediterranean coast of eastern Libya, where an atlas told me (perhaps not entirely accurately) there was ample empty space and access to the sea.

But it wasn't sea routes that I was interested in. My reason for creating this imaginary place was to create the imaginary airline that would have to come with it. It would be one of the biggest airlines in the world.

Bored at school, or in the evenings at the dining room table after pretending to finish my homework, I would sketch out the route network of this fictitious carrier. I'd mark off my capital city (it never had a name, and neither did its airline) with a red circle, and from there the lines burst outward like a great spider web; down into Africa, up into Europe, through the Middle East and into Asia. I got pretty specific: flights to Kinshasa went nonstop, but getting to Jakarta required a layover in Bombay. We served Victoria Falls three times weekly for the benefit of European safari-goers. Other destinations were undecided. Taipei? Should we fly to Taipei, perhaps through Hong Kong, or via our prized route to Guangzhou? I could sit for an hour or more pondering the network choices of an imaginary airline.

(I trace my enthusiasm for geography precisely to these route maps, by the way. Airlines turned me on to geography, travel and culture, not the other way around.)

I went so far as to determine which aircraft types were assigned to various routes, and drew meticulous seat maps (two-class cabins on the shorter routes, three classes for the long-hauls). Each individual plane was christened after a different world city, mountain peak or river, and this name would be lettered along the forward fuselage -- in the style of KLM's planes ("Kilimanjaro" -- what a fantastic name for a 777). Naturally we had a lot of 747s.

I created blueprints for a spectacular hub airport, including detailed sketches of the terminal and the world's grandest control tower. There would be two pairs of runways, parallel staggered so that planes never had to cross the adjacent strip. Advanced 3-D versions of this airport involved a terminal built with Legos and runways laid out with masking tape.

In many respects a version of this fantasy actually came to exist. The place where it happened is Dubai, and the airline is Emirates. On the maps I consulted in childhood, Dubai was seldom marked at all, or it appeared in minuscule font as "Dubay." Its hometown airline didn't exist until 1985. The Dubai of today needs no introduction, and Emirates has grown into the fifth biggest airline on earth measured by revenue passenger kilometers (RPK), bigger even than Lufthansa. Like my own airline did, Emirates takes advantage not only of a strong local population, but ideal geographic positioning -- a transit point for millions of people traveling between Europe, Asia, Africa and the Americas.

Singapore Airlines is another reasonable comparison. Or Cathay Pacific.

I don't know, maybe I fell into the wrong line of work.  Looking back, it's curious the way seating charts and route maps infatuated me as much or more than cockpits did (a backyard project to construct a replica 727 cockpit using plywood and spare electrical parts never came to fruition). Mine was a peculiar route to pilothood. I have never met a colleague whose formative obsessions were like mine.  While I was outlining terminals and fantasizing about Taipei, they were probably at air shows watching the Blue Angels, or at the local airstrip watching Piper Cubs practice touch-and-goes -- two things that would have bored me to tears. Pilots are not into airlines. They are into flying.

You could say I'm into both. I love what I do for a living, don't get me wrong, but I also would love to be on the side of the business that builds, plans and strategizes. I want to be the guy who launches the new routes and decides which planes to deploy on them. (Why does no U.S. carrier fly to Poland? Mine would.) I want to be the person who chooses the livery and logo; the person who picks the seat designs and the color schemes in the cabin (green; we don't see enough green). I'd be good, I think, at branding.

Would it be a global carrier or something small? I'm not sure. I have a certain fondness for both. Here's another fantasy:

A seaplane shuttle between Boston, New York and Washington. Imagine stepping onto a plane on the banks of the Potomac, or at the downtown edge of Boston Harbor, and stepping off again 45 minutes later at a pier on the Hudson River, a block or two from the subway. Imagine being within walking distance of the airport -- at * both * ends of your journey. Easy on, easy off. No lines, no congested taxiways.

Of course, this particular daydream is fraught with almost as many complications as building a giant metropolis from scratch on the coast of Libya. You'd need an economical, relatively high-capacity seaplane built to airline specs -- one of which does not exist. (Could you put a Q400 on floats, I wonder?) And what of those days when the waterfront was frozen or fogged-in? There are no ILS approaches into the Hudson.

I don't care, it's still a neat idea. Maybe Richard Branson or somebody could make it work.

Most of you would be amazed by the sheer number of airlines that do exist in the world. We can haggle over the definition of an airline, but my J.P. Worldwide Airline Fleet Directory is over 700 pages long, with detailed entries for nearly 3,000 commercial operators on six continents -- from giants like Delta, United and the aforementioned Emirates, to single-plane bush outfits in Tanzania. I'll pick the volume up, open to a random page and start scanning. I'm ashamed to admit how much time I can spend with this book.

In a lot of ways it's the oddball companies that intrigue me: the shady African freight-haulers with their unpainted Antonovs registered in Kazakhstan; the sightseeing outfits in Nepal; the Russian and Turkish charter lines; the old 727, or even a DC-3, tucked away somewhere in Latin America.

"Niche carrier" is a term we don't hear much anymore. These are small, independent airlines in business to serve a very specific market. They are content in their smallness, able to make do without fancy code-shares or partnerships. They're still out there, even in America.

For instance, Lakeshore Express, an indie carrier out of Chicago-Midway that offers scheduled service to the Pellston Regional Airport in northern Michigan. Lakeshore caters to the tourists who vacation in the Little Traverse Bay region.

Big has its obvious advantages, but so does small. Lakeshore's customers fly out of private terminals with an average check-in time of under two minutes, including security. There's free parking, and the airline's Saab 340 turboprop is outfitted with fewer seats than normal, providing extra legroom. Pilots will radio ahead to request cabs for those passengers needing ground transportation.

Out here on the East Coast, meanwhile, we've got the feisty and resilient Cape Air, whose twin-engined, nine-passenger Cessna 402s have been a fixture at Boston-Logan for many years, carrying commuters and vacationers out to Cape Cod and the islands, up into northern New England and westward into New York state. The airline runs separate, satellite operations out of St. Louis, San Juan and Guam. And although Cape Air code-shares with JetBlue and Continental, it's not the "seamless" (some would say deceptive) relationship typically found between major and affiliate. Cape Air wears its own livery and has retained a distinct company culture and identity.

Cape Air is maybe the closest thing to what we used to call a "commuter airline." Today we hear of "regional airlines," but this is a relatively new term, and really a new business model. The commuters, as we knew them, carried people from small, outlying cities into the majors' hubs. (Here in the Northeast we had Bar Harbor Airlines, Air New England, Pilgrim and PBA.) Commuters fed the major carrier networks, they did not fly on behalf of them. The commuters went where the majors couldn't. You rode a commuter plane from Pasco to Seattle, or from Rutland to Boston. You didn't ride a commuter plane from New York to Dallas, or from Chicago to Philadelphia, the way you can nowadays. Such a thing was unthinkable.

The other day I came across an old aerial photograph of LaGuardia airport. It was taken from a few thousand feet, looking straight down at the terminal complex. Judging from the aircraft types, I dated the picture somewhere in the mid- to late 1980s. What most struck me was an almost complete absence of regional planes. There were three or four commuter turboprops, but everything else was major-league metal: 737s, 727s, even some widebodies: 767s, DC-10s and L-1011s. That same view today would be dominated by 50-, 70- and 90-seat RJs, with mainline aircraft a minority.

Over the past two decades the regional sector has come to account for a full 50 percent -- one-half -- of all commercial departures in America. That's simply astonishing. How did this happen?

One way it happened is that the majors learned that it was cheaper to farm out a lot of their flying to regional affiliates than to do it themselves. Regional airline employees earn a pittance, while technological advances in small jet design made even longer journeys viable on a cost-per-seat basis. One can hardly blame them. And with the right coat of paint on the fuselage, who would know the difference? Nowadays the vast majority of passengers can't even tell you which airline -- whose plane, whose pilots, whose mechanics or whose flight attendants -- is actually operating the Canadair or Embraer regional jet they're sitting on.

It's good and bad for the passenger, I guess. There are RJs going everywhere, all the time. They're fast and safe and relatively comfortable (certainly compared to the commuter planes of old). On the downside, they're an inefficient use of air- and ground space, and a prime contributor to congestion and delays.

Getting back to that desktop airline of my youth, with my route maps and Legos. How old was I, you're wondering? I'm not saying, except that I was probably older than I should have been.

I still dabble in imaginary airlines from time to time, if I've got nothing to do or if somebody sticks a blank sheet of paper in front of me. I sketch routes, logos, liveries and the occasional seating diagram. For example, the South American nation of Guyana no longer has its own national airline. So, bored one night at my desk, I invented one. Its logo and livery were an adaptation of the "Golden Arrow" of the Guyanese flag. Yellow and green. Miami, Port of Spain, New York and Toronto (a lot of expat Guyanese in YYZ) were on the route map. Cessna Caravans had the in-country routes, and a Dash-8 flew daily up to Caracas and over to Paramaribo. Could an old 767-200 make money on a route between Georgetown and London, maybe with a stopover in Trinidad? I'm not sure. But it was fun to think about.