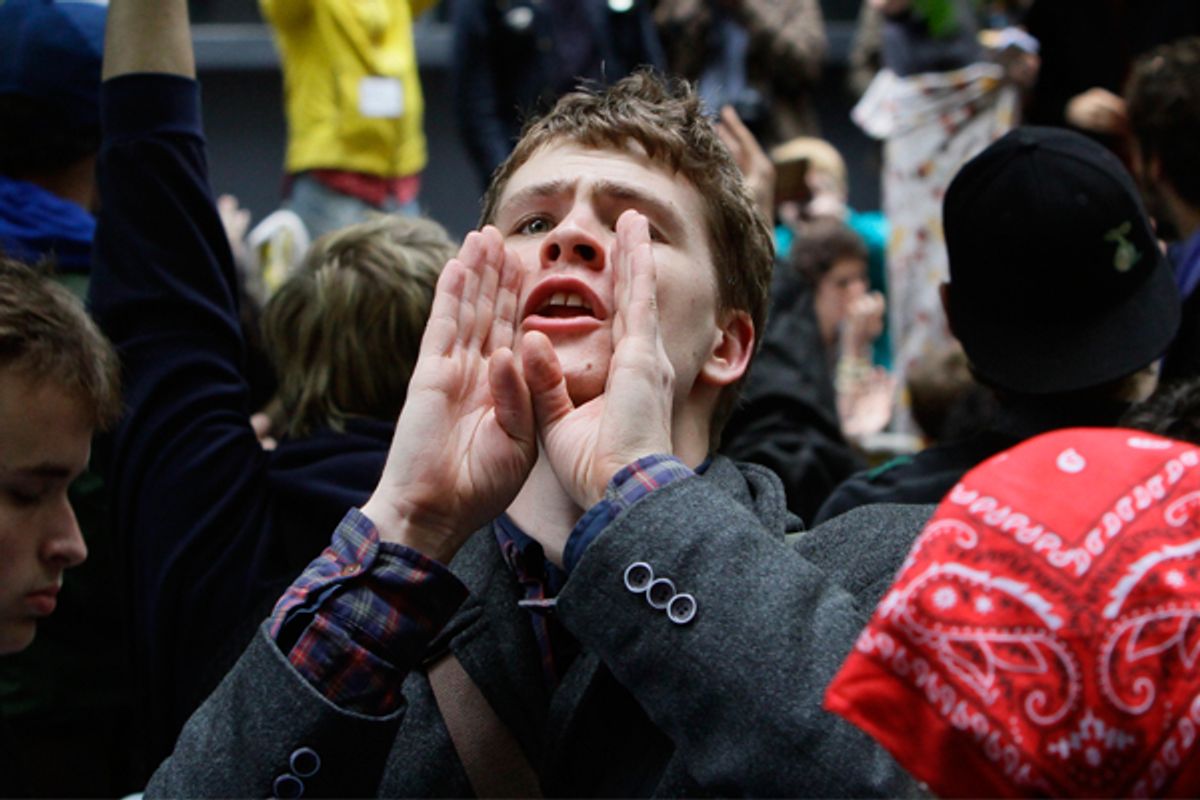 To all but a few seasoned activists, one of the most novel and at times befuddling characteristics of Occupy Wall Street is its structure: radically decentralized, few if any recognizable leaders, many (but not all) decisions made by consensus at a daily open group meeting known as the general assembly.

The unconventional structure has seemed to contribute to Occupy's appeal and growth, as well as its resistance to specifying traditional political demands. (Though as I've previously reported, there are plenty of voices within Occupy that want to make demands. The debate continues.)

To learn more about the theory behind Occupy's structure, and its historical precedents, I spoke to organizer Marina Sitrin.

Besides being a member of Occupy's legal and facilitation working groups, she is a lawyer, a writer and a postdoctoral fellow at the Committee on Globalization and Social Change at the CUNY Graduate Center. In 2006, Sitrin published "Horizontalism: Voices of Popular Power in Argentina," a study of the decentralized organizing that occurred in Argentina following an economic crisis in 2001.

What follows is a transcript of our conversation, edited for length.

Define the concept of horizontalism and explain where the term comes from.

In 1999 we had the Seattle [World Trade Organization] protests in the U.S. and globally all kinds of groups organized. I was in the direct action group in New York, for example, after 1999.  That was also organized in assemblies, similar to the general assembly that we're now using in Liberty Plaza. There were working groups that were generally autonomous, but if a working group was making a decision that would affect the whole body, a proposal would have to come before the body. The working groups were run by a consensus or consensus-based process. That means rather than just taking up or down votes, you strive to come to some kind of agreement, even if imperfect. So even if some people don't feel fabulous about a decision, the vast majority of people  will at least feel decent about it -- instead of having 40 percent of the people hating the decision. There is also sometimes a facilitator who pays attention to power dynamics in the group: gender, marginalized voices, race and class.

Another important moment was 2001, when there was a building economic crisis in Argentina, and the government, fearing a run on banks, closed down bank accounts. In response, people went out into the streets banging pots and pans. It was not organized by political parties. It was not organized in a hierarchical way. People describe it as just going out into the streets and finding each other. This is the first time anyone knows of the word "horizontalidad" -- which is where the term "horizontalism" comes from -- being used. People went into the streets by the tens and hundreds of thousands and formed neighborhood assemblies -- first to just meet their basic needs, but then it got more sophisticated. Unemployed workers were also creating horizontal assemblies; in workplaces that had generally been abandoned by the owners, workers went in and recuperated them.

In the context of Occupy Wall Street, does horizontalism mean in practice that essentially everything is voted on in a group meeting?

Not at all. Those decisions that will affect the group in a substantial way are decided upon by the general assembly. General assembly is just one of the many tools to make the most participatory gathering possible. The intention is to have everyone be able to speak and be heard. But every day, there are probably hundreds of decisions being made in the dozens of working groups. That's everything from how does food happen every day to who is translating simultaneously in different languages to who is doing workshops and what education programs are being scheduled.

Each working group usually uses some form of consensus-based decision-making. The committees are open to everyone who wants to participate. The finance group and the legal group are also open but there's more of a process to become involved in those groups. They deal with sensitive issues, so we need to know people.

The two things are absolutely related. There is a politics in horizontal relationships; there is a politics in trying to achieve direct democracy and mass participation. What we're trying to do is create the most participatory space possible. Then the conversation from demands can only come out of a truly democratic space. Who are we, even if it's a few thousand people in Zuccotti Park, to come up with demands? To come up with a list of demands I don't think would be any different from what political parties do, and that's something we're completely against.

The way in which we're organizing is part of our politics. If you're placing demands on an institution or the state, you're creating a kind of dialogue, rather than creating an open space for democratic discussion within the plaza.

I know you can only speak for yourself, not for the movement. But do you have a vision in which political change could come out of this? Or is that not the point? Is the thing itself the end?

The thing itself is only part of the end. My personal vision is to see many, many more examples of people in their workplaces, in their schools, and in their neighborhoods creating these participatory spaces. Whether you use a general assembly or another form of direct democracy, it doesn't really matter. The importance is that everyone is participating actively and can make decisions about things that affect their lives because right now we're excluded from decisions that affect our lives.

I've heard a critique both from within and from without of Occupy that the movement is too process-oriented and not engaged enough in traditional politics. Does the movement start engaging with electoral politics or legislative politics at some point?

The beginning point of the movement, of our coming together in this way, was precisely because the political parties had nothing to offer us. The opposite. We have been excluded from all conversations, and the results have been disastrous. What we're doing is opening space and trying to spark people's imaginations as to what participation in society could mean and what it could look like. What this will look like and what people want has yet to be determined, because we have only just begun to talk to each other.

Are there examples of horizontally organized movements outside the U.S. that ended up having a sharp focus on traditional politics and brought about, say, legislative change?

In Argentina, those movements that directly and regularly engaged with institutional power became less and less horizontal over time. The problem is when you start to engage in that kind of dialogue, it's not a dialogue between equals, so it's very difficult to maintain a radical form of democracy. That doesn't mean groups at certain points can't make demands. I think you have to be very careful. The more successful movements -- for example, the recuperated workplaces in Argentina -- continue to be horizontal. They have a relationship to the state, but they're very careful to maintain their agenda when they relate to the government.

So if the thing itself is part of the end, and in some cases there might be demands made on traditional institutions of power, are there other things that could result from Occupy?

Ideally what would result from it is people feeling like they are agents of change. That comes out of conversations about what change would look like. That would have a direct effect first on things like your workplace or your school or your neighborhood. I don't think it's that realistic that we're going to get fundamental change from the system that created this crisis by occupying plazas. I think the occupying creates a new way of relating for people that they can then take to other spheres of life and work.