Record number of deportations still not enough for anti-immigration zealots

The Obama administration kicked out 400,000 people this year, satisfying no one and winning no support for reform 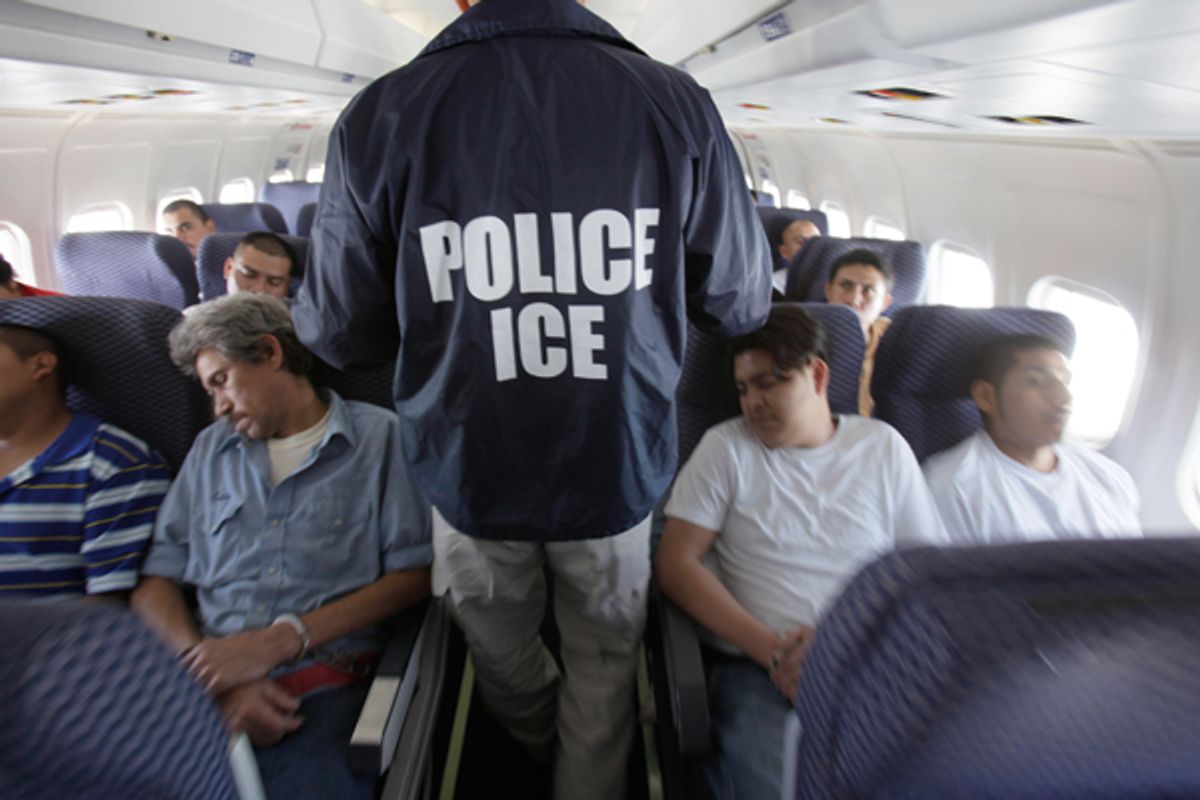 The Obama administration deported a record number of immigrants in fiscal year 2011. Nearly 400,000 people kicked out of America. That must thrill the anti-immigration crowd, right? Eh, not so much. Mark Krikorian, one of the National Review's resident anti-immigration zealots, says the record number of deportations doesn't count, because there will never, ever be enough deportations for this crowd.

"But when you look at history, the 'largest number' is only about 1,700 more than two years ago," Krikorian says. So most deportations ever, but not by a large enough margin.

Nor is the stagnation in the deportation numbers due to a temporary diversion of resources, as after 9/11: The Obama administration, as a matter of policy, refuses to even ask Congress for the resources needed to deport any more than 400,000 people. Now, 400,000 deportations (of illegal aliens, of course, but also of legal aliens who made themselves deportable because of crimes) is a lot, but it can easily be doubled; I remember one of the top people at INS in the Clinton years telling me that the 114,000 removed in 1997 was a really, really big number and sufficient proof of their seriousness about immigration enforcement.

Did you get that, at the end? Democrats can deport exponentially more people, but it simply won't be enough, ever. Deport 500,000 people and they'll simply ask why you didn't deport 600,000.

Frontline last night reported on the depressing reality of our mass deportation program, in which law enforcement agencies are used to meet the federal government's arbitrarily selected quota of immigrants to deport, in order to please people like the unpleasable Mark Krikorian. It's depressing. The "point" is to establish seriousness about enforcement in order to grease the wheels for reform. That isn't happening.

Obama's strategy isn't working on any front, for anyone. Lay voters skeptical of immigration reform aren't paying attention to the deportation numbers and don't believe the president is serious about "enforcement." Those in favor of immigration reform are getting all "enforcement" and no reform (and no serious possibility of reform with a Republican House). Anti-immigration elite Republicans will never, ever credit the president for record deportations, because they hate the president and wish for mass deportation of everyone. And this system especially doesn't work for the actual human beings who are rounded up, sent en masse to horrific detention centers, and then kicked out of their adopted home, regardless of whether they have lives or families here. All in the name of establishing support for reform that isn't coming.

It's a pointless exercise in brutal government "toughness" that hurts innocent people. And despite that, it's not winning Republican support.