This is really the best the GOP can do? 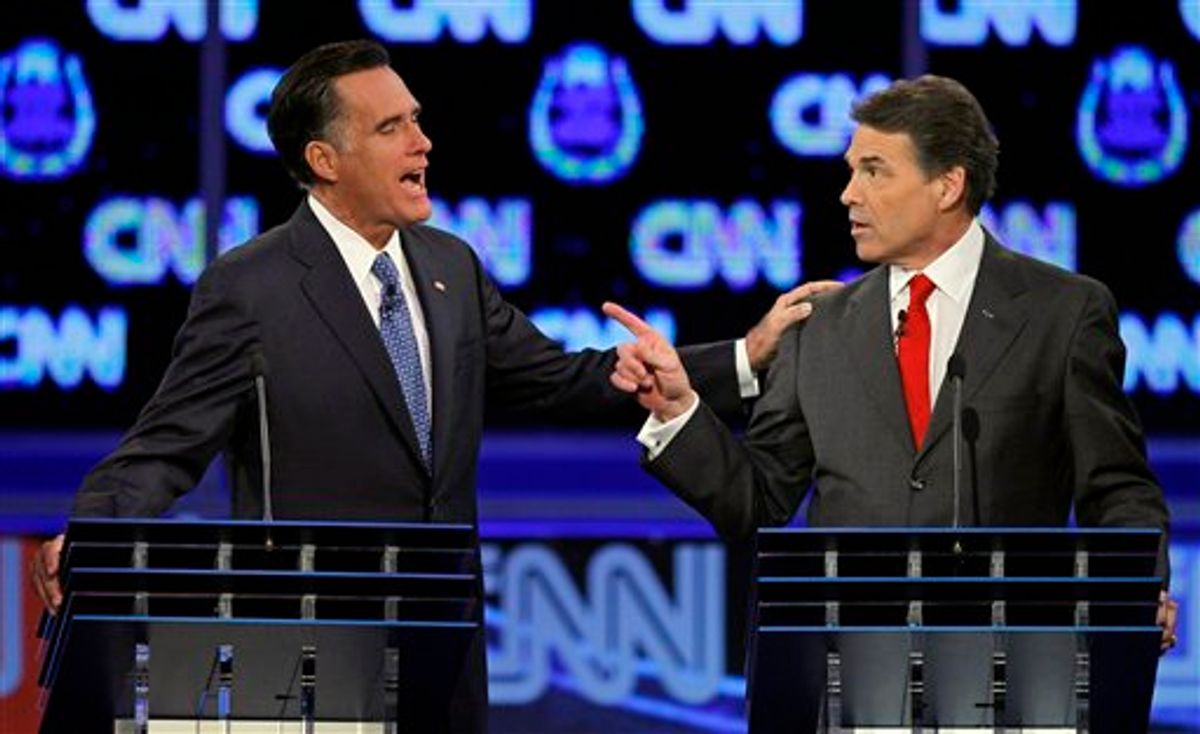 It's probably not a good idea to declare a winner of Tuesday night's Republican presidential debate just yet. It was a volatile two hours with multiple accusations of lying and one instance of physical contact between candidates. As Taegan Goddard noted when it ended, "Because there were so many heated exchanges that will be replayed over the next 48 hours, the perception of who did well could change significantly for those who didn't tune in tonight."

What we can say is that the three candidates who came into the debate with the strongest poll numbers -- Mitt Romney, Herman Cain and Rick Perry -- each turned in performances that could lead them to be labeled the night's loser when perceptions harden and turn into conventional wisdom.

Let's start with Romney, one of the two stars of the evening's most combustible moment. It came when Perry, who clearly showed up eager to prove that he could land a punch (and stay awake for two hours!), got personal on the subject of immigration and brought up an old story about illegal immigrants doing landscaping work at Romney's Belmont, Mass., property.

The background, for what it's worth: In December 2006, the Boston Globe reported that the landscaping company Romney had used for years employed undocumented workers. Romney claimed that he'd had no idea and promised to look into it. But a year later, the Globe reported that Romney was still using the same company and that the company was still employing undocumented workers. Romney immediately fired the company and insisted that its owner had guaranteed him "in very certain" terms after the 2006 story that the legal status of every worker would be verified going forward.

Thus did Perry turn to Romney on Tuesday night and say: "You hired illegals in your home, and you knew about it for a year. And the idea that you stand here before us and you talk about that you're strong on immigration is on its face the heighth (sic) of hypocrisy." Whether Romney handled this ably or terribly is a matter of interpretation.

You could say he handled it well because he didn't miss a beat in brushing off Perry's charge ("I don't think I've ever hired an illegal in my life. And I'm looking forward to finding your facts on that"), then turned the tables by highlighting Perry's vulnerabilities on immigration (opposition to a border fence and support for in-state tuition for the children of illegal immigrants). "If there’s someone who has a record as governor with regards to illegal immigration that doesn’t stand up to muster it’s you, not me," Romney declared.

Romney has done this kind of thing before, and he's pretty good at it. On issue after issue, he left a paper trail in Massachusetts that should make him totally unacceptable to the national Republican electorate. And yet every time an opponent has tried to call him on a particular aspect of his history in one of these debates, Romney has feigned confusion over how anyone could question his consistency and thrown the charge right back in his opponent's face. He sells it with such confidence that it can be easy to believe. (Actually, he was good at this back in his Massachusetts days too.) Is this how his exchange with Perry on Tuesday will be remembered? Maybe.

But Romney's behavior was also different this time. Perry clearly got under his skin in a way that no other candidate has this year, and it showed, particularly when Perry tried to interject during Romney's answer and Romney responded by stepping toward Perry, putting a hand on his shoulder and repeating several times, "I'm speaking!" In previous debates, Romney has made sure to smile and maintain composure when his opponents have attacked him, but his expression changed to one of anger as soon as Perry interrupted him. It was the most heated moment of the night, one that is already featuring prominently in highlight packages, and Romney looked red-faced and almost unhinged during it. TPM captured video of the full exchange:

Another potential problem for Romney came moments later, when he tried to put the landscaping story in context. In retelling his version of the story, Romney said that he'd gone to the company and said, "Look, you can't have any illegals working on our property. I'm running for office, for Pete's sake, you can't have illegals." Here's more video from TPM:

With that, Romney generated a clip that will be recycled endlessly if he wins the Republican nomination, and also one that could shape assessments of his debate performance in the next few days.

Then there's Perry. You could say he had a good night because he brought some of Romney's worst tendencies to the surface for the first time in this debate season. But he also looked very bad as he did it, and in several other moments.

For one thing, Perry failed to set up the immigration attack properly. It's an old story, one that played a role in the 2008 GOP race but that hasn't been the source of much conversation this time around. Many viewers on Tuesday had probably forgotten about it, and the details were probably fuzzy for those who did remember it. But when he brought it up, Perry provided no context; he simply assumed that everyone knew exactly what he was talking about. His rebuttal after Romney's initial response was just as weak.

"You stood here in front of the American people and did not tell the truth that you had illegals working on your property," Perry said, "and the newspaper came to you and, and brought it to your attention, and you still a year later had those individuals working for you." Since he provided none of the specifics, most viewers probably had only a vague idea of what Perry was talking about.

He also may have come across as excessively confrontational. As he went after Romney, it very much felt like Perry was repeating lines he'd rehearsed before the debate. And when he was left to improvise, Perry frequently seemed unsure of himself, with awkward, painful pauses marring many of his answers. At one point, he actually got into a tiff with Anderson Cooper, eliciting audible jeers from the crowd by bluntly refusing the moderator's request that he answer a specific question. (In fairness, the crowd may have been disproportionately composed of Romney backers; the debate was held in Nevada, a state where Romney won a decisive victory in 2008. But did most viewers at home, who heard Perry booed on several occasions, know this?) To the extent Perry had a good night on Tuesday, it was in spite of himself.

And what about Herman Cain, who came into the debate with all the momentum in the world, the sudden leader in multiple national polls? Well, the fact that it's taken this long to get to him probably tells you all you need to know about how things went for him. His night could probably be split into two parts: The first 10 minutes, when every other candidate on stage took turns blasting Cain's 9-9-9 tax plan while Cain struggled to formulate a compelling response (he repeatedly invoked an apples/oranges metaphor, which proved almost impossible to follow, like when he said that "We are replacing the current tax code with oranges"); and the next 110, when he seemed to fade into the background and return to the relative anonymity he's enjoyed in most other debates this year.

The best that can be said about Cain's performance is that it might have been overshadowed by the Romney-Perry theatrics. So while there's a chance his bubble burst onstage in Las Vegas, there's also a chance that it will endure just a little longer. After all, if the debate demonstrated nothing else, it's just how slim the pickings are for Republicans.