Moammar Gadhafi died in the sands of Sirte, but his violent end was shown around the world. Why can't we look away? 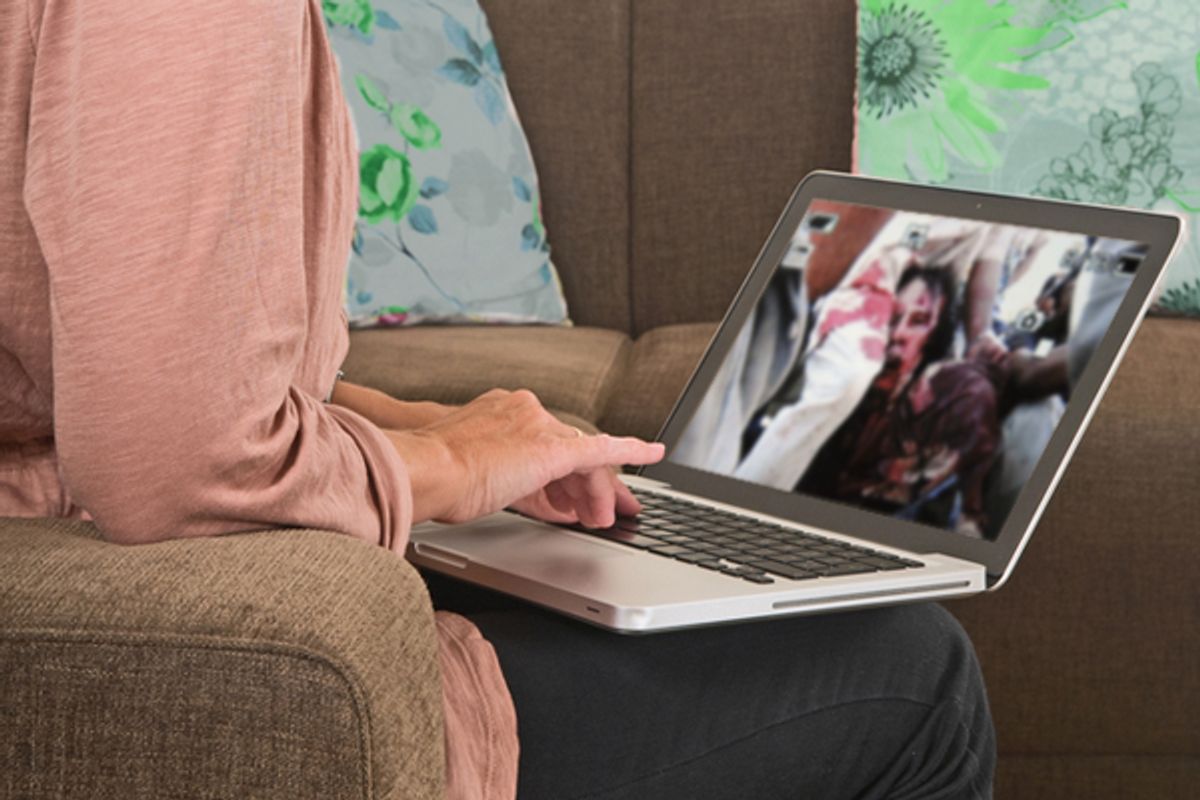 If you're reading this, chances are you've already seen the gruesome photographs and videos purporting to show a battered, bloody Moammar Gadhafi, taken early this morning in the Libyan city of Sirte.

When these images first appeared, news organizations were cautious to promote them; many added them to live blogs while conceding that what they seemed to show could not be independently confirmed. But as they spread steadily across the Internet, the question of their verifiability became secondary to the power of the story they seemed to tell about the death Wednesday of the Libyan strongman.

Why are we so fascinated by images such as these -- gripping action shots that surface and circulate in conjunction with historical flashpoints -- even as they make us queasy? Start with the horror of witnessing a life-or-death moment.

"They're powerful," says Barbie Zelizer (author of "About to Die: How News Images Move the Public" and professor of communication at the University of Pennsylvania), "because they are gruesome."

"[Images such as these] are at the limits of what we tend to think of as decent, appropriate imagery on the front spaces and front pages of our news environment. But they're powerful also because they suggest, in a very before-and-after fashion, that we are now in a new moment."

Of course, says Susie Linfield, author of "The Cruel Radiance: Photography and Political Violence" and director of the cultural reporting and criticism department at New York University, these images "can be interpreted in very, very different ways." That's one reason why the Obama administration decided not to release pictures of Osama bin Laden after he was captured and killed by U.S. forces.

"The video of Daniel Pearl being executed, for example, is used as a recruiting tool by al-Qaida and other groups. Some people look at that and think that that's a great inspirational video, and a great advertisement for jihad. Other people look at it, obviously, in a very different way. So I would not make any assumptions about how 'everyone' -- certainly all over the world, and not even in this country -- views any particular images."

In this case, Zelizer notes, Gadhafi's political identity plays a key role. "When you see a picture of a dead ruler," she explains, "the suggestion somehow is that his rule is behind us."

At the same time, while we look to pictures for historical accuracy, they, too, can be manipulated, shown out of context or reflect just a certain frame on reality.

"We have to recognize that images are always segments of larger sequences of actions," Zelizer says. "So there are all kinds of questions about what we're looking at. What happened before the image was taken; who took the image; how exactly he died; whether we're looking at a dying man or a corpse. All of those aspects of the actual picture still are kind of murky at this point in time, although I think they will become clear very quickly. But at some level, [the confusion] is OK; it doesn't matter, because what we think we're seeing corresponds to what we want to see."

Is the fact that these images fly around the world and back before complete explanation or verification is possible a cause for concern? "[The speed] probably is dangerous," Linfield says. "But the genie of speed has escaped from the bottle; I don't think it's going to be put back in. You know, news, pseudo-news, quasi-news, all those things travel at a very, very fast pace today. And it's impossible really to envision any sort of slowdown. Do I think that's a good thing? No, I don't think that's a good thing. I think it's a real thing.

"To me, it's not so much the time frame [of when the photos are posted that is important]; it's more what sort of context surrounds them -- what sort of analysis, what sort of reports. The images themselves -- they need context, they need thinking. The images can't think for us; we need to think about them. The same was true of the Abu Ghraib images; once they were out, they zipped all over the world in a couple of days. But all the ramifications of what they meant took a longer time to figure out."

Nevertheless, these questions about technology and appropriateness have existed as long as the media itself: "I think that we absolutely go in waves back and forth about what's appropriate to show," says Zelizer. "And although at any given moment what you will get are scores of people saying this is over the limit of what we're able to see, those laments drive from a particular moral, political and technological set of circumstances.

"We saw corpses in the liberation of the concentration camps in the middle of the 1940s, at a point in time when we hadn't really seen corpses across the journalistic landscape [before]. And ... it was seen as so necessary to see those images, that you had photographers being ordered to change direction and go to the concentration camps so that they could map out these pictures, which then appeared in special sections of newspapers and journals all across the world. [It's the same, for instance,] in the case of [the death of] Saddam Hussein: When there is a moral, political and technological imperative to see, we see. When that is not in place, we don't see. And then what you get is, 'Oh my God, these are grotesque photos; we shouldn't be having them on our front pages.'"

Death shots are, of course, different from photos or videos taken before death; in Gadhafi's case, both types of footage appear to exist. This stunning video, released earlier today, ostensibly shows Gadhafi being overtaken by rebels before his death:

"Images of people facing death ... invite us to entertain multiple possibilities," Zelizer tells me. "Is he going to die? Is he going to get pulled from the truck? Is he going to escape? Is somebody going to take pity on him? Is he only going to be wounded? All those things go through your head when you see a picture of somebody not quite dead. And that's countered by the fact that once you see the picture of him already dead, you can do nothing. One really engages us in imagining all kinds of things that might happen; the other hits us with the brutal fact that there's nothing more to be done -- that it's over. [In this case,] I think it's too early to say which picture ... will actually be the one that circulates over time; my guess would be that it will be the one of Gadhafi already dead."

Art critic Dave Hickey, however, suggests even these gruesome images lack the power they once had.

"I think we're so inured to this kind of [image], and so inured to having them faked, that I don't think they make any difference at all," he says. "I thought that [Susan Sontag's book "Regarding the Pain of Others"] was incredibly wrong-headed, because she was always talking about photography; she never addressed the issue of what it's like to actually see somebody killed.