Do we know what OWS wants yet?

A national general assembly? A new New Deal? Horizontal democracy? No, OWS doesn't have demands yet, and that's OK 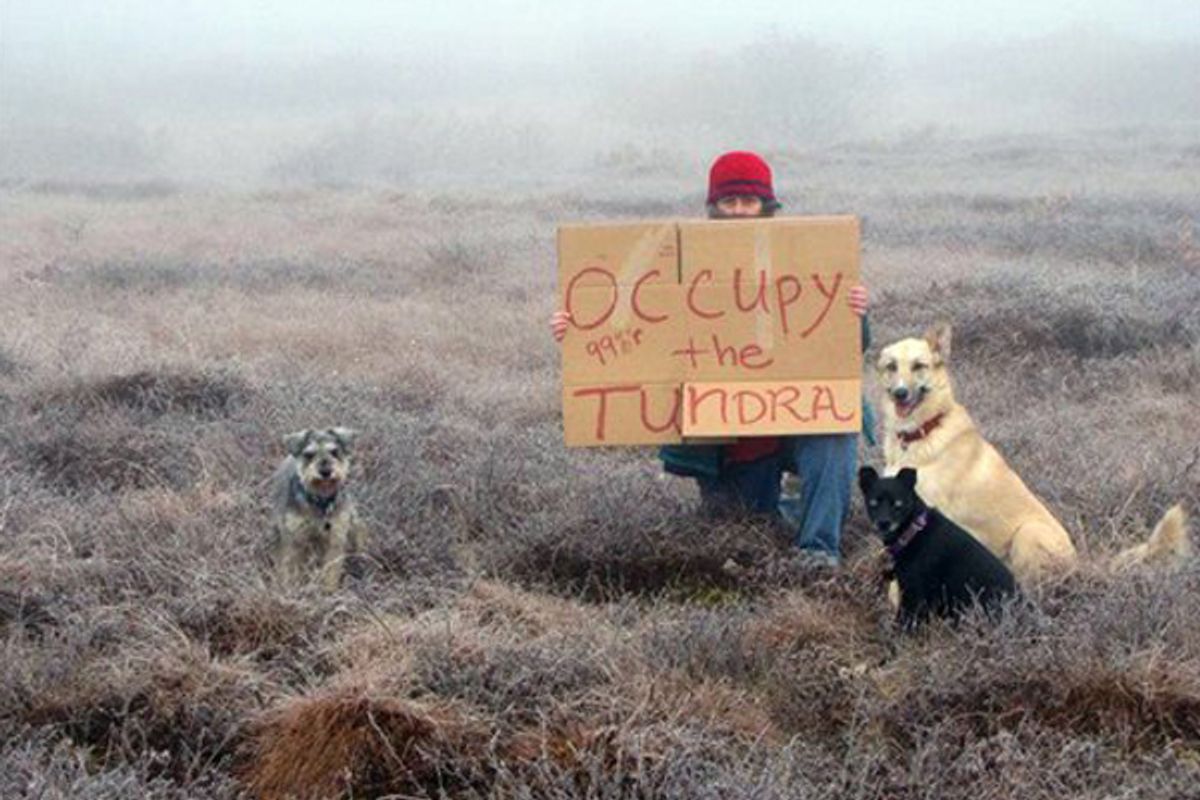 Diane McEachern sits with her dogs Mr. Snickers, left, Seabiscuit, and Ruffian, right, on the tundra near Bethel, Alaska. McEachern wanted to participate in the Occupy Wall Street protests so she gathered her dogs, bundled up and went out to the tundra with a homemade sign that read "Occupy the Tundra." (AP/Diane McEachern)
--

The Occupy Wall Street movement shows no signs of flagging, and folks on the left continue to debate what it all means. I've said repeatedly I'm watching, I'm curious, and I'm not demanding demands right now. But demands are forming, within subgroups of the demonstrators, and it will be interesting to see what happens in the weeks to come.

I'm just going to link to a few sites and posts I found really fascinating – and then share the conversation I had with Robert Reich and Chris Matthews, about Reich's proposals, on "Hardball." Granted, no one is asking Reich (or me) to come up with ideas for the group, but he's put his out there, on Salon and elsewhere: a real public jobs plan, including a WPA and a Civilian Conservation Corps, to be financed by cutting the military budget in half and big tax hikes on the wealthiest.

There's a "99 percent declaration" that calls for a national general assembly of representatives from all 435 congressional districts to gather on July 4, 2012, to assemble a list of grievances and solutions that isn't official. But the draft list overlaps in some ways with Reich's proposal: public works programs, tax hikes, debt forgiveness and lots of muscular ways to get money out of politics.

I also read a long and fascinating piece by David Graeber, an author, scholar and activist who believes he was the person (but admits others might make the same claim) who came up with what I think is the best thing yet about the protest, the slogan "We are the 99 percent." (Yves Smith says, in Graeber's piece, that it was actually David DeGraw of Amped Status.) As I said on "Hardball" today, and on Salon Monday night, it's the 21st century version of e pluribus unum.

Graeber explains how a group of small-a anarchists and direct action folks peacefully took Occupy Wall Street away from the divisive, top-down Workers' World Party, who organized large but controversial anti-Iraq war demonstrations under the banner of ANSWER in 2003. Calling for a "general assembly" to plan OWS Aug. 2, in fact the WWP folks organized an event its leaders tightly controlled, until Graeber and a small group began to model a horizontal, direct-democracy general assembly right in the middle of the WWP meeting. That group kept meeting and planning and pulled together the Sept. 17 demonstration – and was shocked to find 2,000 at Zuccotti Square. And shocked by what's come after.

What accounted for the demonstration's persistence and growing success? Graeber has a few ideas, and I'm going to quote him at length, thought the article is about much more than this, and should be read in full. In an early piece, he focused on the students at Zuccotti who told an OWS videographer:

"I did everything I was supposed to! I worked hard, studied hard, got into college. Now I’m unemployed, with no prospects, and $50 to $80,000.00 in debt.” These were kids who played by the rules, and were rewarded by a future of constant harassment, of being told they were worthless deadbeats by agents of those very financial institutions who—after having spectacularly failed to play by the rules, and crashing the world economy as a result, were saved and coddled by the government in all the ways that ordinary Americans such as themselves, equally spectacularly, were not.

"We are watching,” I wrote, “the beginnings of the defiant self-assertion of a new generation of Americans, a generation who are looking forward to finishing their education with no jobs, no future, but still saddled with enormous and unforgivable debt….

Ordinarily, though, the plight of the indebted college graduate would not be the sort of issue that would speak directly to the hearts of, say, members of New York City’s Transit Worker’s Union — which, at the time of writing, is not only supporting the occupation, but suing the New York Police Department for commandeering their buses to conduct a mass arrest of OWS activists blocking the Brooklyn Bridge. Why would a protest by educated youth strike such a chord across America, in a way that it probably wouldn’t have in 1967, or even 1990? Clearly, it has much to do with the financialization of capital. It may well be the case by now that most of Wall Street’s profits are no longer to be being extracted indirectly, through the wage system, at all, but taken directly from the pockets of ordinary Americans. I say “may” because we don’t really have the numbers. In a way this is telling in itself.

For all the endless statistical data available on every aspect of our economic system, I have been unable to find any economist who can tell me how much of an average American’s annual income, let alone life income, ends up being appropriated by the financial industries in the form of interest payments, fees, penalties, and service charges. Still, given the fact that interest payments alone takes up between 15-17% of household income,[1] a figure that does not include student loans, and that penalty fees on bank and credit card accounts can often double the amount one would otherwise pay, it would not be at all surprising if at least one dollar out of every five an American earns over the course of her lifetime is now likely to end up in Wall Street’s coffers in one way or another. The percentage may well be approaching the amount the average American will pay in taxes. In fact, for the least affluent Americans, it has probably long since overtaken it.

And yet Graeber explains why these insights may not quickly or neatly lead to recognizable political action or electoral politics. In fact, he doesn't expect the movement to move toward electoral politics at all. Many of its young activists were inspired by the Obama campaign, and when that movement turned out not to be a movement, by many of their standards, they felt burned and aren't likely to return to the process. "Clearly, if progressive change was not possible through electoral means in 2008, it simply isn’t going to be possible at all. And that is exactly what very large numbers of Americans appear to have concluded," Graeber writes. I hope he's wrong, but he knows more about this than I do. Read the whole thing.

I do know this: Even without demands, OWS has completely changed the conversation in this country. We are talking about much more interesting things than we were on Sept. 16. Conversations about staggering income inequality and "the top 1 percent" were mostly limited to liberal bloggers and labor economists; cable talk shows were obsessing over the debt-ceiling battle and the deficit "crisis" and President Obama's latest poll numbers. (Chris Bowers shows that the cable conversation has changed dramatically.)

The president is talking a more populist line, and so are most Democrats. I can live with uncertainty about what it all means for now.

Meanwhile, Greg Sargent reports that despite the best efforts of the GOP, two polls show that working-class whites support OWS. In the National Journal poll, 54 percent of non-college-educated whites agree with the protesters; only 42 percent disagree. A Time poll shows that 51 percent of non-college-educated whites agree. That's more bad news for Pat Buchanan.

Here's my conversation with Chris Matthews and Robert Reich on "Hardball" Wednesday: