Libya is now in the hands of the rebels, but deep division remain 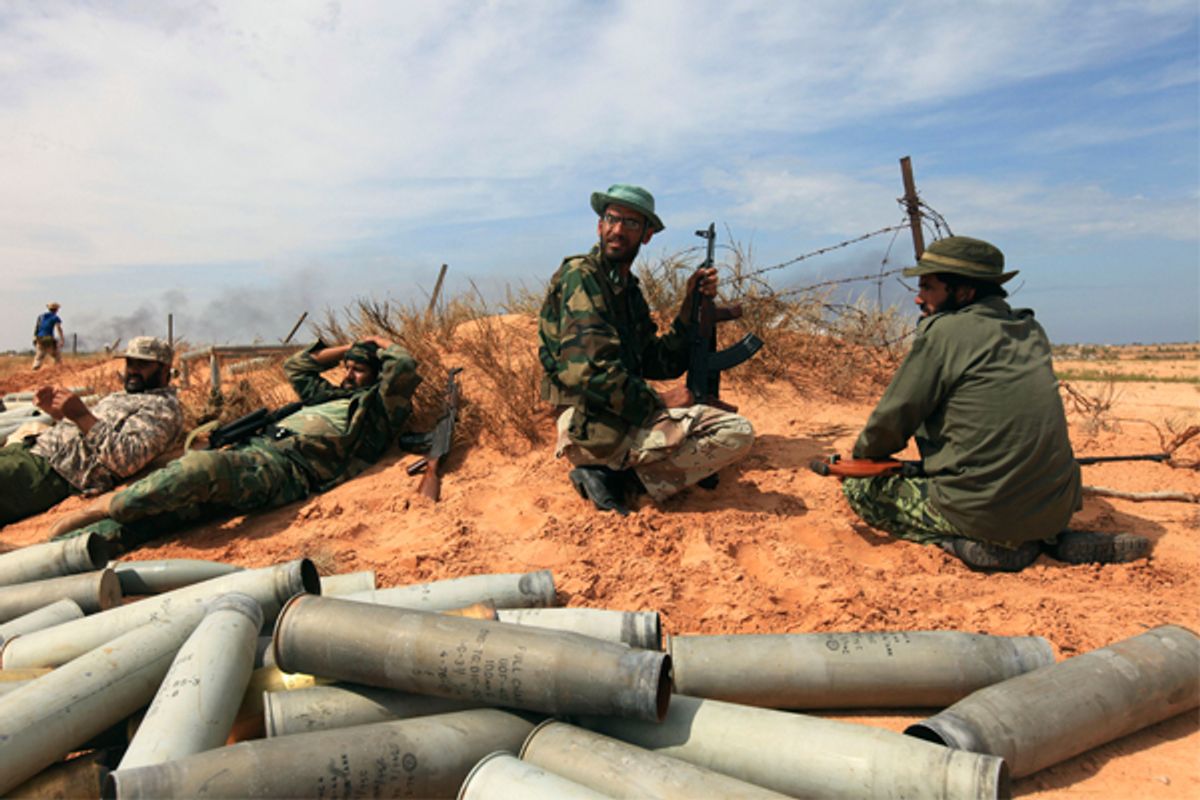 As Libyans, and much of the Arab world, celebrate the capture and killing of toppled Libyan leader Muammar Gaddafi, the rebels that turned the protest movement into an armed uprising are coalescing around the capital and beginning to make the first moves toward a new government.

But while the revolution is at its end, deep divisions remain in the country, and fears of civil war are ever present. The Libyan rebels themselves are far from unified and have been jockeying for power amongst themselves for months. And, now that the focus of the rebels' firepower — Gaddafi — is gone, many Libyans worry that the real divisions within the rebel faction will begin to emerge in more serious, and possibly violent, ways.

Hassan Sadaw, a Libya English teacher from the western rebel stronghold of Misrata, told GlobalPost's James Foley earlier this month that he worried that divisions among the rebels would eventually erupt and that the two sides would turn their weapons on each other.

“Maybe we’ll have a civil war. We are afraid, if we continue to talk about his, maybe there will be a political vacuum,” he told Foley.

Although Libya is a country that has been long divided along tribal and ethnic lines, only effectively kept united by the brutal authoritarian hand of Gaddafi, the rebel divisions, which run between east and west, pose the most pressing threat to the country's future.

Eastern rebels come from the former revolutionary capital of Benghazi and other cities nearby. They claim to be the real heroes of the conflict because it was in Benghazi that protests first took hold in February and it is where Gaddafi security forces first opened fire. The western rebels, however, based in the city of Misrata, were involved in the most serious fighting of the conflict and successfully fought back against a bloody loyalist siege in their city in March and April.

It was also the western Misrata rebels that first entered Tripoli, the country's capital..

The two sides had been openly competing to be the first ones to take down Sirte, Gaddafi's hometown and to capture or kill Gaddafi himself. In a rebel-controlled neighborhood of Sirte earlier this month, for example, a seasoned Misrata fighter sidled up to a newly-arrived rebel from Benghazi and offered his ostensible ally a few choice words: “You’re late.”

Although playful at times, the competition could have serious and potentially violent repercussions as the rebels now try to form a centralized interim government and organize elections. The Libyan conflict may be far from over.

Sadaw, from Misrata, continued in worrying fashion: “We are afraid of Benghazi people. They will try to take everything — oil, power, everything.”