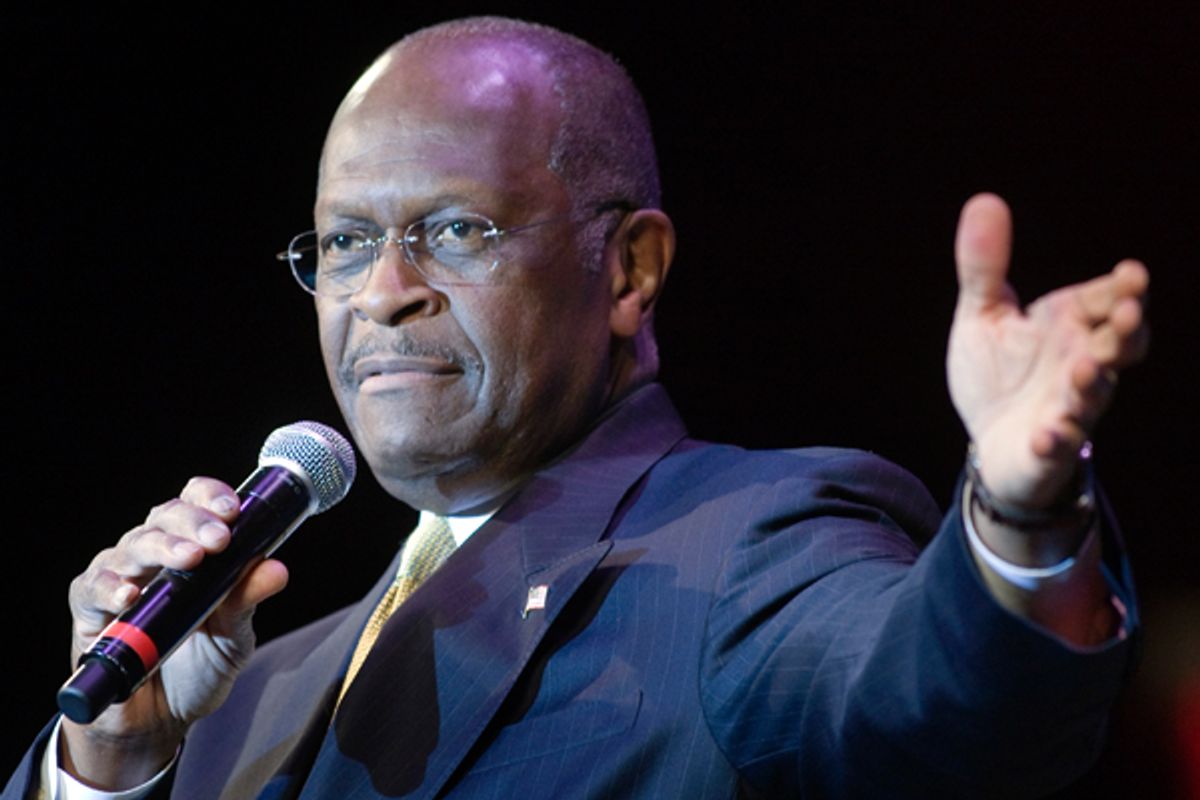 This is a perfect example of why most political observers believe Herman Cain's run at the top of Republican presidential polls will be short-lived. He sat down for an interview with CNN's Piers Morgan last night, and the subject of abortion came up. Cain, as any candidate aspiring to unite the GOP's conservative base would, has been calling himself pro-life throughout the campaign, and he told Morgan that he believes life begins at conception. But then Morgan introduced a hypothetical question about Cain's daughter being raped, and Cain suddenly began sounding like a NARAL employee. Here's the complete transcript of what happened:

CAIN: I believe that life begins at conception. And abortion under no circumstances. And here's why --

MORGAN: Because many of your fellow candidates -- some of them qualify that.

CAIN: They qualify but --

MORGAN: Are you honestly saying -- again, it's a tricky question, I know.

MORGAN: That's what it comes down to.

CAIN: No, it comes down to it's not the government's role or anybody else's role to make that decision. Secondly, if you look at the statistical incidents, you're not talking about that big a number. So what I'm saying is it ultimately gets down to a choice that that family or that mother has to make.

Not me as president, not some politician, not a bureaucrat. It gets down to that family. And whatever they decide, they decide. I shouldn't have to tell them what decision to make for such a sensitive issue.

MORGAN: By expressing the view that you expressed, you are effectively -- you might be president. You can't hide behind now the mask, if you don't mind me saying, of being the pizza guy. You might be the president of United States of America. So your views on these things become exponentially massively more important. They become a directive to the nation.

CAIN: No they don't. I can have an opinion on an issue without it being a directive on the nation. The government shouldn't be trying to tell people everything to do, especially when it comes to social decisions that they need to make.

MORGAN: -- from the normal politics.

Now, I'm guessing that Cain was talking only about the specific type of situation Morgan brought up -- abortion in the case of rape or incest -- and that he thought this was clear. But it's not, which is why a flood of news stories today have suggested that Cain may actually be pro-choice. And it provided a perfect opening for Rick Santorum, who is desperately trying to puncture the Cain bubble and win over his conservative supporters, to go on the attack:

"Herman Cain said that he believes life begins at conception, but that it's up to the individual to decide whether or not to terminate that life," Santorum, the former Pennsylvania senator, said in a statement. "And I find it gravely troubling that Herman believes it's a life, but that he doesn't consider it a life worth fighting for."

"You cannot be both personally against abortion while condoning it – you can't have it both ways. We must defend the defenseless, period," Santorum concluded.

Cain tried to clarify a while ago, sending out a tweet that read: "I'm 100% pro-life. End of story."

Supporting an exception for rape and incest probably won't, by itself, hurt Cain with social conservatives (although there are pro-lifers who believe adamantly that abortion should only be allowed if the mother's life is in danger, and that even pregnancies caused by rape should be carried to term). But by adopting such a forceful, libertarian tone in making the case for a rape/incest exception, Cain may raise fears among social conservatives that he isn't sufficiently committed to their cause. In a way, the incident calls to mind Steve Forbes' frank admission during his 1996 campaign that while he opposed abortion, he didn't think that it would go away even if it was outlawed, a statement that cut into his appeal to antiabortion Republicans at a time when he was surging in the polls.