Reports spread that the former dictator might have died this morning in his hometown, Sirte. 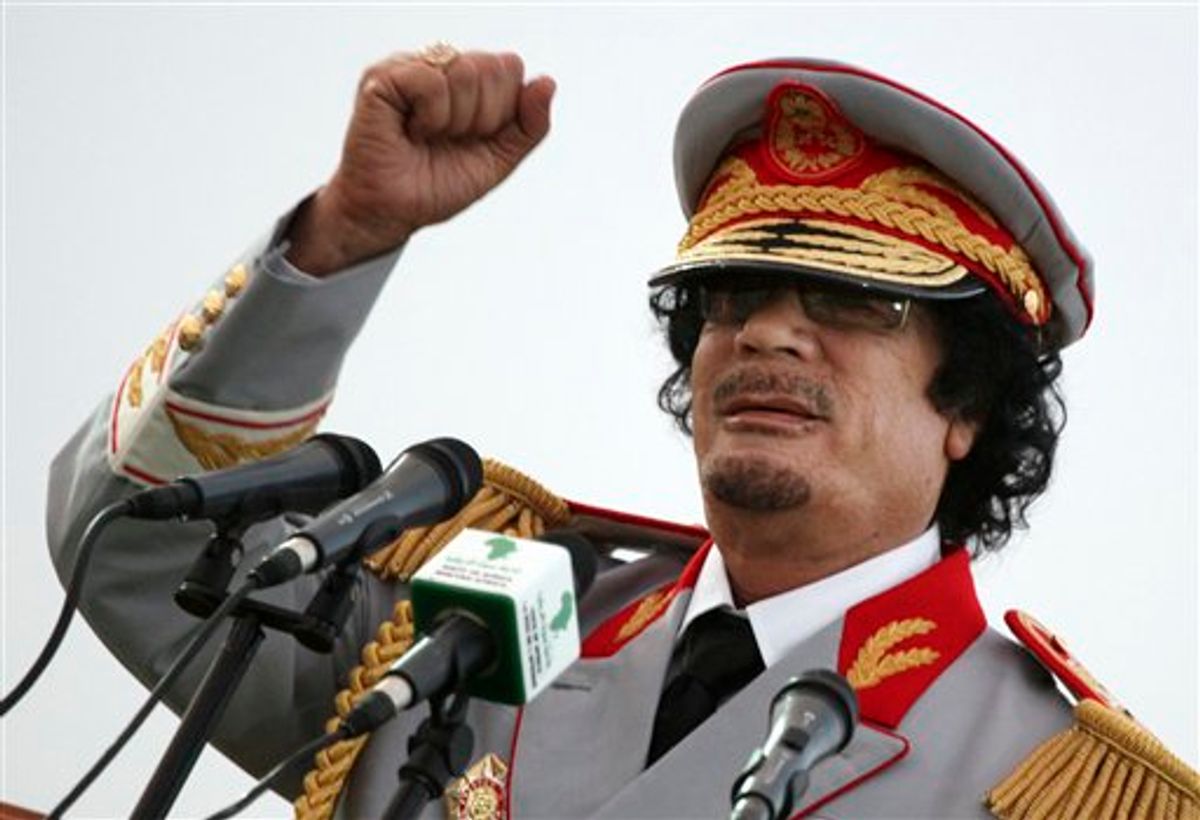 In this Saturday, June 12, 2010 file photo, Libyan leader Moammar Gadhafi talks during a ceremony to mark the 40th anniversary of the evacuation of the American military bases in the country, in Tripoli, Libya. (AP Photo/ Abdel Magid Al Fergany, File)
--

The head of the government did not immediately not confirm Gadhafi’s capture or death. The transitional government called a news conference in Tripoli, where Prime Minister Mustafa Abdul-Jalil could confirm the death.

Information Minister Mahmoud Shammam said he was told that Gadhafi was dead from fighters who said they saw the body. He said he expects the prime minister to confirm the death soon, noting that past reports emerged before they could confirm them 100 percent.

“Our people in Sirte saw the body … Mustafa Abdul-Jalil will confirm it soon,” Shammam told The Associated Press. “Revolutionaries say Gadhafi was in a convoy and that they attacked the convoy.”

Other military officials in the government also said Gadhafi was dead and several revolutionary groups fighting in Sirte also said he was either killed or captured.

The transitional government called a news conference in Tripoli, where Abdul-Jalil could confirm the death.

Celebratory gunfire and cries of “Allahu Akbar” or “God is Great” rang out across Tripoli as the reports spread. Cars honked their horns and people hugged each other. In Sirte, the ecstatic former rebels celebrated the city’s fall after weeks of bloody siege by firing endless rounds into the sky, pumping their guns, knives and even a meat cleaver in the air and singing the national anthem.

Despite the fall of Tripoli on Aug. 21, Gadhafi loyalists mounted fierce resistance in several areas, including Sirte, preventing Libya’s new leaders from declaring full victory in the eight-month civil war. Earlier this week, revolutionary fighters gained control of one stronghold, Bani Walid, and by Tuesday said they had squeezed Gadhafi’s forces in Sirte into a residential area of about 700 square yards but were still coming under heavy fire from surrounding buildings.

Reporters at the scene watched as the final assault began around 8 a.m. and ended about 90 minutes later. Just before the battle, about five carloads of Gadhafi loyalists tried to flee the enclave down the coastal highway that leads out of the city. But they were met by gunfire from the revolutionaries, who killed at least 20 of them.

Col. Roland Lavoie, spokesman for NATO’s operational headquarters in Naples, Italy, said the alliance’s aircraft Thursday morning struck two vehicles of pro-Gadhafi forces “which were part of a larger group maneuvering in the vicinity of Sirte.”

But NATO officials, speaking on condition of anonymity in accordance to alliance rules, said the alliance also could not independently confirm whether Gadhafi was killed or captured.

After the battle, revolutionaries began searching homes and buildings looking for any hiding Gadhafi fighters. At least 16 were captured, along with cases of ammunition and trucks loaded with weapons. Reporters saw revolutionaries beating captured Gadhafi men in the back of trucks and officers intervening to stop them.

In an illustration of how difficult and slow the fighting for Sirte was, it took the anti-Gadhafi fighters two days to capture a single residential building.

In the central quarter where Thursday’s final battle took place, the fighters looking like the same ragtag force that started the uprising eight months ago jumped up and down with joy and flashed V-for-victory signs. Some burned the green Gadhafi flag, then stepped on it with their boots.

They chanted “Allah akbar,” or “God is great” in Arabic, while one fighter climbed a traffic light pole to unfurl the revolution’s flag, which he first kissed. Discarded military uniforms of Gadhafi’s fighters littered the streets. One revolutionary fighter waved a silver trophy in the air while another held up a box of firecrackers, then set them off.

“Our forces control the last neighborhood in Sirte,” Hassan Draoua, a member of Libya’s interim National Transitional Council, told The Associated Press in Tripoli. “The city has been liberated.”

The Misrata Military Council, one of the command groups, said its fighters captured Gadhafi. Another commander, Abdel-Basit Haroun, says Gadhafi was killed when the airstrike hit the fleeing convoy.

In a sign of the conflicting versions, military spokesman Col. Ahmed Bani in Tripoli told Al-Jazeera TV, “I can assure everyone in Libya that Gadhafi has been killed for sure and I’m definitely sure and I reassure everyone that this story has ended and this book has closed.”

But rather than a strike on the convoy, he said a wounded Gadhafi “tried to resist (revolutionary forces) so they took him down.”

The spokesman for Libya’s transitional government, Jalal al-Gallal, and another military spokesman Abdul-Rahman Busin said the reports have not been confirmed.

The caution in making a definitive announcement came because past reports of Gadhafi family deaths or captures have later proven incorrect, even after they were announced by officials, because of the confusion among the revolutionary forces’ ranks and the multiple bodies involved in commanding their fighters.

Gadhafi loyalists who have escaped could still continue the fight and attempt to organize an insurgency using the vast amount of weapons Gadhafi was believed to have stored in hideouts in the remote southern desert.

Unlike Iraq’s Saddam Hussein, Gadhafi had no well-organized political party that could form the basis of an insurgent leadership. However, regional and ethnic differences have already appeared among the ranks of the revolutionaries, possibly laying the foundation for civil strife.

Gadhafi has issued several audio recordings trying to rally supporters. Libyan officials have said they believe he’s hiding somewhere in the vast southwestern desert near the borders with Niger and Algeria.

From The Wires Libya