The former Libyan strongman is dead at 69. We track the newest developments and reactions 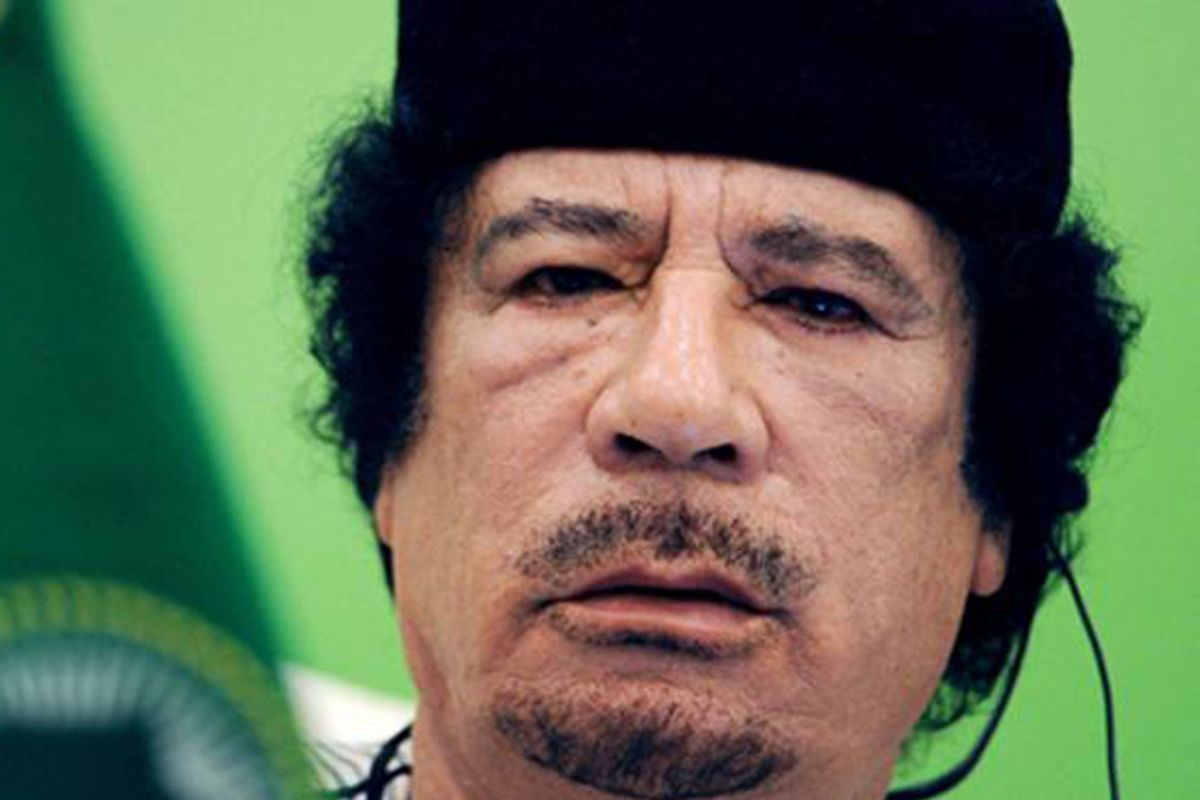 [Update - 3:00 p.m. ET]: Watch President Obama's statement on the death of Moammar Gadhafi below. (Remarks begin at around 1:30)

[Update - 2:30 p.m. ET]: We'll post video of President Obama's address as soon as it becomes available. In the mean time, here are some more highlights:

Today the government of Libya announced the death of Moammar Gadhafi. This marks the end of a long and painful chapter for the people of libya -- who now have an opportunity to determine their own destiny in a new and democratic libya.

[Gadhafi], one way or another is gone, whether he's alive or dead, he's gone. The people of Libya have gotten rid of a dictator of for years who I personally knew -- this is one tough, not so nice guy.

[Update - 1:40 p.m. ET]: Moammar Gadhafi's body will be buried in a "humble" manner, and in compliance with Muslim traditions, according to the Libyan transitional government's ambassador to the United States, Ali Aujali, in an interview with CNN.

Aujali also expressed gratitude toward the U.S. for its role in the March intervention, saying: "Thank you very much America. You took the right decision."

[Update - 1:30 p.m. ET]: White House officials acknowledge that "they have received reports through diplomatic channels of [Gadhafi's] death 'and have confidence in this reporting,'" according to Sam Stein of the Huffington Post.

[Update - 1:25 p.m. ET]: CNNMoney analyzes the impact Gadhafi's death might have on Libya's all-important oil trade -- which ground to a halt as the country descended into conflict:

Libya could probably double its current production relatively quickly, which at current prices might fetch $80 million or so a day on the open market. But a return to its prewar output of 1.6 million barrels a day, which could raise hundreds of millions a day, is slow, complicated work.

Extensive repairs on old damaged oil fields will likely be required, and the challenge of Libya's new fractured leadership agreeing on how to divvy up the oil wealth remains daunting.

[Update - 1:20 p.m. ET]: More information on the cause of Gadhafi's death, by way of the Libyan doctor who travelled with the the body (via the AP):

Abdel-Jalil Abdel-Aziz, a doctor who was part of the medical team that accompanied the body in the ambulance and examined it, said Gadhafi died from two bullet wounds, to the head and chest.

"You can't imagine my happiness today. I can't describe my happiness," he told The Associated Press. "The tyranny is gone. Now the Libyan people can rest."

[Update - 1:15 p.m. ET]: A representative of the Libyan transitional government is saying that Seif al-Islam -- Gadhafi's son and, at one time, heir apparent -- is "wounded, in hopsital," according to the AP. Earlier reports indicate that another of Gadhafi's sons, Mutassim, was killed this morning when rebels stormed the regime's last remaining stronghold, in Sirte.

[Update - 1:08 p.m. ET]: Senate Minority Leader Mitch McConnell says that Gadhafi's death "clears the way for the Transitional National Council in Libya to begin to put together a representative government," according to CNN.

[Update - 1:00 p.m. ET]: The New York Times has published its obituary of Gadhafi, charting the evolution of the dictator's "erratic" and "provocative" persona over the years:

Colonel Qaddafi was a 27-year-old junior officer when he led the bloodless coup that deposed Libya’s monarch in 1969. Soon afterward, he began styling himself a desert nomad philosopher. He received dignitaries in his signature sprawling white tent, which he erected wherever he went: Rome, Paris and, after much controversy, New York, on a Westchester estate in 2009. Inside, its quilted walls might be printed with traditional motifs like palm trees and camels or embroidered with his own sayings.

Colonel Qaddafi declared that his political system of permanent revolution would sweep away capitalism and socialism. But he hedged his bets by financing and arming a cornucopia of violent organizations, including the Irish Republican Army and African guerrilla groups, and he became an international pariah after his government was linked to deadly terrorist attacks, particularly the 1988 bombing of a Pan Am jet over Lockerbie, Scotland, which killed 270 people.

[Update - 12:40 p.m. ET]: In the aftermath of Gadhafi's death, many are wondering what will become of Libya. Global Post's Peter Gelling warns that more bloodshed might be in the offing:

[W]hile the revolution is at its end, deep divisions remain in the country, and fears of civil war are ever present. The Libyan rebels themselves are far from unified and have been jockeying for power amongst themselves for months. And, now that the focus of the rebels' firepower — Gaddafi — is gone, many Libyans worry that the real divisions within the rebel faction will begin to emerge in more serious, and possibly violent, ways.

[Update - 12:35 p.m. ET]: German Chancellor Angela Merkel has responded to the Libyan dictator's demise, saying "A bloody war which Gadhafi waged against his own people now comes to a close. The way is finally clear for a new and peaceful political beginning."

French President Nicolas Sarkozy, meanwhile, "called Moammar Gadhafi's 'disappearance' Thursday a 'major step' in the struggle by Libyans to 'free themselves from dictatorship and violence,'" according to CNN.

[Update - 12:30 p.m. ET]: A video posted to YouTube appears to show Moammar Gadhafi, bloodied but still breathing, in the moments after his capture by Libyan rebels. (WARNING: GRAPHIC FOOTAGE)

[Update - 12:20 p.m. ET]: The AP is reporting that a "Libyan doctor who traveled with Gadhafi's body says he died of 2 bullet wounds to the chest."

[Update - 12:07 p.m. ET]: The heir to the Libyan throne -- that is to say, Mohammed El Senussi, senior member of the deposed Libyan monarchy, which was overthrown 42 years ago when Gadhafi took power -- has responded favorably to news of the dictator's death.

The flag of freedom is now flying in Sirte and across Libya on this historic day. People throughout Libya took up arms just eight months ago and in that short time they have been united in their resolve to rid the country of evil …

The new Libya must be organised under the rule of law and there is no greater time than right now to demonstrate that commitment by ensuring there are no acts of vengeance against Gaddafi's supporters and that justice is dealt with by the courts.

Today begins a new chapter in our history. I look forward now with confidence that the people of Libya will build a future we can all be proud of. Now is the time to put freedom and the sanctity of life at the heart of our society and to put the era of terror and oppression behind us.

[Update - 11:55 a.m. ET]: Arizona Senator John McCain has said of Gadhafi's death, "I think it's a great day," in an interview with CNN's Wolf Blitzer. McCain said President Obama "deserves credit" for his handling of the Libyan intervention.

The senator also told told Blitzer that the new Libyan government would consider reimbursing the United States for some of the costs associated with the intervention:

McCain said that when he and other lawmakers visited Tripoli to speak with anti-Gadhafi officials after Gadhafi's overthrow, those officials said that they would seriously consider reimbursing the United States for its efforts. The amount that the Libyans said they would try to give back to the United States is approximately $1 billion, McCain told CNN's Wolf Blitzer.

From a U.N. press release:

Combatants on all sides must lay down their arms in peace. This is the time for healing and rebuilding, for generosity of spirit – not for revenge.

The high hopes sustained through the long days of revolution and conflict must translate into opportunities and justice for all.

In the coming days, we will witness scenes of celebration, as well as grief for those who lost so much. Yet let us recognize, immediately, that this is only the end of the beginning. The road ahead for Libya and its people will be difficult and full of challenges.

[Update - 11:35 a.m. ET]: Relatives of those killed in the 1988 bombing of Pan Am Flight 103 (the "Lockerbie bombing") expressed relief at news that Gadhafi was captured or killed this morning, according to The Daily Beast:

Brian Flynn, who lost his brother J.P. Flynn on the December 21, 1988 flight said, “For 20 plus years we've been saying that Gaddafi is going to continue to haunt the world and needs to be brought to justice. If it is true that Gaddafi is dead or captured we are thrilled for the Libyan people and we have a feeling that the long trail to justice is coming to an end."

A former Libyan justice minister stated in February that Gadhafi was personally responsible for the order to orchestrate the attack, which killed 270 people.

[Update - 11:25 a.m. ET]: Global Post has published details from an interview with Imad Moustaf, a rebel fighter who claims to have seen Gadhafi's death:

Moustaf said Gadhafi had been shot in the head and close to the heart on the outskirts of the western roundabout of Sirte, where he was hiding in a hole surrounded by bodyguards. Moustaf claimed to have been in the ambulance with Gadhafi when he died. The BBC, who spoke to another Libyan rebel, also reported that Gadhafi had been hiding in a hole. The BBC also reported that Gadhafi yelled, “Don’t shoot,” before he was killed.

[Update - 11:10 a.m. ET]: CBS has published a video of Secretary of State Hillary Clinton receiving early word about Gadhafi's death earlier this morning, via her BlackBerry. Clinton is in Kabul, Afghanistan, and was preparing for a sit down interview when she read the news.

Gadhafi's son, Mutassim, and his chief of intelligence, Abdullah al-Senussi, have been killed, according to Anees al-Sharif, spokesman for AbdelHakim Belhajj of the Tripoli military council.

It also seems likely that NATO will end its mission in Libya in the coming days:

EARLIER: Speculation mounted this morning that deposed Libyan dictator Moammar Gadhafi was killed in a NATO airstrike on his hometown, Sirte, in the early hours of the day. Now, the Libyan Prime Minister Mahmoud Jibril has confirmed Gadhafi's death.

Even as the State Department  works to corroborate the reports -- one official says it "looks like he's been killed" -- consensus mounts that the Libyan strongman has, in fact, died. Adding to the certainty is a cell-phone video, aired by Al Jazeera, supposedly showing Gadhafi's body, lying limp on the ground, surrounded by people. (WARNING: Viewers might find the video disturbing):

From the AP's obituary:

During nearly 42 years in power in Libya, Moammar Gadhafi was one of the world's most eccentric dictators, so mercurial that he was both condemned and courted by the West, while he brutally warped his country with his idiosyncratic vision of autocratic rule until he was finally toppled by his own people.

The modern Arab world's longest-ruling figure, Libya's "Brother Leader" displayed striking contrasts. He was a sponsor of terrorism whose regime was blamed for blowing up two passenger jets, who then helped the U.S. in the war on terror. He was an Arab nationalist who mocked Arab rulers. In the crowning paradox, he preached a "revolutionary" utopia of people power but ran a one-man dictatorship that fueled the revolution against him.