The movement's core complaint about Wall Street isn't left-wing fringe; it's shared by most Americans 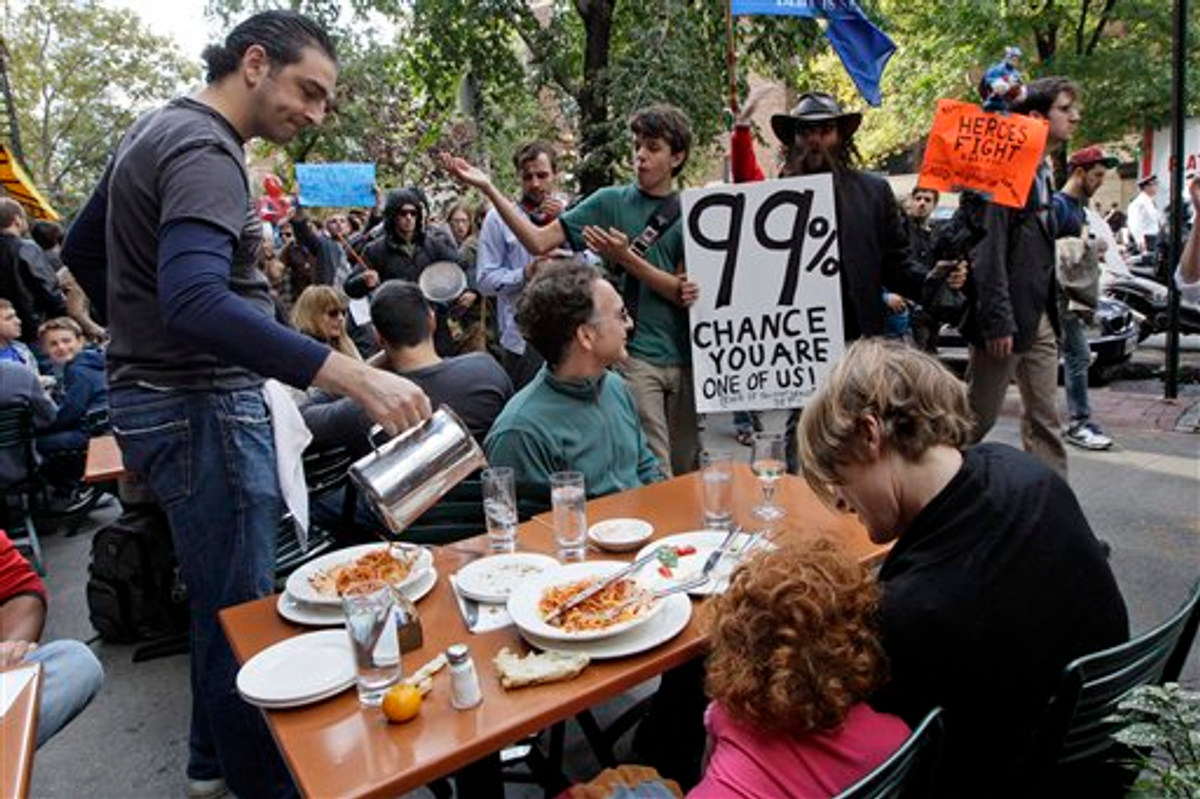 NEW YORK -- The officer, a burly Queens resident, regarded the scene before him with some amusement. "You know, in 20 years, most of these kids will be Republicans."

NYPD policy forbids sergeants from holding forth on sensitive political matters or otherwise commenting in the media.

But something's happening here. Maybe it was the metronome of the protesters' constant drumming, the boredom of this duty on a warm fall night -- or the promise that his comments would remain anonymous.

Whatever the case, the sergeant felt like speaking his mind.

"They're not bad kids, just filthy and misguided a bit," he said, as he and dozens of other cops stood vigil over the Occupy Wall Street encampment one recent evening at Zuccotti Park.

"You know, there are some real troublemakers in there. Guys getting high, guys who just want to break bottles and bait the police," he said.

"I hope they don't instigate something, because as you can imagine some people would love an excuse to go clear this out. Because most of them are gentle kids and they have a point about things -- well, they have too many points. But I'm not surprised people are paying attention."

Journalists love a moment like this. Man bites dog. Hard-bitten NYPD sergeant sympathize with the hippies -- you know the script.

But the sarge had a point: People, even those who might normally write off the movement at Zuccotti Park as a left-wing fringe or a bunch of rent-a-marchers, see something different this time.

The core complaint in the disorganized chorus of other issues -- that Wall Street banks nearly destroyed the American economy and then fleeced its taxpayers on the way out the door -- is neither divisive nor partisan.

It is, in the mind of a majority of the American public at least, simply true.

A new survey by National Journal found that about 59 percent of adults agree with the protesters. Only 31 percent disagree.

"This is a major implicit complaint of the OWS protests and it should absolutely strike a nerve with Tea Partiers, many of whom were talking about some of the same things when they burst onto the scene a few years ago," wrote Matt Taibbi, a contributing editor for Rolling Stone.

"This thing is bigger than one or two or a few people, and it isn't part of the same old story."

This may be why, unlike countless other movements since the golden days of American civil disobedience in the 1960s, Occupy Wall Street appears to have legs.

It explains why average New Yorkers keep showing up with food donations and tarps; why other "Occupy" sit-ins and marches have sprouted in cities from Los Angeles to Athens; why people like Robert Halper, a former vice chairman of the New York Mercantile Exchange just down the street, volunteer some of their time to help.

Most of all, it explains why New York's police have been kept at bay in spite of a major who launched his career at an investment bank, Salomon Brothers, and city laws on public gatherings, security and sanitation that could easily be used to force the protesters to disperse.

Think of the important movements in the United States since 1980 that drew significant support from mass demonstrations.

In the Reagan era, large protests organized by the anti-nuclear movement demanded a "nuclear freeze" on the U.S. and Soviet arsenals, and a shutdown of America's nuclear power plants.

These were, at best, movements that represented only a portion of American public opinion, and as a result, neither got very far.

It was a very different set of dynamics -- the collapse of the USSR -- that ultimately tamed the nuclear arms race. Meanwhile, high operating costs and difficulties finding communities willing to host nuclear power plans trimmed the industry's sails.

In contrast, mass protests of U.S. Pershing nuclear artillery missiles in Europe organized by German, British and other green and peace movements forced NATO governments to seek negotiations and ultimately withdraw them. The difference: their presence on European soil united a majority in opposition.

By the mid-1980s and into the 1990s, social issues dominated mass demonstrations. Pro-choice and anti-abortion marchers descended on Washington, determined to represent their own views. Gay rights and HIV/AIDS demonstrations spawned Christian-funded counter rallies. Neither side spoke to the country as much as they spoke at it.

Even the anti-war protests that accompanied the invasion of Iraq united only a minority of Americans. More than 50 percent of the country had become convinced that Saddam Hussein had something to do with 9/11.

Those inside the Occupy movement claim inspiration from the great, successful civil-disobedience campaigns of the past. Signs quoting Gandhi and Martin Luther King Jr. abound in the park.

At the movement's media table, the closest thing to a leadership body, constant references are made to "the American Spring," an extension of the Tunisian, Egyptian and other uprisings aimed at toppling corrupt autocracies.

The main similarity between the Arab Spring and what's going on in Zuccotti Park is really quite simple: in both cases, a majority of citizens waited anxiously for someone, anyone to stand up and say, "The Emperor has no clothes!"

With regard to the Wall Street bailouts, neither President Obama nor the leadership of the GOP, authors of the TARP bailout after all, have made a convincing show of prosecuting those responsible, and helping those most affected by the crash.

The Tea Party certainly has tackled the issue, but the white, anti-tax anger in its DNA drowned out its anti-Wall Street message.

In the end, after all, Wall Street and the Tea Party want the same thing: lower taxes.

That left a vacuum to be filled -- or occupied, as the case may be.