Sex at OWS: "You occupy my heart" 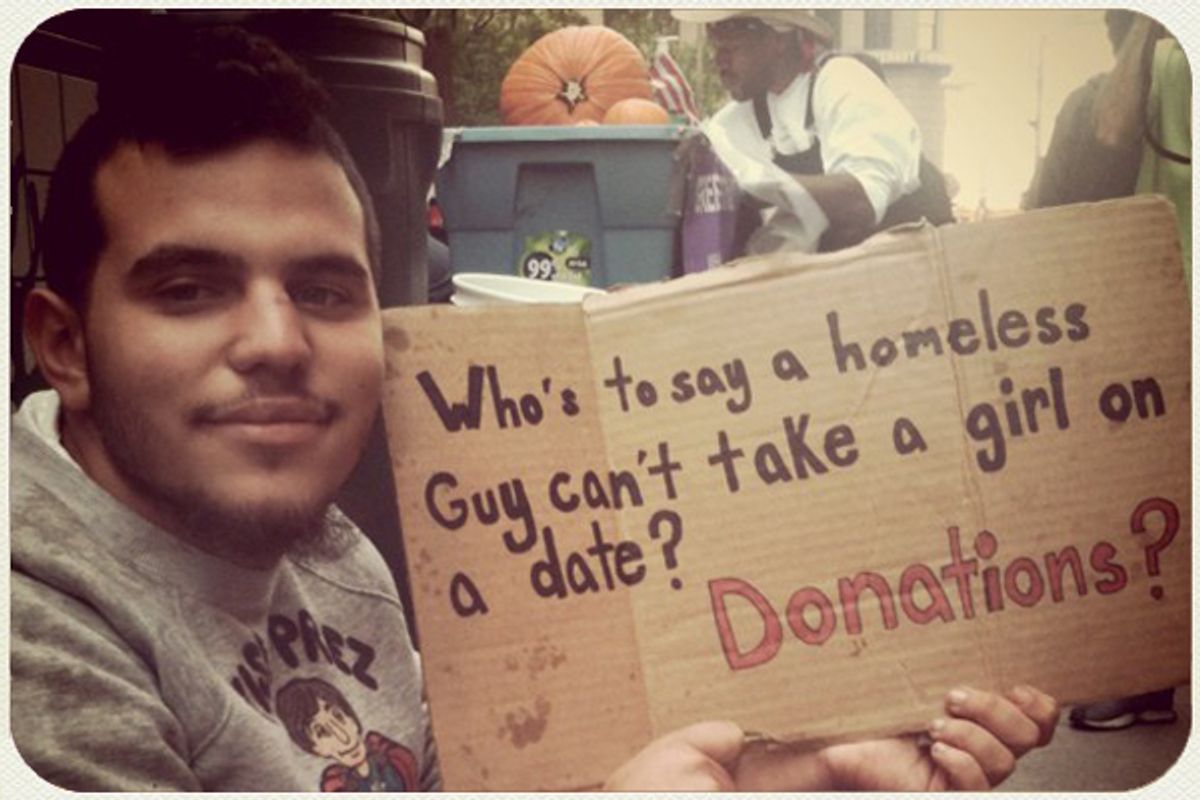 Alexander is sitting on the edge of Zuccotti Park holding a cardboard sign reading, "Who's to say a homeless guy can't take a girl on a date? Donations?" The 19-year-old's arms are covered in flaky scabs and the bridge of his nose bears a scar, presumably from a fight, but his gutter-punk look is softened by beautiful green eyes and a round, warm face. I sit next to him on the sidewalk, amid the chaos of Occupy Wall Street, and ask whether the wad of dollar bills in his collection cup is really going toward a date. "Definitely," he smiles. "But my idea of a date is dropping 2C-B" – a psychedelic drug, he explains, when I have to ask – "and going on an adventure around the city."

"Sex doesn't happen here," says John, a 22-year-old college graduate from Virginia Beach who has slept in the square for a couple of days now. "There are a lot of people in a very tight space. It'd be really hard to do." A handful of other protesters in their 20s tell me that they haven't seen any of the apparently apocryphal "lawn sex" or condoms littering the ground. Indeed, Zuccotti Park is by far the cleanest sliver of the city that I've seen.

Clearly, there's a minority that feels more inspired by all the cute activists than by the movement itself -- the blog Hot Chicks of Occupy Wall Street is just one obvious manifestation of that. With so many young people with shared passions gathered in a city square, it's inevitable that sparks would fly. It's like college all over again -- at least for the ones who aren't still in school, and many are. Missed Connections regularly pop up on Craigslist – most famously, one from a man looking for the "cute anarchist" he was arrested with while protesting on the Brooklyn Bridge. He wrote, "You made fun of my shoes' tongues falling out because they’d confiscated our shoelaces!" For those of us with parents who joined the antiwar movement in the '60s, these sound like familiar love stories. The protest has already inspired at least one marriage proposal, in which a man used the human microphone system to pop the question, "Will you occupy my life?"

Contrary to the pornographic imagery conjured by some conservatives, the movement's romantic connections are awfully sweet. "I have a crush," a long-haired 20-year-old named Joshua, who is reading tarot cards for change, told me. When I inquired further, he started to blush and simply put a painted fingernail to his lips to shush me. Spirit, an 18-year-old student sitting by a pile of sleeping punks with face tattoos and mangy pups, said she knew of a couple who met here, fell in love and are now traveling the country together. "You put enough young passionate people together, there will be some love connections," said Beccah, 25. "If you walk away with your future husband, great. My parents bonded protesting tuition hikes at Boston University."

It isn't just romantic connections that are being made, though. There are also intense conversations happening between men and women about gender and sex. I joined a powwow of a dozen 20-somethings sitting on scraps of cardboard and discussing things like "white male privilege," sexual consent and gendered language. We went around the circle introducing ourselves by our name and preferred gender pronoun. "My name's Jordan, I go by 'they,'" said one participant. Another "male-bodied" person with orange dreadlocks and purple nail polish also identified as "they" -- but the rest of the group stuck with "he" and "she." When someone said something others agreed with -- say, about how sexism and the gender binary perpetuate "our corrupt social system" -- they would do a variation of fluttery "jazz hands" instead of clapping.

It would be an understatement to say that those sexualizing the protest, like the guy behind Hot Chicks of Occupy Wall Street, are unpopular among Zuccotti Park campers. One young woman said of the blog's creator, "I hope he doesn't ever come back here because we've done such a good job so far of being nonviolent" -- the none-too-subtle implication being that he would get his ass kicked. Although Beccah from earlier said, "If it takes titties to get people here, who am I to argue?"

Initially, 19-year-old Alexander was drawn to the protest because of the free food and blankets, but the "sexy," "passionate" young women kept him around -- along with make-out sessions in phone booths. Eventually, though, he actually got behind the movement and started writing poetry about the cause. He says, "That's the only reason I'm still here."