Updated: Hyped like subprime mortgages, school loans now run to hundreds of billions with no relief in sight 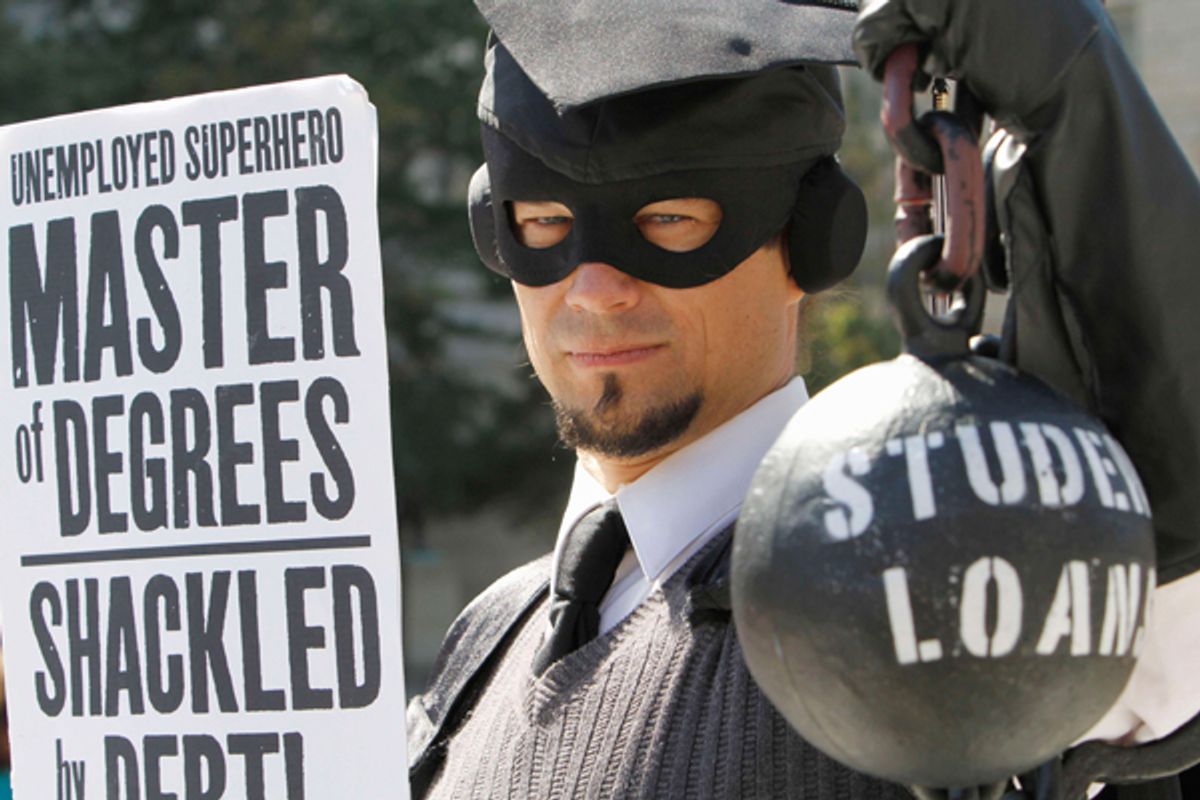 [UPDATED] USA Today says that at some point this year, student loan debt will exceed $1 trillion, surpassing even credit card debt. Felix Salmon says the number is closer to $550 billion. Either way total student loan debt is rising as other debts have tailed off. Delinquency has increased, too, since the height of the financial crisis.

It's a huge mess.

Some people have noticed that "student loan debt" comes up a lot among the Wall Street Occupiers and the members of the 99 percent movement. Often, older people, who either attended school when tuition was reasonable, or who didn't attend college at all in an era when a high school diploma was enough of a qualification for a stable, middle-class career, tend to think this is all the entitled whining of spoiled kids. They don't understand that these kids accepted a home mortgage worth of debt before they ever even had a regular income, based on phony promises, and that the debt is inescapable, regardless of life circumstances or ability to pay.

Thanks to a number of congressional actions, debtors cannot discharge student loans through bankruptcy. The government is shielded from the risk, and creditors are licensed to collect by almost any means they deem necessary, giving no one in charge any real incentive (beyond basic human decency) to fix the situation.

In other words, this is unprecedentedly awful for an entire generation of young people just entering adulthood.

"It's going to create a generation of wage slavery," says Nick Pardini, a Villanova University graduate student in finance who has warned on a blog for investors that student loans are the next credit bubble — with borrowers, rather than lenders, as the losers.

Even if by some miracle our unemployed and underemployed debt-laden graduates all win decent jobs tomorrow, the money they make will go into paying off these now-delinquent loans instead of anything productive for the economy as a whole. Banks will continue to see massive profits, in other words.

The impossibility of escaping student loan debt is why an industry sprang up to foist useless, overpriced degrees on vulnerable people. It's a scam, but a profitable one, and respectable enough for major establishment players to feel comfortable making a killing on it.

The crooks are shameless. The Fiscal Times asked a bunch of predictable brain-dead airport bookstore luminaries (Dr. Oz! Mort Zuckerman!) to share one idea to "solve our fiscal crisis." Here's my favorite entry:

This wisdom comes from Lally Weymouth, "Senior Associate Editor" at the Washington Post and also part owner of the Washington Post Co., owner of for-profit college company Kaplan, the exploitative education corporation that subsidizes the money-losing newspaper. Lally's idea for solving America's "fiscal crisis" is to allow her to continue enriching herself by burying already poor people in paralyzing debt.

But, of course, she's only doing it to help those poor creatures who otherwise couldn't attend schools! If she happens to make a killing doing so, then the market is working its magic, I guess. This is the same argument used by exploitative payday lenders -- loan sharks in ghettos -- to justify predatory lending habits targeted at impoverished and vulnerable communities. Only it's coming from one of the most respectable members of Washington's elite, and not the proprietor of a check-cashing joint.

Of course, you know an industry is generally bad for the world as a whole once Goldman Sachs gets into it. Goldman bought part of predatory for-profit college chain EDMC in 2006, and it's already made a killing driving random people into crushing debt. EDMC uses sales tactics taken directly from subprime mortgage hustlers to find and retain customers.

But employees recounted a distinct culture shift once the company went private under Goldman Sachs and the other private equity investors, as day-to-day operations warped from a commitment to students and their success into an environment laser-focused on hitting mandated enrollment targets. New recruits were viewed simply as a conduit for federal student assistance dollars, the employees said, and pressure mounted from management to enroll anyone at any cost.

So we have incredibly rich and powerful elite institutions joining forces to bleed youths and minorities and poor people dry. And people wonder why there's marching in the streets.

CORRECTION: I said the 2005 bankruptcy bill made student loans nondisacharable in bankruptcy. A number of readers wrote in to correct me: It was actually 1998 amendments to the higher education act that removed all statutes of limitations on student loan debt and made the debt undischargable in bankruptcy, except in cases of extreme hardship, which the courts have made effectively impossible to prove. Similar votes in 1991 and the 1970s also made escaping student loan debt more difficult. The awful 2005 bill added private student loans to the loans that could not be discharged without meeting that standard. I apologize for the error.