Starz\' \"Boss\" is a tour de force about politics, power and the press -- and the inevitability of corruption 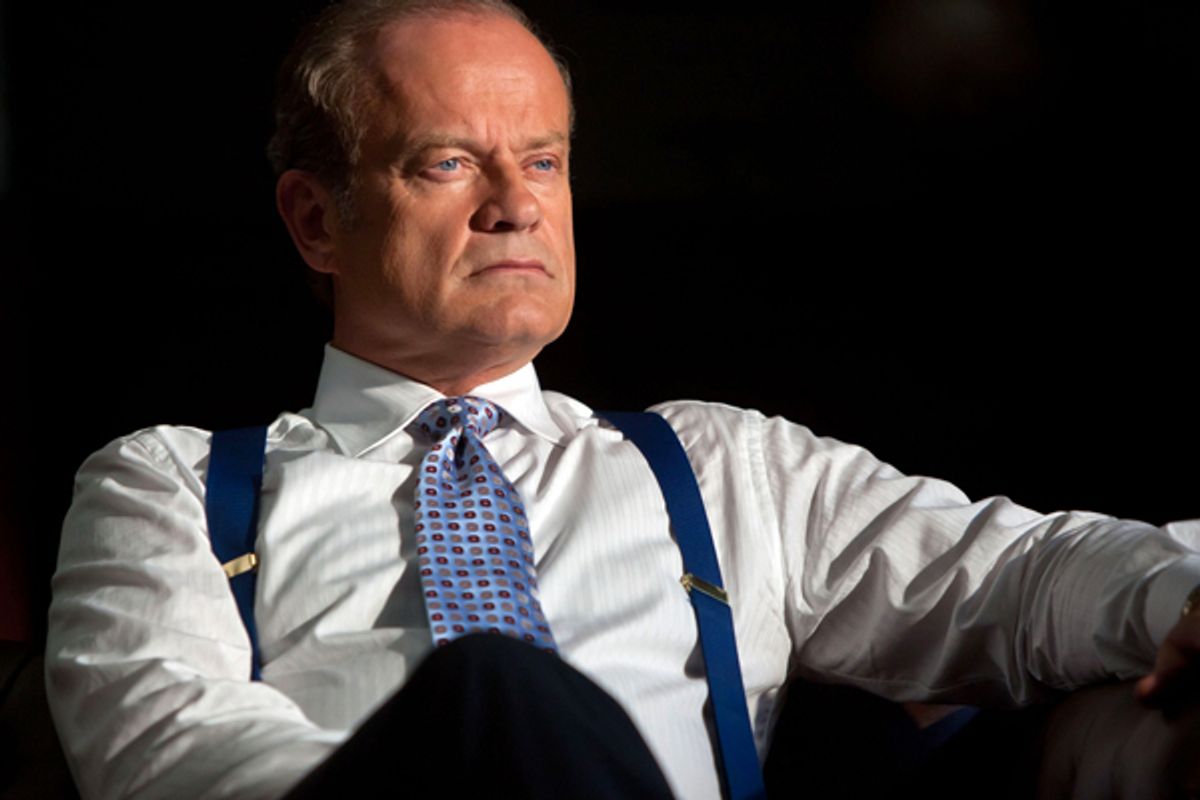 Here are my shifting thoughts during the first 10 minutes of the pilot episode of the new Starz series "Boss" (Fridays, 10 p.m. Eastern/9 Central), starring Kelsey Grammer as the mayor of Chicago, with time stamps:

(2:32) So apparently Kelsey Grammer had a "Eureka!" moment watching "Breaking Bad" one night, called his agent and said, "Find me a cable drama, and make sure it's gritty."

(4:20) Steve Buscemi is a brilliant actor, and I have tried with all my heart to appreciate his committed performance as Nucky Thompson on "Boardwalk Empire," but I must now concede that he was miscast. Grammer would have been perfect.

(9:35) I might need to recap every episode of this series.

Let's get the caveats out of the way first; I don't want to make you think this show is perfect, because it isn't -- not remotely. Any TV series that's built around a mercurial, brilliant, lonely politician with the same last name as Orson Welles' most famous character is asking for trouble. The premiere -- directed and executive produced by Gus van Sant, and written by series creator Farhad Safinia -- is so stuffed with characters and subplots that it's a wonder it doesn't detonate. Among other things, Kane is struggling to sabotage the sitting Illinois governor's reelection bid; groom a handsome and charismatic young Polish-American state's treasurer, Ben Zajac (Jeff Hephner), as the governor's replacement; prevent a 20-years-in-the-making O'Hare Airport expansion from getting sidetracked by the unearthing of a Native American graveyard; force Chicago's notoriously wily and stubborn aldermen to support his airport plan by tying a vote about the graves into a soon-to-expire sanitation funding bill; and reconnect with his estranged daughter, Emma (Hannah Ware), a reformed drug addict who serves as a rector at an inner-city Episcopal church and runs its struggling medical clinic. (Deep breath.)

Oh yeah, lest I forget: Kane's just been diagnosed with a rare and probably incurable neurological disorder. When Grammer told his agent he wanted his own "Breaking Bad," he wasn't kidding.

The show is set in present-day Chicago, but some of its political machinations have a retro flavor. In one scene, Kane physically terrorizes a city councilman in what feels like an outtake from a 1930s gangster picture. In another scene, a political enemy of Kane is mutilated with a ghastly casualness that feels very "Boardwalk Empire." I didn't believe that a real mayor could take part in either act, personally or by proxy, without being instantly exposed and booted from office, but the show expects us to accept such brutishness as an example of what Sean Connery in "The Untouchables" called "the Chicago way."

Van Sant's quirky directorial flourishes take some getting used to. "Boss" will often get out of one scene and into the next by showing you silent snippets of action accompanied by what sounds like voice-over narration, but which is actually dialogue from an upcoming scene -- a quasi-documentary affectation that Mike Nichols perfected in "The Graduate" and that Steven Soderbergh ("The Limey," "Traffic") has pretty much owned for the last 20 years. During emotionally or physically violent confrontations, the show will cut to super-tight close-ups of each participant's eye -- that's "eye," singular, a quivering orb filling the screen, the odd framing making the eye's owner seem less an autonomous person than a panicked lower mammal. The sex scenes are rough, in that macho urban drama way (lots of rutting in boardrooms and stairwells). Some of the female leads -- all of whom are skilled and compelling performers -- are scarily thin, and seem to have gotten boob jobs from the same plastic surgeon; one character, mayoral advisor Kitty O'Neill (Kathleen Robertson), is a faintly masochistic sex addict who lucks into a relationship with a like-minded, emotionally sadistic stud. Some powerful Hollywood producer's fantasies are being enacted here -- Grammer's, maybe? -- and they're gross.

But there's so much to like here -- so much to savor, remember and quote. The opening scene announces the show's determination to be TV's version of the modern urban-social novel that Tom Wolfe envisioned in his 1989 Harper's essay "Stalking the Billion-Footed Beast" and that David Milch ("Deadwood") and David Simon ("The Wire," "Treme") realized on HBO. If the show's ambitions aren't clear from its opening credits sequence -- a "Dog Day Afternoon"-styled montage of Chicago neighborhoods, landmarks and people, scored to Robert Plant's rendition of "Satan, Your Kingdom Must Come Down" -- they'll assert themselves when Kane invites Zajac onto the roof of city hall. Kane talks about a previous Chicago mayor who "understood people" and used that understanding to broker agreements between the city's warring ethnic tribes. From this roof, Kane says, the mayor could see "all 50 wards," and as Kane lists them, Van Sant's camera jumps back and gives us a good look. The modern-day skyscrapers that blocked our view of the horizon disappear, letting us look back through time and see the city as it was.

"Anesthetic solitude became one of the great motifs of serious fiction in the 1970s," Wolfe wrote, simultaneously hawking his own 19th century-styled first novel and blasting contemporaries who weren't interested in writing one themselves. "The Minimalists, also known as the Kmart Realists, wrote about real situations, but very tiny ones, tiny domestic ones, for the most part, usually in lonely Rustic Septic Tank Rural settings, in a deadpan prose composed of disingenuously short, simple sentences.” What Wolfe wanted more of -- unsurprisingly -- was the sort of book that he himself had written, and that he'd been practicing, in coded form, during his two-decade run-up as a New Journalist. "A novel of the city, in the sense that Balzac and Zola had written novels of Paris and Dickens and Thackeray in the foreground, exerting its relentless pressure on the souls of its inhabitants."

In a Salon slide show, I imagined what Tom Wolfe's "Bonfire of the Vanities" might look like if somebody at HBO decided to remake it as a limited-run series. There's no need to imagine it anymore; it's here, it has a similar energy and worldview but a different setting and story, and it stars Kelsey Grammer. (The scary-thin women of "Boss" might be this show's version of Wolfe's "social X-rays.") The situations and characters teeter on the edge of caricature, and the show's brazenly cinematic shots, cuts and sound effects evoke Wolfean literary hyperbole, even as the details of backroom politics and media gamesmanship anchor the drama in specifics -- in reality. Good thing, too; take away the grubby journalistic details and the florid, theatrical, borderline-"Deadwood" dialogue (strong-arming the aldermen into letting the city's sanitation contract lapse, Kane bangs his gavel and barks, "Let the streets run with shit!"), and the show would collapse under the weight of its pretensions. Sometimes you can feel it wobbling.

But even at its worst, "Boss" radiates intelligence and toughness, and an appreciation of politics as a nonstop performance in an unscripted drama. A colleague has compared it to a tougher, localized answer to "The West Wing," but I don't think that's right, because "The West Wing," for all its eloquence and idealism, was set in a world that Aaron Sorkin wished existed. "Boss" is set in this world. It's sometimes opulent but never glamorous or reassuring. Every one of its characters, from leads to bit players, is living a compromised life, from the power broker Kane and his equally smooth and ruthless wife, Meredith (Connie Nielsen of "Gladiator"), who dote on each other in public but haven't shared the same bed in years, down to the Mexican immigrant workers at the airport who make union wages for doing nothing and amuse themselves by giving a dogged reporter, Sam Miller (Troy Garity), useful facts while urging him to eat a taco so spicy that it makes him ill.

"Boss" has a knack for showing how people conform to social type while simultaneously revealing the thorny individual lurking inside the type. I know a young activist who reminds me of the mayor's advisor, Ezra Stone (Martin Donovan) -- a consigliere whose outwardly bland demeanor masks a ruthless political mind. I've interviewed influential women who, like Meredith Kane, have mastered the art of smiling pleasantly while plotting enemies' political deaths. I've worked alongside reporters like Miller, a smelly savant who's not a writer but a "digger," and who prevails not in spite of his arrogance and lack of social graces, but because of them. (Stone describes Miller as a man who has no bridges to burn.)

"I took a job with the housing authority. I was overqualified and underpaid," says the up-and-comer Zajac, during his first conference in Kane's office. "Then everything changed. My worst day there was always better than my best in the private sector."  As Zajac speaks, laying out his resume in the silky tones of a young man who might be president one day, Kane listens patiently for a minute, then stands up and dons his suit jacket. When Zajac gets to the part about his worst and best days -- a line that seems tailor-made for a campaign ad -- Kane grins, and exclaims, "This fucking kid!" He knows the type.