If the dictator was in fact executed illegally, it could cause serious problems for the new government 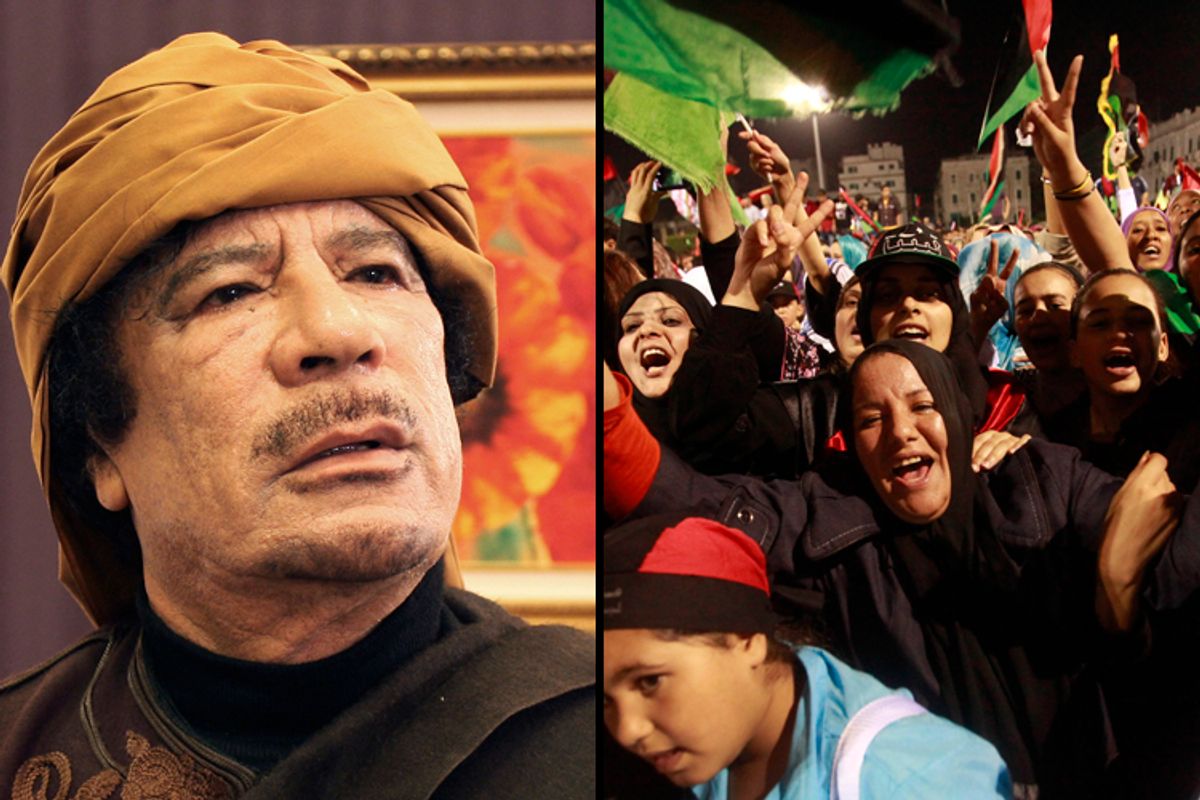 The circumstances surrounding the death of Moammar Gadhafi are raising serious questions that could cast a dark shadow over Libya's revolution.

Initial accounts indicated that the former Libyan leader was killed in crossfire, or struck by a NATO airstrike. But it's now clear that he died in captivity, after being mistreated by soldiers fighting on behalf of Libya's new government, the National Transitional Council.

It's possible that Gadhafi died of wounds that were inflicted before his capture. Mortal wounds inflicted in battle do not violate international law.

But emerging evidence suggests that he may have been killed while in custody. If so, that would constitute a serious war crime, human-rights advocates say. It could also tarnish the new government's standing, especially if other crimes are revealed, and if the perpetrators are not held accountable.

Gadhafi was "found alone in the drain pipe, surrounded by the bodies of his guards who had been shot as they tried to flee Sirte," reports GlobalPost's Tracey Shelton citing anti-Gadhafi combatants. He had "injuries to his legs, torso and head," she writes, but he was clearly alive.

An exclusive iPhone video obtained by GlobalPost shows the immediate aftermath of his capture. At first he walks under his own control, before being seized by an armed mob. Violence ensues. Libya's longtime leader is kicked and punched. A gun is pointed at his head. Cries of Allahuh Akbar (God is Great) are punctuated with the staccato of gunfire — although in the scuffle it's not clear whether the shots are aimed at Gadhafi. A knife is held to his neck, but the camera jolts away. Ultimately, a very bloodied but still apparently-walking Gadhafi is led to waiting vehicles.

Later, the NTC confirmed that Gadhafi was dead.

The matter is attracting international scrutiny.

"We believe there is a need for an investigation, and more details are needed to ascertain whether he was killed in the fighting or after his capture," says Rupert Colville, spokesperson for the United Nations High Commissioner for Human Rights. An independent Commission of Inquiry for Libya, established by the United Nations Human Rights Council, "is very likely to look into this," says Colville.

"There's clearly blood on him" early in the video, notes Fred Abrahams, Special Advisor to Human Rights Watch, an expert in armed conflict fact-finding. "The question is, did he die of wounds inflicted before or after capture."

"If Gadhafi was executed in captivity and that goes unpunished, it sends a message that Libyans can take justice into their own hands," notes Abrahams. "Whether they're senior officials, security officials or the neighborhood spy, people who committed crimes over the four decades should be tried in a court, and not lynched by their neighbors."

He points out that arbitrary justice is exactly what Gadhafi exercised for 42 years. "The goal of the revolution was to break from the past, not to repeat it."

Muammar Gadhafi's death is not alone in raising questions. His son Mutassim was also killed yesterday under murky circumstances.

In Mutassim's case, a three-second video posted on Facebook, purportedly taken after his capture, shows him sitting upright. He takes a drag from a cigarette, and begins to speak. His shirt is bloodied, but no wounds are visible. Later, photos show him dead with a wound in his neck. (The Facebook video's date and authenticity could not be immediately confirmed by GlobalPost.)

Human Rights watch is calling for an independent inquiry into the death of Gadhafi and his Mutassim. "A lot of faces on the [Gadhafi] video are clear, so they should be able to speak with some of the people who participated in his capture. And we think that the investigation should have an international element, including an internationally supervised autopsy," to provide that extra layer of transparency.

Meanwhile, Human Rights Watch is also concerned about the fate of others captured on Thursday, including Mansour Dow, a senior Gadhafi security official. The identity and number of captives remains unknown. "We're afraid that these people will be mistreated or killed in custody." Their treatment is essential not just for their well-being, Abrahams says, but for their value in future trials for crimes committed under Gadhafi.