Obama touts the job benefits but the real winners are Big Pharma, Big Oil, and our favorite vampire squid. 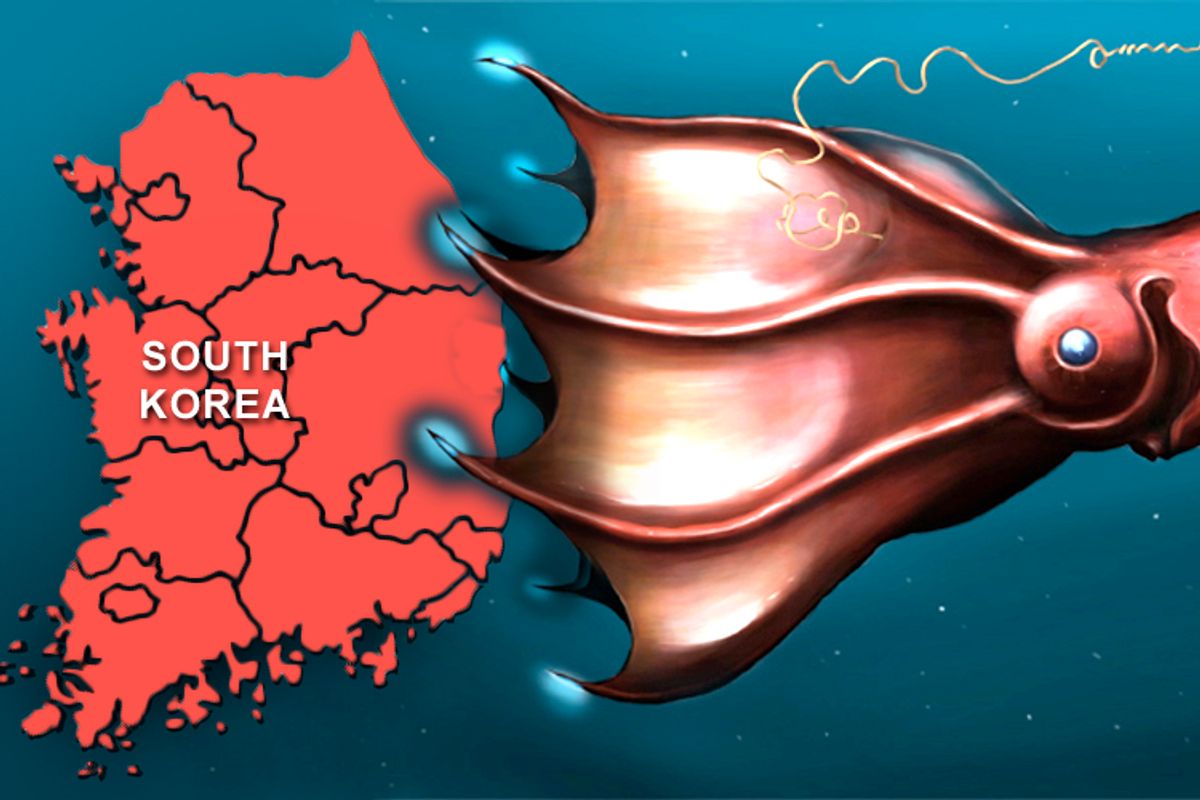 On Friday, more than five years after George W. Bush started pushing for the passage of free trade deals with South Korea, Colombia, and Panama, the agreements finally reached President Obama's desk and were signed into law.

Some sectors of the American economy will benefit from a significant drop in tariff protections across the board, and some will not. But you can throw away all the studies conducted by supporters and opponents pinpointing exactly how many hundreds of thousands of net jobs will be added or lost. Determining the economic impact of trade agreements is fiendishly difficult, and the ideological predispositions of the various parties engaging in the free trade debt are far too fixed to have any confidence in their claims and counterclaims.

But that's not to say we can't declare a winner. If you want to know who benefits most from free trade, all you have to do is look at the list of co-chairs steering the U.S.-Korea FTA Business Council -- the gold-plated blue chip clearinghouse for corporate support of the biggest of the three trade deals, the South Korea FTA. They include:

That is some multinational, deep-pocketed, globe-spanning power! The second largest U.S. oil company, the world's largest pharmaceutical company, two of the most powerful U.S. financial institutions, and one aircraft maker that has long enjoyed a premier position in the U.S. military-industrial complex.

What Boeing stands to gain from the FTA is the easiest to discern. Boeing already sells around $2.4 billion worth of aircraft-related goods and services to South Korea, but faces tariffs ranging from 3 to 8 percent on many of its products. Lower tariffs mean higher profits for Boeing.

Pfizer's case is a bit different. The influence of multinational pharmaceutical companies on the fine print of free trade agreements has always offered one of the most telling demonstrations of why there is nothing "free" about them. Among the provisions of the South Korea FTA are limitations on South Korea's ability to authorize generic versions of foreign drugs, get access to safety data about those drugs, and, perhaps mody insidiously, determine which drugs South Korean healthcare plans will provide reimbursement for.

As I wrote, five long years ago:

... Negotiations of the pharmaceutical subcommittee involved with the free trade agreement currently being hammered out between South Korea and the United States were suspended on Tuesday afternoon, due to disagreements about the Korean government’s plan to change its drug reimbursement pricing system. The government wants to move to a “positive list” system, in which it will pre-announce which drugs it will pay for. Big Pharma hates this, because they’re afraid that it will mean that the most expensive, and profitable, drugs, will not make the list.

What about Citigroup and Goldman-Sachs? According to a detailed analysis by the United States International Trade Council, the South Korea FTA "would likely generate a substantial increase in U.S. exports of banking, securities, and asset management services to Korea. It would achieve this though such measure as removing obstacles to the "acquisition of existing Korean firms, reduced residency requirements for senior executives, and the elimination of minimum investment restrictions for foreign direct investment." In other words, the big will just get bigger.

And finally, there's Chevron. Chevron is already a big player in South Korea, a partner for more than 40 years with GS Caltex, the second largest energy company in Korea. Chevron is on record as supporting the free trade agreement because it will "strengthen investment protections" -- which essentially boils down to making it easier for Chevron to legally defend itself from anything the government might do that it doesn't like.

Employment at these multinational corporations may well increase as a result of the South Korean free trade agreement -- although some of those jobs certainly will be in South Korea, not the United States.

The over-riding lesson that is to be learned here is that free trade agreements are crafted to serve the interests of multinational corporations, and those interests, we should have learned long ago, are not necessarily synonymous with the greater good for the largest number.