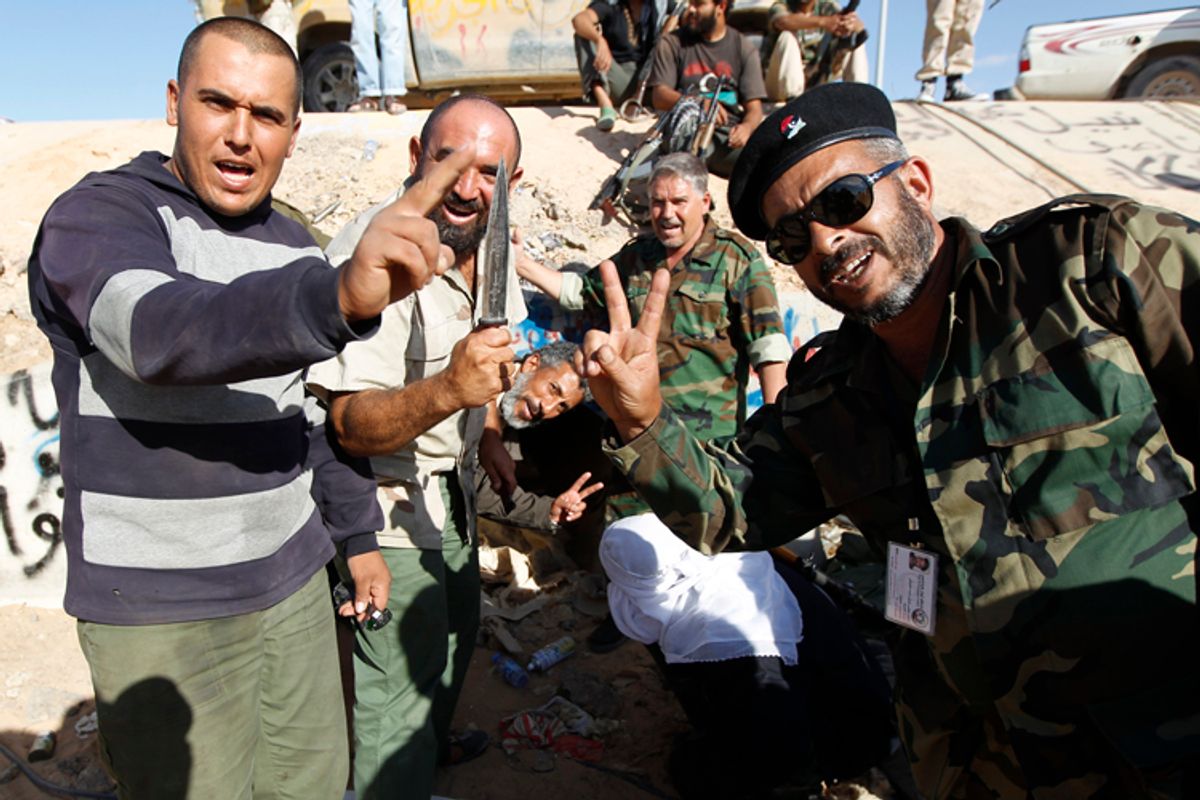 Anti-Gaddafi fighters celebrate at the drain where Muammar Gaddafi was hiding before he was captured in Sirte October 20, 2011. (Thaier Al-sudani / Reuters)
--

SIRTE, Libya -- The capture of Col. Moammar Gadhafi, found cowering in a stormwater drain, marked a sudden and surprising end to the Libyan revolution on Thursday.

With injuries to his leg, torso and head, Gadhafi was found alone in the drain pipe, surrounded by the bodies of his guards who had been shot as they tried to flee Sirte from the west.

In video footage captured on the mobile phone of 21-year-old Ali Algadi, Gadhafi is seen being dragged from his hiding place, bloodied and dazed. Those present shout repeatedly, "Don't' kill him! Don't kill him! We need him alive." But the long-time Libyan leader was later confirmed to have died.

"I can't tell you how good it feels," said Algadi as he sat near the drainage pipe now decorated with anti-Gadhafi slogans. "When we came here we thought it was just snipers, that's it. Then one of the guys started yelling Moammar Gadhafi! Moammar Gadhafi! He had him by the leg and was dragging him from the hole. He was hiding like a rat."

One of the men who dragged him from the drain was Ibrahim Abuziad.

"When we came to arrest him he was saying, "What do you want with me? What is going on? What happened with you?"" Abuziad said at the scene shortly after Gadhafi's capture. "He was like crazy. He was waving this [white hessian sack] above his head."

In the shaky footage, the former dictator is kicked and hit. Dirt is thrown into his face as he is dragged by a crowd of rebel fighters to a waiting vehicle.

Tirana Hassan of Human Rights Watch said they have confirmed Gadhafi's death through video evidence and reports from the Misrata committee of the National Transitional Council.

"The NTC confirmed he was captured alive but died on the way to Misrata. I'm not a medical expert but he has clearly been shot once in the head and twice in the abdomen," Hassan said.

Shortly after Gadhafi's capture, rebel fighters celebrated at the scene, hugging each other, firing guns in the air and shaking their heads in disbelief. Some wrote the names of their battalions around the concrete drain and labeled it "Gadhafi's hole."

One man held up a brown sock tied around his rifle butt.

"This is the sock of Moammar Gadhafi, I swear!"

"Have some Gadhafi cake!" offered another, holding out a spoonful of dessert, apparently from Gadhafi's personal stock.

The bodies of three of Gadhafi's bodyguards still lay scattered around the drain pipe. All wore civilian clothes. Their bodies had been respectfully covered by the fighters. The leg of one man was in plaster from a previous injury.

Nearby was a cluster of several more bodies in a field. Several fighters said Gadhafi's son Mutassim had been captured in this area. Lufty Alamin, who transported the body back to Misrata, said that he was shot in the chest while attempting to flee.

At dawn, 40 cars had fled from central Sirte as forces moved into the inner city area from the East.

"Each car that fled was covered by heavy fire from many rooftops," said Farg Saud Megarif, 26, as the rebels cleared the last snipers from the remnants of the smoldering city earlier Thursday morning, before the dictator's capture. "They stayed behind to protect the cars like a suicide mission. I think there must have been someone important, like a high official or something for these men to give their lives like that."

Megarif said 12 cars had left from their section but the heavy cover fire prevented them from stopping the vehicles. Forty cars in all fled along the beachside but NATO Apache helicopters disabled the convoy, killing dozens.

Along the road and in the surrounding area, burned out cars still smouldered. The bodies of their occupants lay nearby. One man, still alive but unable to move said Gadhafi had been with them in the convoy but had escaped with Mutassim.

Algady said his unit, whose base is situated adjacent to the drain where Gadhafi was found, came under heavy fire from the vehicles as they fled the city.

"I thought we were all going to die," he said pointing to the damage covering the building. "Their cars were about to enter here. Then NATO struck them at the last minute."

The remaining men fled into the fields. Several prisoners captured the night before had confirmed Gadhafi's son Mustassim was still within Sirte. As Algady and several battalions pursued the escapees, they had been expecting to find him. No one had expected Gadhafi himself to be among the convoy.

"I thought for sure he was in Algeria or somewhere outside," said rebel fighter Shakir Mohammed, who seemed still in shock over the sudden and dramatic end to the conflict. "I want to celebrate -- it's over -- but even though my eyes have seen it my mind still doesn't believe it."

Within Sirte, bodies littered the streets. The body of one sniper lay on a rooftop. Wooden boards formed walkways to neighboring houses. In courtyards, holes had been blown through the stone fences to form escape routes. Rebel fighters towed away damaged cars. The houses, mostly blown to pieces by rockets, grenades and gunfire, seemed empty of possessions.

Several food stores still held stocks of cooking oil, rice, beans and tomato paste. Rebel fighters said they found weapons and ammunition buried in many of the houses, showing the loyalists still had some supplies.

Back in Misrata, celebrations rang out across the city. It seemed the entire population had taken to the streets tooting car horns, waving flags and setting off fireworks.

"What happened to Gadhafi is the same as Saddam," said Abuziad as he wrote the name of his battalion above Gadhafi's hiding place. "We got both of them from holes. In the end we found out who the rat is."

Rumors that Saif Gadhafi was also captured have also circulated but are as yet unconfirmed.