The real problem for Marco Rubio

He's probably not the serial embellisher a new story makes him out to be, but it's still a sign of a deeper issue 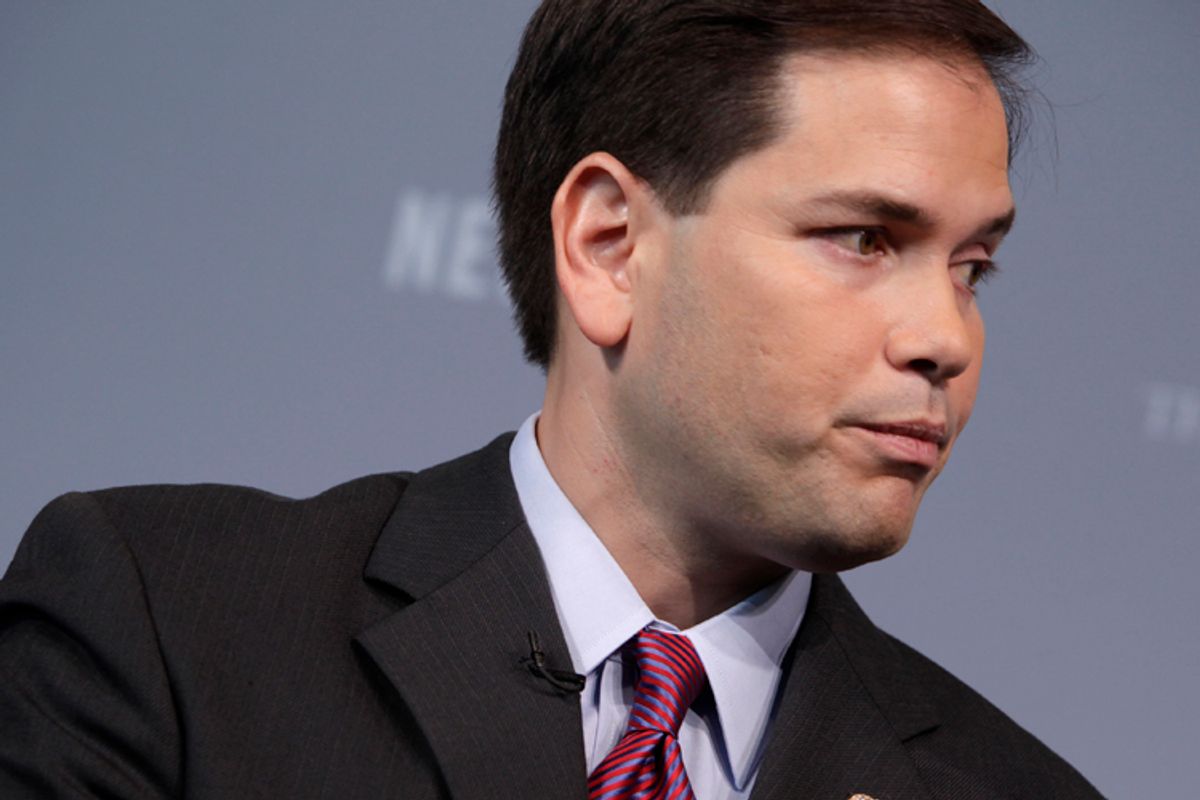 Marco Rubio, the Cuban-American Tea Party hero who was elected to the Senate from Florida last year, is one of the first people anyone mentions when the subject of the No. 2 slot on next year's GOP ticket comes up. Even Mitt Romney, the front-runner for the No. 1 slot, invoked Rubio's name (along with two others) when he was asked about potential running mates a few months ago.

At first glance, then, a Washington Post story that charges Rubio with embellishing facts about his family's flight to America would seem to be a potentially devastating blow to his national prospects. There's good news for Rubio, though: There really isn't too much to the story. Basically, the Post found that Rubio's parents left Cuba for the United States in 1956, three years before the 1959 revolution that brought Fidel Castro to power. This is at odds with the official biography on Rubio's Senate website, which claims that he was "born to Cuban-born parents who came to America following Fidel Castro's takeover." This claim is demonstrably untrue and presumably the Rubio website will be updated.

But beyond that, all the Post really has are a few instances of Rubio talking about himself as "the son of exiles" and getting the precise date of his parents' departure from Cuba wrong. He's also failed to correct a few interviewers who claimed his parents left after Castro took power. There's context here that (mostly) exonerates Rubio, though. For one thing, in a video the Post cites in which Rubio calls himself the "son of exiles," he makes clear that he's referring to the Miami community in which he was raised, which was filled with authentic Castro exiles. Plus, Rubio suggests his parents should be thought of as exiles anyway, since they had wanted to return to Cuba after spending a few years in America but were scared away permanently by Castro's rise. (Rubio even says his mother returned briefly in 1961 with the idea that her husband would soon join her.) This seems like a reasonable claim, as the Miami Herald's Marc Caputo explains:

Regardless of when his parents left Cuba, they were exiles because they stayed in the US, specifically Miami, in a community where they soon felt they couldn't go back to their homeland. Though the story said his parents left for economic reasons, it's silent about the fact that the dictator before Castro, Batista, was so brutal that it made Castro look like a good alternative at first

That leaves the instances in which Rubio offered the wrong year for his parents' move, but here it seems like he was simply guessing -- "my parents and grandparents came here from Cuba in '58, '59." As Caputo notes, this suggests Rubio is guilty of something other than embellishment:

Rubio's inability to remember these specific dates isn't much of a surprise. Rubio is sometimes sloppy. When he was in the Florida House, he failed to disclose a loan at one point and fill out his financial disclosures properly. He rung up a host of personal and questionable expenses on a Republican Party of Florida credit card and couldn't show how they furthered party business.

Indeed, the Washington Post story notes that "details have changed in his accounts" of his grandmother's death -- whether it happened when his father was 6 or 9. That's not embellishment. That's evidence of sloppiness.

That sounds more like it. And sloppiness could be a real concern when it comes time for the GOP presidential nominee to pick a running mate. In addition to the GOP credit card issue, Rubio's own finances were the source of considerable embarrassment during his Senate campaign last year, leading one Republican consultant to say: "There seems to be a pattern of behavior in which he's not good at controlling his own money or the money of others.'' This is the sort of stuff that could raise serious red flags during the V.P. vetting process. And you've got to imagine that after the Palin experience of 2008, the next GOP nominee will be a little more careful.