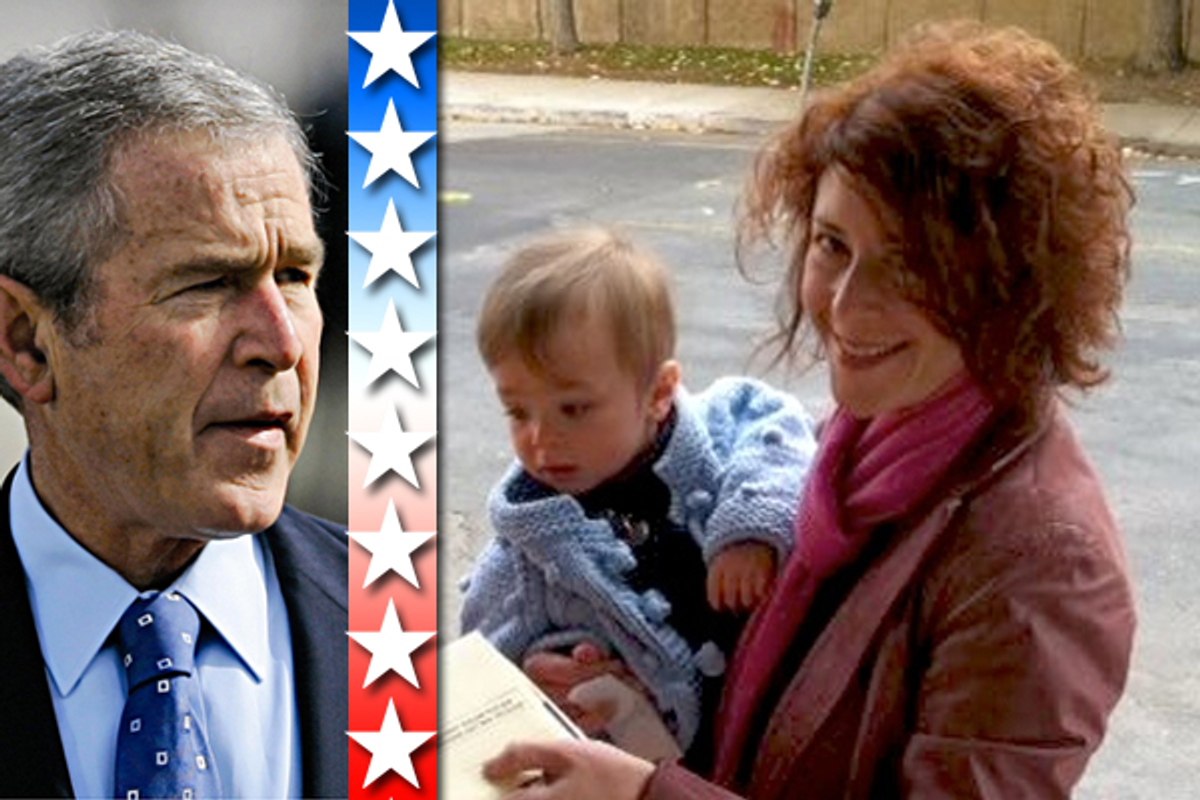 Left: George W. Bush. Right: The author's wife holds their son as she mails her ballot for the election. (AP/Courtesy of the author)
--

Before it happens, it's hard to know how you'll feel when you see a slickly produced, oil-CEO-financed flier implicitly attacking your 11-month-old baby for not being old enough to attend school and explicitly criticizing your family for not being able to afford a home.

It sounds like a takeoff of "SNL's" hilarious "bat problem" campaign ads -- something so over-the-top it couldn't possibly be real. But, in our case, it wasn't a parody -- such a mailer now fills up thousands of mailboxes throughout my town. And unfortunately, I now know how badly I feel in the face of such a barrage. I'm not overwhelmed by anger or vengefulness. Instead, I'm experiencing a far more numbing set of emotions: a mix of sadness and helplessness.

Six months ago, when my wife, Emily, decided to run for a school board seat here in Southeast Denver, I was (perhaps naively) expecting what we used to get from the most local of local races for such part-time, unpaid positions: lots of door knocking, a few yard signs, maybe a barbecue or two -- all the wholesome activities that were once staples of local political Americana.

Emily knew it would be a tough race against her opponent, a deep-pocketed investment banker, but she felt confident she could run a solid campaign. She thought her experience as a social worker and community organizer in Denver gave her the tools to mount a good ground game, and she felt that her longtime policy work at the federal, state and local level was a good match for the school-board job. She also has deep roots in the community; her campaign has been endorsed by the district's state representative and city councilors, by the city auditor, and by the key legislators who serve in the state's senior education policymaking positions. And she was more than willing to do the grueling work that campaigns demand: walking precincts, answering questions at events, and calling every single person she knows and begging them for a few dollars.

Yet, as summer turned to fall, it's become clear that this local race -- like so many local races across the country -- has turned into another arena for corporate muscle-flexing and elite political rainmaking.

Emily had thought a "big" contribution meant a few friends joining up to scrape together $500. But, in the last few weeks, news broke that oil CEOs and financial executives were cutting $10,000 and $25,000 checks to her opponent. We found out that notorious front groups like Stand for Children were funneling in tens of thousands of dollars of out-of-state financial industry cash, and we started hearing about serious threats of retribution from big-time professional politicians.

Not surprisingly, many of these donors and politicians are part of the larger national network aimed at undermining traditional public education -- a movement that has succeeded in voucherizing the school system in neighboring Douglas County and that has placed Rupert Murdoch-funded voucher activists right here in Denver. In the process, this little grass-roots school-board race has become so inundated by big money and national political forces that none other than former President George W. Bush just made an education-themed appearance - one clearly designed to influence the education debate dominating the upcoming school board election.

There's a larger, more universal parable in what's going on here. What this all represents is an escalation that's happening everywhere.

All this money and power converging to try to influence an election -- while this kind of thing was once confined to national campaigns, the corporate and political elite are no longer restricting their election financing to federal races. At the state level, they have the American Legislative Exchange Council -- a sprawling organization designed to fix up corporate campaign contributors with state legislative campaigns and ultimately buy industry-friendly state statutes. At the local level, there are often no campaign contribution limits at all, so the rich are free to dump enormous sums of money into elections. (Here in Denver, for instance, EdNewsColorado reports that "one quartet of donors gave a combined $92,000 each to the same three candidates, all of whom have been endorsed by the Colorado chapter of Democrats for Education Reform and by Stand for Children" -- two front groups funded by the financial industry.) As NBC's local affiliate 9 News noted in reporting on a coordinated Republican Party attempt to buy school board races all over the state, "Once thought to be 'mom and pop,' [school board] elections have now turned into coordinated, professional campaigns."

As I've watched my wife's opponent rake in these huge checks, break campaign spending records, erect massive highway billboards and fill mailboxes with a daily stream of glossy fliers, all I've really been able to do is offer moral support. I can draw on my past experience as a campaign guy and try to reassure my candidate-wife about the aforementioned negative mailer that purports to objectively compare Emily's life, career and record with that of her opponent's. In one row, it contrasts my wife and her opponent based on the "number of children [each has] in Denver Public schools." (My wife's opponent: "3 daughters, 15 years and counting"; my wife: "0.") And I can tell her that voters will realize that this particular comparison is grossly unfair, because it suggests that our son not being old enough to attend school is somehow a personal failing. On another line, it compares the number of years each candidate has been "a homeowner in southeast Denver." (My wife's opponent: "21 years"; my wife: "Just over 1 year.") And I can also assure her that lots of voters will be turned off by the elitism of this suggestion that because our family has only owned a house for a year and a half that Emily must be some sort of interloper, rather than simply part of a Denver family that wasn't yet able to afford to purchase a stand-alone home until then.

I can do all of this, and I can hope my wife wins (and because she's knocked on 5,000 doors and has managed to build such a wide grass-roots campaign, internal polls show she might). But here's the truth I can't escape as this election draws to a close: I know that whether she wins or loses, the real damage has already been done.

When the same elites who fund federal elections start pouring unfathomable sums of money into our community's school board races, it robs us of the last promise of democracy: the hope that while wealth and power dictate federal and state policy, every person can still have a small impact on his or her own local community.

As many major campaigns as I've worked on, and as much experience Emily has in the public policy arena, we didn't realize that local races had become this corporatized. Maybe we were naive, or overly idealistic, but the point is that something has gone deeply wrong in America when elections about our local schools have becomes yet another chess board for oligarchs.

Even knowing all of this, I (obviously) still want my wife to win -- and lord knows, that's because as her (admittedly super-biased) husband, I think she'd be great at the job, not because of any personal or financial reason. After all, being on the school board in Denver, as in so many other towns, is an unpaid position that will force her to spend lots of time away from her other work and from her family.

But along with wanting her to win, I also want our family's experience to be a small, microcosmic reminder about how high the stakes now are in every level of our politics. Big money is intent on owning every public institution from the White House to the schoolhouse. You need to know that if you ever think of running for office -- and, as important, you need to remember it the next time you get your ballot.

It's easy to delude yourself into thinking that the only elections that matter are celebritized presidential and Senate contests, and that local elections for your school board or town council or county commission don't count. Clearly, that's not the case. The most powerful people of all sure think those local races do matter -- and they're now willing to spend what it takes to exploit your apathy and rob those elections from you.