After I defriended an old acquaintance, I had to wonder: Why have I grown so intolerant of any dissent? 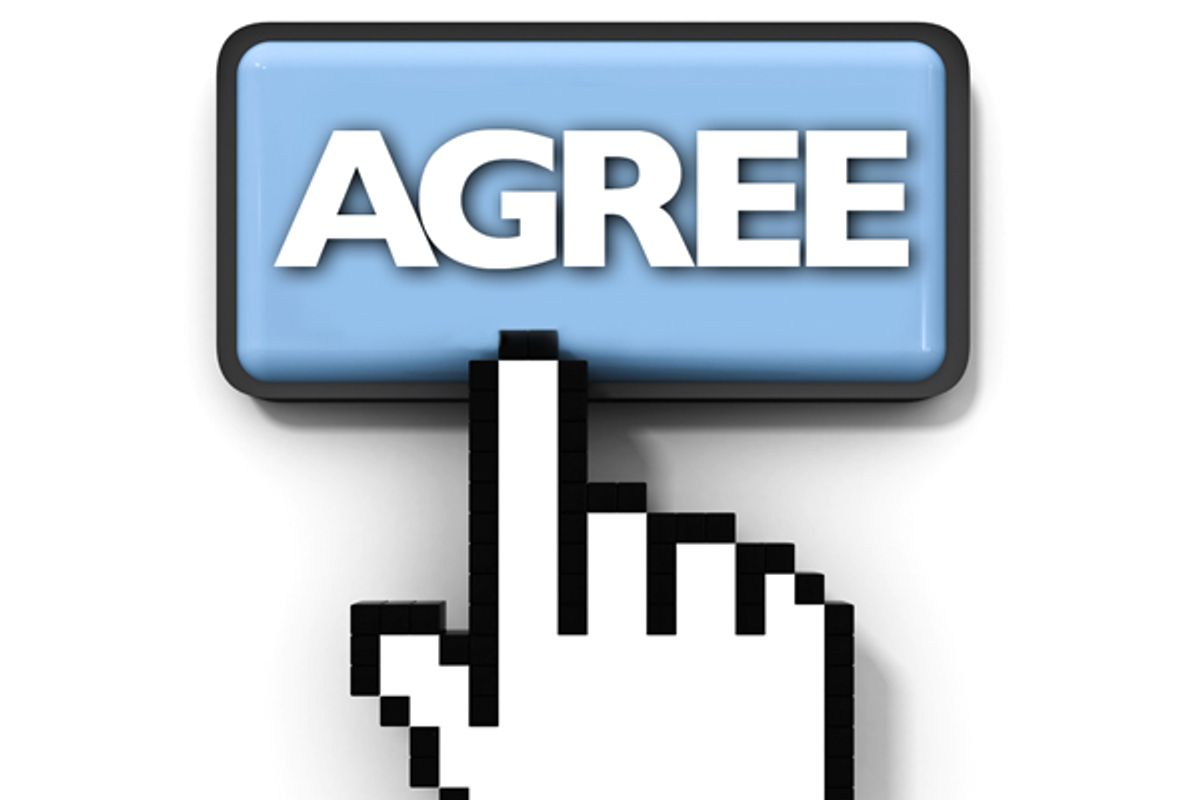 A few months ago, for reasons I don’t quite understand, I thought it would be a good idea to become Facebook friends with some people I knew in high school. Nostalgic, bored, procrastinating, emotionally unguarded after wrestling the kids into bed, Facebook’s algorithmic magic produced these old classmates’ names and before I knew it, I’d reached out to them with a click.

Why? I wondered almost immediately. These were people to whom I hadn’t spoken in more than 15 years, people I hadn’t much liked at the time, people with whom I’d had little in common besides geographic proximity and attendance at the same underperforming high school in central Virginia. I regretted it instantly, but tried not to worry. After all, I’m Facebook friends with plenty of people I don’t know well or like much, second cousins in south Florida, random playgroup moms, people I’ve met on planes or at Starbucks. What did it really matter -- having a few more virtual strangers in my life. That was what I thought. Then, a day or two later, I read one of their posts.

President Obama had just given a televised speech on the economy, and this particular gentleman, someone I’d never known well but with whom I’d shared a neighborhood and a classroom for most of kindergarten through 12th grade, a fellow I remember as being pleasant, a bit on the quiet side, a member of the marching band, certainly not a bully or a jerk, had written, “Just turned off the t.v. More lies from B. Hussein Obama.” Within a few minutes, 10 people had “liked” this comment. Within a few more minutes, others had begun to add comments of their own, nearly all of which made reference to the president’s skin color, “questionable” national origin, or socialist death-panel agenda. I nearly fell out of my chair. My heart was racing. I squinted at the screen. I read the comments again and again. This was the real deal, not on Fox News but right here on MY computer, on MY Facebook page. I’d invited it in, that horrible place I’d left the day I graduated from high school. I looked down at my keyboard and saw that my hands were shaking. I decided to add a comment of my own: “Don’t like! Boy, am I glad I don’t live in Richmond anymore. You are un-friended!”

Trying to distract myself, I browsed the status of my other Facebook friends, listened to a little NPR, and yet I kept returning to that moment of profound disorientation, that feeling of having slipped into some alternate political universe. Where am I? I’d felt like asking. Who are these people? Am I truly that out of touch with the place I grew up? Have I actually constructed an enclave of liberal, secular, urban-dwelling, like-minded 30-somethings so sealed off from the rest of the world that a tiny breach in the form of a Facebook post could so thoroughly floor me?

And then I did what I’m a little embarrassed to admit I often do when presented with a problem I can’t solve: I called my dad.

“Have you ever heard a real person refer to our president as ‘Barrack Hussein Obama’?” I asked him.

He laughed. “You mean since lunch?”

My father is a physician in central Virginia, and over the past 35 years he has spent countless hours chatting with his patients, employees, a whole cross-section of regular folks, not shy in their deep social and political conservatism. He told me that he frequently listened to patients rail against the looming menace of socialized medicine right before happily handing over their Medicare card.

“How do you stand it?” I asked him. “How do you not walk around in a constant state of indignation?”

“Oh, I get indignant,” he replied. “I get plenty indignant. But I don’t let it escalate to outrage. If you get outraged, you never learn anything.”

But the truth was, I was walking around in a white-hot rage much of the time. I feel a chronic state of exasperated disbelief at the depth and degree of our country’s current screwed-up-ness: the 100,000 Iraqi civilians dead or the 14 millions Americans out of work, the melting Arctic ice caps or the oil-slicked gulf or the carbon-choked atmosphere, the judicial branch of our government that’s been transformed into a theocratic body, the executive branch’s ongoing infringement of civil liberties and so on and so forth. Like the folks occupying Wall Street, I’m angry. And online, I surround myself by other people who are angry about the same things. At times, our collective anger seems a worthwhile thing -- it has a weight and shape and force we couldn’t achieve as individuals, but at other times, I can’t help wondering how much it really accomplishes, if in some ways it might even impede us in our attempts to be more thoughtful, “enlightened” human beings.

As an angsty teenager and college student, I used to mock people who lived in gated communities, who were so afraid of the unfamiliar world they had to erect a physical boundary to keep it at bay. But now I wonder, aren’t the boundaries we draw with Facebook just as secure as a man-made moat or an underpaid security guard manning a booth? Was the daily back-and-forth on my Facebook feed really a conversation, or was it no more than an echo chamber?

A few days ago, a friend of mine sent me an email about the havoc Occupy Wall Street had wreaked on her Facebook feed. She told me how one pro-OWS friend (also a former classmate from a conservative Southern high school) literally began a post with, “For those of you who haven’t blocked me yet.” A few days before that, my friend had grown furious when another former classmate posted the “53 percent” poster, in which a former Marine expressed why he thinks the OWS movement is a bunch of liberal whining. “I was so angry and frustrated seeing these 'LIKES' pile up underneath it, these virtual high fives ... But the majority of my Facebook feed is like 80 percent pro-Occupy Wall Street. So for me it was a moment of: Wow, I just can't tolerate any dissent.”

As I asked others about political discourse on Facebook, this was the sort of story I heard again and again. One person got into a hardcore scuffle with a friend’s Republican mother when she posted about the need to protect funding for NPR. Another talked about how enraged she was when, during the general jubilation over Obama’s election, one “friend” posted about the need to pray for the future since the “anti-christ” had been elected. And the common thread in all of these instances was a feeling of shock, a profound bewilderment at one’s private space having been invaded by the political-cultural-socio-religious “other.” We block, we hide, we un-friend, we condemn. And in doing so we can all feel like we’re doing something. It’s wonderful, in a way; we can occupy Wall Street without leaving our living room. Of course, as with anything, there are exceptions ...

The same friend of mine who found herself sparring with a 50-year-old housewife over NPR recalls another instance involving a relative whose right-wing perspective she’s actually come to value through Facebook. She tells me, “He's as passionate about the right wing as I am about the left. And many of his posts are genuinely funny -- not just taking potshots at the other side, but laughing at himself, too. His posts give me real insight into what the right is thinking, which I kind of appreciate and have come to value.” My friend emphasized, though, how unusual this sort of insight has become. The far more common experience seems to be that when we hear actual discord, our immediate reaction is not to argue or persuade but to silence, unfriend, block, annihilate -- which is of course exactly the sort of stonewalling, obstructionism happening in Washington.

Her story, though, reminded me of someone I knew back in Virginia, an old lady who lived down the street from us. She was twice my parents' age, a lanky woman with coiffed white hair and a perpetual tan. I remember her as always wearing blue Bermuda shorts and smoking a mentholated Virginia Slim cigarette. She belonged to what she called “an old Chesapeake family,” and there was a Confederate loftiness to her accent and her opinions. She used to invite my whole family down to her house on the James River where we’d catch crabs on the beach and swim until our limbs ached, where she made us lemonade and bought us little presents and took us out on the family boat and mixed pitchers of Old-Fashioneds all the grown-ups raved over. And then one day she came by our house to show off a new puppy she’d just adopted, an inky lab with a silky coat and a pug snout. “We’re calling him Douglas,” she told us. “After the governor [Doug Wilder, the first African American governor of Virginia]. We’re naming him that because he’s soooo black.”

I was only 10 or 11 but I understood what she had said -- I understood not just the meaning but the shading, the implications. I loved her. She was a sweet, old lady and a good neighbor and a woman who made racist remarks; she was a family friend and a bigot -- she was both these things at once, but we lived down the street from her for 15 years and she’s woven into my earliest memories of childhood and home. We all have memories of such friendships, relationships we might never have chosen, but that challenge and change us in unexpected ways. In Facebook, we have the choice to simply opt out of such challenges, to crop the frame in whatever way suits our political orientation or cultural sensibility. In a world of friending and unfriending, the 99 percent versus the 53 percent, Obama as antichrist against Obama as savior, who, I wonder, has the tolerance anymore for such messy contradictions, such tainted, imperfect kinships? Who has the patience?