The American dream, in all its decaying beauty

Victoria Sambunaris started shooting American landscapes on road trips. When she pulled over, she found the country’s soul 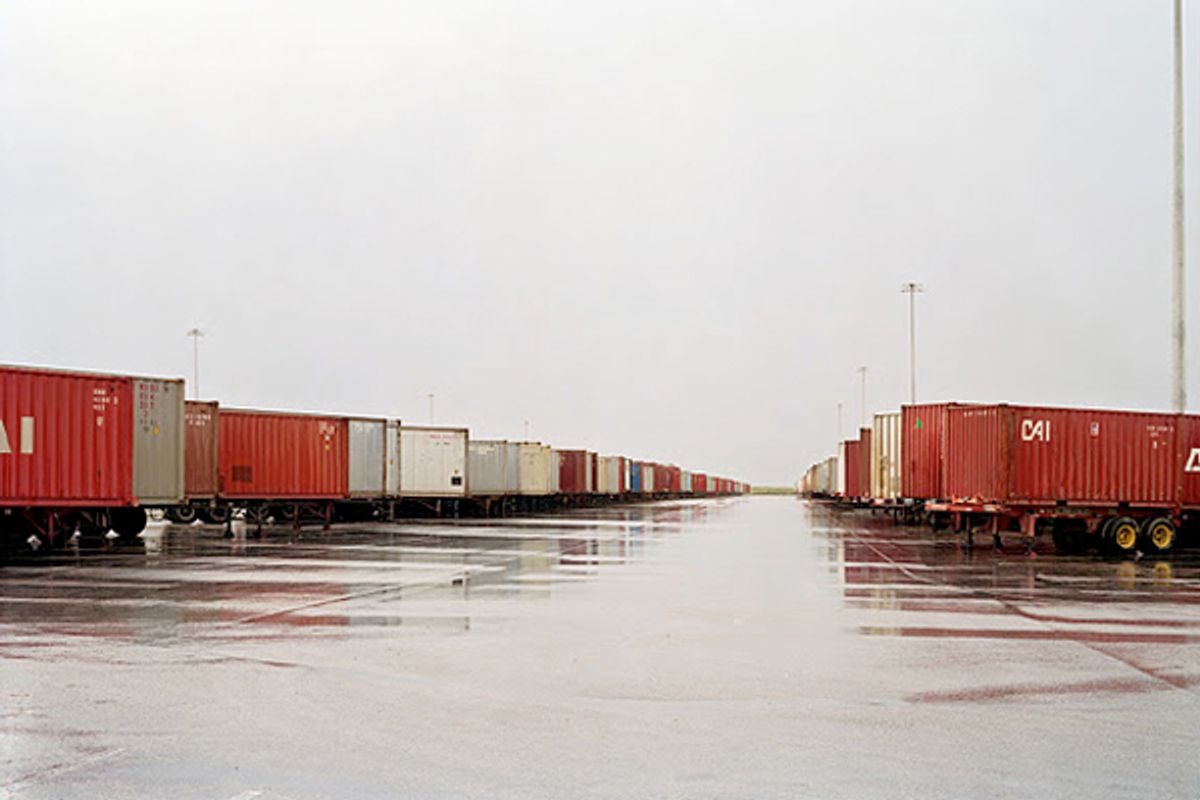 When photographer Victoria Sambunaris made her first trip west after graduate school, she was so stunned at the scale of the surrounding landscape that she didn't take a single photograph. On similar excursions over the course of the past 10 years, she's more than overcome her artistic hesitance -- but she still manages to convey a wide-eyed, appreciative awe in every shot.

It's not surprising that a photographer who is fascinated with the real and metaphorical layers of the environments she depicts -- and delights in showing her audience "every blade of grass" -- would also want to exhibit the tools of her trade: the "ephemera," from guide books to journals, that get her from A to Z. Visitors to the exhibition in Buffalo will be able to see these alongside the photographs they inform.

This week, Sambunaris took a few moments out of her busy installation to talk to me about her photographs. An edited transcript of our conversation is below; see the accompanying slide show for a set of dramatic landscape photographs that really speak for themselves.

You've spent a significant portion of the past decade traveling back and forth across the country. Can you describe these trips -- and the sorts of things you look for, in terms of art?

I started making these trips directly out of graduate school, in 1999. Up until then, I was working up and down the East Coast, and had never gone west. When I first drove across country with my camera, I could not believe how vast and incredible this country is. I didn’t take one photograph on that trip, because I was overwhelmed by it. I was driving with a painter who’d gone to graduate school with me; when we arrived in L.A., I got on a plane and came back. After that, I pretty much made it my mission to be on the road forever.

The first trip I took after that, in 2000, was down to Texas -- the U.S.-Mexico border around Laredo. ... Back then, I was very influenced by the Germans, making these minimalist photographs of boxes on the landscape. I was looking at trucks, trailers, trains -- and thinking about the industry in the country and what it all means, the “American dream.” That was the beginning of my work.

Since then, every year, I’ve zeroed in on an area of the country. I’ll do a little bit of research beforehand -- decide what it is that I’m interested in; where I want to go; what I want to look at ... But the way I work is pretty random. You never know what to expect; you always discover new things. The early trips were a little bit more free, and then with the later trips -- I would say from 2007 on -- I’ve become more specific about what it is that I’m doing.

In 2007, for example, I drove I-80 with John McPhee’s book “Annals of the Former World.” I followed I-80 from New Jersey to San Francisco, looking at geology and thinking about McPhee’s book. I had the book in the car with me; I was questioning everything that I was looking at geologically -- how the country was formed. Why are these coal mines in Pennsylvania? What happened hundreds of thousands of years ago to create this vein of coal?

My most recent project has been back down on the U.S.-Mexico border; I’m revisiting the place, but looking at it differently. I’m looking [specifically] at the division between the United States and Mexico, that landscape that is really one landscape -- and thinking about the fact that we’ve put a fence in, dividing that landscape. Sometimes there’s a geological formation that divides the two countries, and there’s no fence -- like at Big Bend National Park. There’s a river, there are canyons, and that’s the division.

I’ve been working on the U.S.-Mexico border since October 2009, and I’m still intrigued by it. I’m trying to cross into Mexico looking back at the United States. That’s my latest intrigue: what you’re seeing from the other side of the fence, looking back at the landscape.

You mentioned your interest in industry and the “American dream.” Have you noticed major changes during the recession, over the course of the past few years?

I can’t believe it sometimes. I go back to the same towns a lot ... and [sometimes] there are towns that I can’t recognize, because they’ve become boom towns. They’re industry towns. Gillette, Wyo., is one of them. And Wendover, which sits on the border of Nevada and Utah; that’s a town that keeps evolving and changing and growing. I went to El Paso in 2002, and going back to it now, I can’t believe how much it’s grown. I really see changes and expansion in particular towns. Some of the coal towns are really where I notice it -- maybe it used to be a quiet little town with a mine in it; now it’s filled with housing and big-box stores, and lots of people, lots of men, lots of trucks. Because that’s where the industry is. That’s where the jobs are.

But what about the other way around? Previously thriving places that have become dead zones?

You know, I go through those towns; I’m intrigued by those towns. I’m sitting in Buffalo right now, and this is an example of one of those towns that [once] had incredible industry and was really the center of the country ... It’s interesting to see how it’s an ebb and flow. I see a lot of poverty, especially down in the South. I see it all, and I’m intrigued by it all, because I’ll get the stories -- I’ll sit with people, and they’ll tell me about their lives.

The key is: When I go, I drive. And I prepare to go for months. From 2000 to 2005, I was teaching, so I was limited to two- or three-month trips in the summer. But now, I’ve become really comfortable on the road; my last trip to the U.S.-Mexico border was seven months long. And I revisit the same people. The country’s so vast and enormous in some ways, but then these towns are small enough that everybody knows you, and they remember you. Even when I was down at Big Bend, on the border, I got to know some people who lived across the river in Mexico; I came back six months later and they remembered me. Even though there are tons of tourists going through there, they remember you. It’s really wonderful to be so familiar with the place and the people.

When I was teaching, I used to tell the students: Before you graduate, get in the car and go. Go out into the landscape; go see the country. Because it’s incredible -- it’s fascinating.

Many of the photos in our slide show depict lines -- rows of trucks or trains, for instance -- on the horizon. Why are you drawn to these linear images?

I think you have some of the early work, when I was looking at minimalism. I wanted to make a beautiful picture; that’s something that I strive for -- and some of these places are not always beautiful in the way that someone else may see beauty in the world. In my most recent work, you see more geology; the landscape becomes more prominent in the images. It’s just the way the work has evolved, and it’s not anything that I’ve done purposefully. It’s just the way I’m looking at the world and the things that are intriguing me at this moment.

The show here at the Albright-Knox is the first chance I’ve had to do this: In this exhibition, I have a room of ephemera. It’s one room that contains all of what goes into my work, the process. So it’s everything from geology books to guide books, the gifts that people give me on the road, road maps ... There’s a grid of about 1,500 photographs, too; you can see one of the large murals in the regular gallery, and then you’ll see all of the landscape around that photograph in these other pictures, because I use a smaller camera to to study the landscape around me. They’re almost like sketches. And then I go back and make that one picture with my large-format, 5 x 7 field camera.

I don’t shoot a lot when I’m on the road. I’ll shoot at a location -- maybe I’ll shoot a couple of sheets of film, and then I’ll send all the film back to New York. Usually I wait until I get back to see what I’ve done, and sometimes I have to come back and redo things. That’s just the way it works with film.

The last thing I want to ask about is the size of these images. We can’t reproduce them full-size in our slide show; in the exhibition, they’re much larger. What do you think size adds to the viewing experience?

The photographs are 39 x 55 or 55 x 77, and I’m using sheet film, so there’s incredible detail in each one that I take. Every blade of grass, every pebble, every rock, every building -- even if there’s lettering on a truck, I want you to see it clearly. And when they’re enlarged to 39 x 55 or 55 x 77 inches, you can actually walk into the photograph and get lost in it. At least, that’s what I’m hoping -- that you can see the detail that I’m seeing when I’m out there. It’s the closest thing to bringing you out there.

"Victoria Sambunaris: Taxonomy of a Landscape" runs through Jan. 22, 2012, at the Albright-Knox Art Gallery in Buffalo, N.Y.