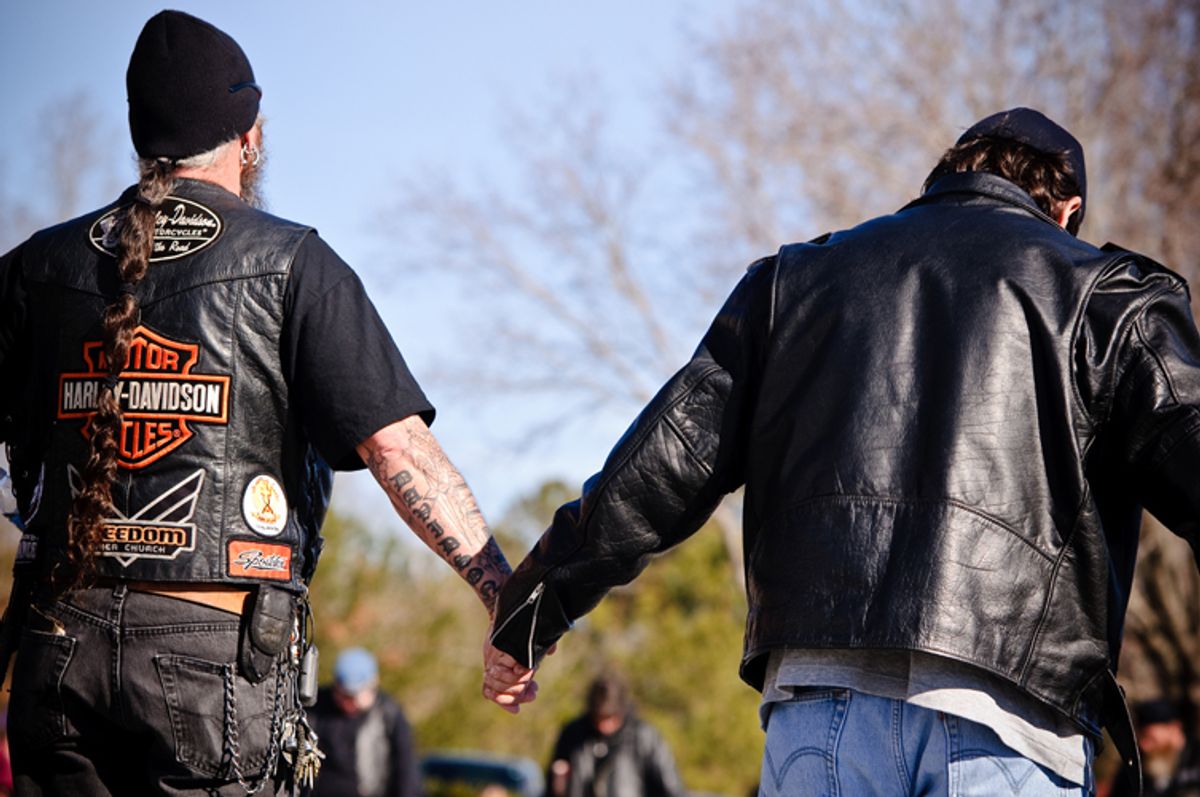 ANGIER, N.C: On a crisp Sunday morning outside this rural Southern town last spring, leather jacketed bikers rode their thundering Harley Davidsons down a quiet country road to a large red barn they call their church.

The lawn was covered with glistening motorcycles and wide-handled choppers. The lot was crowded with bikers exchanging loud greetings and bear hugs as they waited for the Sunday service, which they call a “worship rally” to begin. Their leather jackets – some deeply creased from years spent “serving Satan” – bore patches reading, “Riding for Jesus” and “Jesus Saves Bikers too.” At 10 a.m. the bikers joined hands, bowed heads and formed a large prayer circle that some might have mistaken for something else.

Mike Beasley, the large ponytailed, bandana-wearing preacher of the Angier Freedom Biker Church, spoke out to his flock. He thanked God for the pleasant weather and asked everyone to pray for the four church missionaries who would be departing for India in a few hours. He encouraged everyone to join the motorcade escort to Raleigh International Airport, which would end up more than 40 bikes strong, hijack an entire lane of Interstate 40, and intimidate many passing cars.

Welcome to the Freedom Biker Church, Southern Baptist style. These unlikely congregations -- created by bikers for bikers -- are a growing phenomenon in the South: a response to straitlaced mainstream churches, which Freedom Bikers consider to be "judgmental" and "hypocritical," the two states of mind that these Christians reject.

“It’s about being ‘real’,” says Beasley, 47, who long ago played in a rock band. “We use that word a lot. We called it 'Freedom' because that’s what being a biker is really about. Being free.”

The Freedom Biker Church is the largest and most established of the churches. It has seven locations in the Carolinas, one in Virginia, one in West Virginia, and one in Mississippi. Another was recently founded in Vancouver, and one is underway in Colorado. Beasley founded Freedom with his wife and a few others in 2006. Dozens of smaller biker churches have since sprouted across the country.

Beasley had been a biker in his youth. "I did my share of hell-raising, but I was not a complete helion," he says. He devoted himself to God in his late 20s. He enrolled in a seminary, cut his ponytail and started a conventional preacher’s life. But old urges eventually returned. He would find himself rushing home from work to change into biker gear with his wife, Charlene, and take long night rides across the state. Seeking a middle ground, they tried attending Christian motorcycle groups but found them unsatisfying.

“You ride a little, you share gospel,” Beasley explained, “but then what? We can’t go to the white church with a steeple. We needed a religious community of our own.” The first Freedom Biker Church was an impromptu tent strategically set up between two popular Harley dealerships in Raleigh. It offered free coffee and lessons in scripture. Their first building came a few months later. They immediately outgrew it.

The barn’s interior now resembled a sold-out rock concert. Hundreds of bikers scrambled to find seats while a gruff house band grooved on the stage up front. The bassist played a long flame-decaled red bass. The singer, a tough looking older woman covered head-to-toe in leather, belted out some vintage Bob Dylan gospel:

The live emotion of Christian witness is part of this spiritual atmosphere. The barn was still rowdy when Rusty Rawls, Beasley’s assistant preacher at the time, commenced service.

“Can we start?” he shouted over the commotion. Someone booed.

As he made announcements a black biker’s boot was passed along the aisles. People dropped money into it before handing it off.

During another musical interlude, the band performed Guns N' Roses’ cover of Dylan's “Knocking on Heaven’s Door” followed by a Christian rock tune. Thick-bearded men in the front row sang along with passion as they rocked back and forth on their buckled boots.

When Preacher Mike emerged from the front row holding his Bible, the barn finally took on some semblance of silence. Four missionaries, one of whom who wore a Freedom Biker Church T-shirt with Sanskrit text, joined him in front of the stage.

Beasley said they were going to India to donate two Yamaha motorcycles to a group of Indian preachers working in the remote hills in West Bengal. The four missionaries would teach the Indians how to ride and repair them. "India will never be the same," he said.

“These people have to hike 18 miles through the woods to reach their congregations,” Beasley said. “Trust me. I wouldn’t be preaching if I had to walk that far.”

From that Beasley segued into the service.

“I want to look at Matthew 28 today,” Beasley said. “It’s about missions. Please turn to it if you have your Bible.” Beasley’s preaching style is a mix of rambling bar biker and open-armed loving Christian. He frequently employs biking anecdotes in his sermons. He started recounting how he’d hurt his ankle the other day during a joy ride. He’d stopped at a red light, lost balance of his bike and compressed his ankle under the strain of the weight. “I’m a big man with small ankles,” he joked.

The service ended in a loud cathartic fever that disarmed even the toughest looking bikers in the room. Beasley yelled over the band’s soaring Christian rock for members to come up to the stage and express their love for Christ, to ring the acceptance bell or to unburden any sins. “We’re going to another stanza!” he cried. “Don’t leave without His love.”

Hallelujah-muttering bikers crouched in front of the stage. One giant lumbering man shook with tears. His friends held on to him as if trying to control an excited bull. When he got up he looked drained. A group of bikers shoved through the crowd, escorting a lanky tear-streaming teenager. They lifted him up to the silver bell hanging from the post beside the stage. The boy rang it, announcing his acceptance of Christ, and the barn roared in applause.

“Isn’t it nice hearing that bell?” Beasley boomed. The boy's baptism, which Freedom conducts in water-filled horse troughs, would be scheduled later.

Earlier on the lot outside, when the barn was not yet alight with salvation, Beasley socialized and drank coffee. A small van sold Freedom Biker Church merchandise: T-shirts, beer mugs, wine glasses and pocketknives. He gestured to the knives."It can be challenging to reach unchurched bikers," he said. "Many were discouraged by the church and have lost hope over the years. It's all about connecting."

Alex Vadukul is a contributor to the New York Times and has written frequently for Rollingstone.com. His work has also appeared in Men's Journal, L'Uomo Vogue, and others. He is based out of New York. Follow him on Twitter @AlexVadukul or visit his website at www.alexvadukul.com.