How music changes our brains

Science is becoming increasingly interested in the relationship between sound and the brain. An expert explains 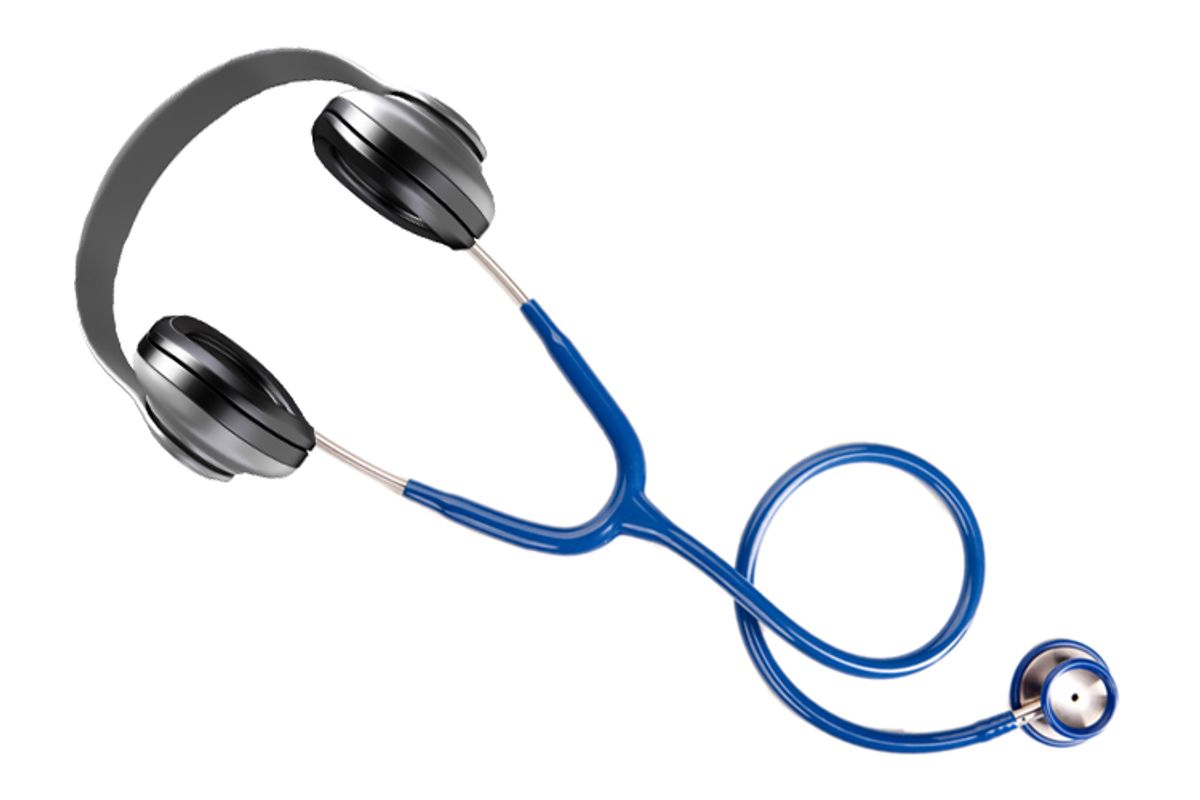 Music has never been more accessible. Just a decade ago, we were lugging around clunky portable CD players that weighed as much as a hardcover book and would skip whenever we made any sudden movement. Now our entire record collection (and thanks to new companies like Spotify, almost any other song on the planet) can fit into our phones. We can listen to music nonstop -- on our commute, at work, at the gym and everywhere else we might want to. But what is this explosion of sound doing to our brains?

In their new book, "Healing at the Speed of Sound," Don Campbell, an author who has written extensively about music and health, and Alex Doman, a specialist in technology in brain function, take an extensive survey about what the latest neuroscientific findings tell us about music and the brain. Although excessive noise has be harmful in a number of ways, music has been shown to improve children with learning disabilities, help elders feel more connected to the world, and even get people into better shape. It provides children with a "hook" for the brain's memory centers, allowing them to retain more information, and it can play huge roles in modifying our moods.

Salon spoke to Campbell over the phone about the dangers of excessive noise, the importance of exercise music and why more children should learn how to play instruments.

As you write about in the book, there's been a growing consensus in the last few years that sound can have some very strong effects on our overall health.

Science is beginning to ask very different questions than it was 20 or 30 years ago. Just 3 months ago, the World Health Organization published a 108-page study that absolutely shook me up. It argued that noise is the second greatest pollutant in the world today. Environmental noise affects cardiovascular disease, cognitive impairment in kids, sleep disturbance, tinnitus, not to mention just plain annoyance. If it's too loud, whether it's classical music, rock, whatever, it's not good for us. And the numbers are just beyond me. The study said noise cost up 45,000 DALY [disability-adjusted-life years, meaning 45,000 years of "healthy" life worldwide are taken away by noise] per year.

I just returned from a week in New York City, and I have a little decibel app on my iPhone. On the subways it registered way over 100 decibels. When I was outside, I found myself covering my ears and needing to use my noise reduction headphones.

But as you point out in the book, the scientific community is increasingly interested in looking at the ways music can affect our brains.

Our home, our work, everywhere around us is overloaded with sound. By selecting certain kinds of music, we can improve our lives and decrease our stress. Music triggers responses: If I speak in rhythm and rhyme, for example, another part of your brain will be [activated than the one that simply responds to speech]. Music can relate to emotions. It creates autonomic automatic responses.

What was surprising to me was, as you point out in the book, fast-paced music actually has real effects on your ability to work out. In one 2009 study you cite in the book, college students biked faster or slower depending on what kind of music they were listening to -- and it made it easier for them to push themselves.

If you put a rhythm behind your exercise, you don't become as tired as quickly because of our natural tendency to fall into a pattern. If you want to do 100 pushups, you will start counting because you need that rhythmicity. The building of the railroads, for example, would never have happened as quickly without the use of repetitive work songs. One professor at the university of Northern Colorado has done extensive research into what they call rhythmicity and rehabilitation, showing that, for people who've had injuries, the use of rhythmic patterns, whether from a metronome or music sustains the ability to prolong exercise in rehabilitative therapy. It's a technique called entrainment. The body creates the rhythm, and then the therapist uses the rhythm in a rehabilitative context.

From a neurological perspective, why is it important to listen to and play music from an early age?

The more participation there is with music early on -- through singing and movement -- the more it simultaneously activates multiple levels of the brain. If you look at the corpus callosum [of someone who plays music] there are more connections made between right and left sides. A child who is moving, dancing and singing learns coordination between their eye, ear and sound early on. And [the experience of participating in music education] helps integrate the social, the emotional and the real context of what we're learning. There are studies that show children who play music have higher SAT scores, that learning to control rhythm and tempo not only help them get along with others but plants seeds for similar advantages when we get much older.

What about learning disabilities?

In many cases, a background rhythm will help and assist somebody with dyslexia or autism to speak and read in rhythm. Exposure to different kinds of patterns -- high range, mid-range, low range, slow tempo, medium, high tempo -- can help bring order to their thinking. In a 2001 study, one researcher found that brain activity changes when there is soothing music, and there is biological evidence that we can actually remove a great deal of the tension in frustrated children by exposing them to more soothing sounds. In the Journal of Complementary Medicine in 2007, there was a study that found that these children can channel more resources when they speak in rhythm and rhyme and when they play and listen to music.

What about the elderly?

Our hearing decreases radically after the age of 60, and often by the time we are in our 80s we don't hear high frequencies and some sounds become more annoying and more confusing. Under different kinds of medication, tinnitus becomes more frequent. It's a symptom, not a disease. By learning to tap a rhythm as one speaks with an elder, to use a drum, a simple hand drum, the size of a tambourine, to be able to translate and transfer the organization of speech and thought becomes much more effective. There's a company called Oval Window that produces floors that vibrate, so elders they can literally hear better through the vibrations.

There are interesting studies on socialization. The more we lose our hearing, the more isolated we become. Music and rhythm help keep people wildly engaged in life. Gordon Shaw [a professor at University of California Irvine] has been a great leader in this field.  My mother had dementia for 10 years, and once I spoke to her in rhythm or played songs on the piano that my dad used to play for her when they were young, it woke her up.

Our lives are also much more deeply enmeshed in music these days. Now that music players are so portable, it feels weird to leave the house without listening to something on my headphones.

If we live in a world where there is no silence or integration, we're not as healthy as we could be. 125 years ago, all music was real and alive. We didn't have radio and iPods, and now it's just the opposite.

Right, and conversely we don't have as much access to silence.

Silence is part of the brain's pattern. It helps it reintegrate, like sleep, but we can't shut our ears like we shut our eyes.

I also find that, now that listening to vast quantities of music is so easy, I get impatient 30 seconds into a song and skip forward to the next one for no real reason.

I love exploring iTunes, but you only get 20 seconds of something to see if you like it. It's like an all-you-can-eat food bar, but you need to understand the nutrition of it. If you're changing music every 30 seconds, then be sure to have 2 minutes of real silence in there. It goes back to chew your food so to speak before you swallow it.

In the book, you describe something called a "listening disability," or "auditory processing disorder," in which children process sound incorrectly. As you point out, 2 to 3 percent of children suffer from it, but it's often misdiagnosed as ADHD or hyperactivity.

Listening disabilities were discovered by ear-nose-and-throat specialists early this century. They manifest themselves when students are not able to discriminate between sounds or they're overwhelmed by sound. They may suddenly realize they misunderstand instructions, they have poor auditory memory, and are easily distracted, have reading difficulties and have language problems. Symptoms in auditory processing can affect our whole learning and communication system. The ear can cause difficulties within the other pairs of cranial nerves, like the vagus nerve that affects not only the diaphragm but also the heart and the larynx. If something is not right in our hearing, we may not be able to speak and talk about it in the correct way. I know of a doctoral student at the University of Edinburgh who is doing fine research looking at the auditory relationship on this point -- we often don't look at the ear as a source of reading and learning difficulties.

Clearly a lot of places are very noisy and there has been some argument that having  a TV or radio on in the background when you're trying to do work is very distracting to people. Does the science back that up?

Different ages need different sounds. The brains of high school and college students are still developing and myelinating in such a way that sometimes sound allows them to focus better. Some of the newer studies have found that if someone is just having music in the background studying, very structured music like Mozart and Vivaldi and Haydn is better than pop music or nonstructured music. But we're all different. For someone who lives in a home where there is a television, a microwave, the heater, as well as traffic outside, their mind can do nothing but work at filtering out sounds. For that person, silence can be quite frightening. And that's where music can be used as a bridge. I've worked in classrooms of third-graders that have very little attention span, but if you give them noise cancellation headphones, they can suddenly hear themselves think.