When the linguist claims that social media is "shallow," he isn't very deep or convincing 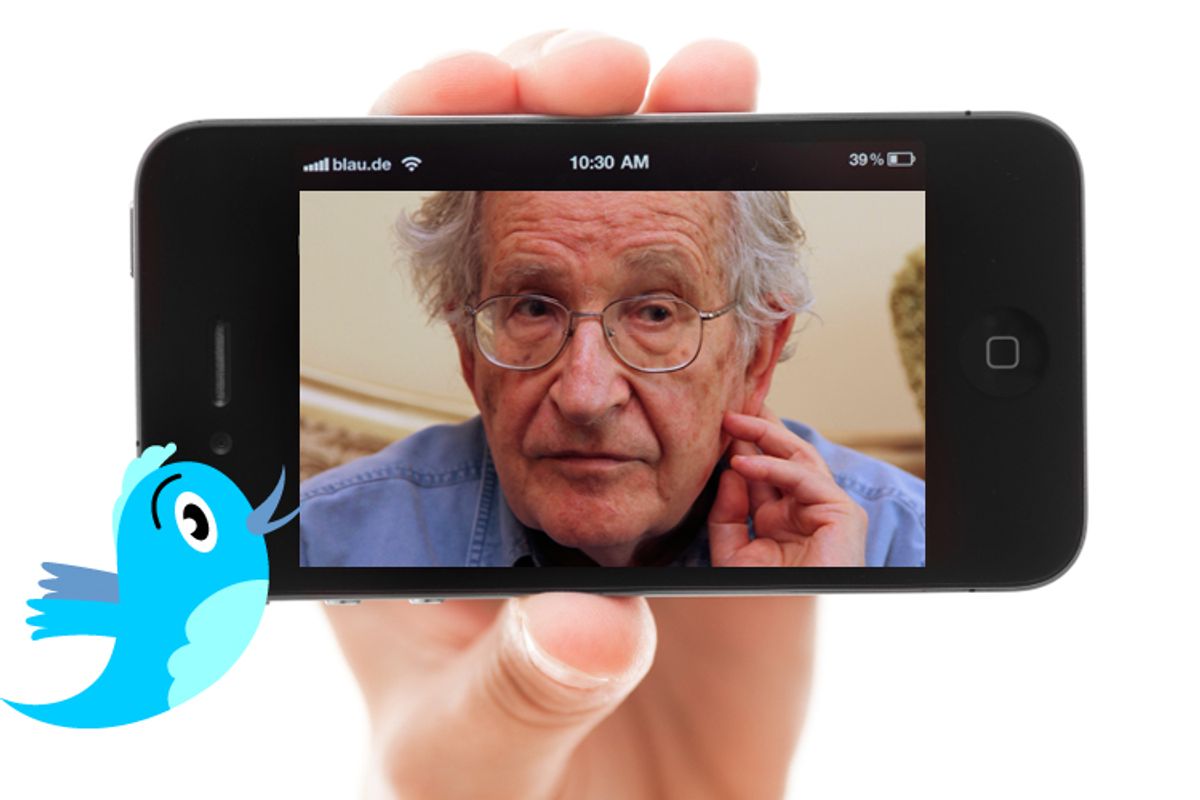 Noam Chomsky has been one of the most important critics of the way big media crowd out “everyday” voices in order to control knowledge and “manufacture consent.” So it is surprising that the MIT linguist dismisses much of our new digital communications produced from the bottom-up as “superficial, shallow, evanescent.” We have heard this critique of texting and tweeting from many others, such as Andrew Keen and Nicholas Carr. And these claims are important because they put Twitter and texting in a hierarchy of thought. Among other things, Chomsky and Co. are making assertions that one way of communicating, thinking and knowing is better than another.

Chomsky, of course, is a left-wing icon. As an accomplished linguist, prominent political activist and perhaps one of the most important public intellectuals of the last half-century, people pay attention to what he has to say, especially since he has been so pointed in critiquing mainstream media. But is Chomsky himself "crowding out" social media at the expense of voices that ought to be heard?

Back in March, Chomsky did an off-the-cuff interview with a D.C. “scene” blog where he spoke about many things, from familiar political and linguistic topics to the more earthy subjects of baseball cards, Bad Religion and WikiLeaks. It was his comments about new communication technologies -- which he admits he doesn’t even use -- that most caught my attention.

“Text messaging, Twitter, that sort of thing […] is extremely rapid, very shallow communication,” he said to interviewer Jeff Jetton. Chomsky said. “[I] think it erodes normal human relations. It makes them more superficial, shallow, evanescent.” Chomsky expanded on this point in another interview last December with Figure/Ground Communication, a site devoted to technology and society.

“Well, let’s take, say, Twitter," he said. "It requires a very brief, concise form of thought and so on that tends toward superficiality and draws people away from real serious communication […] It is not a medium of a serious interchange.”

Maybe I should not read too much into these statements, but “off-the-cuff” remarks often reveal much more than we might assume. They illuminate Chomsky’s larger view of media and, most importantly, highlight the larger trend of established first-world intellectuals dismissing digital communications as less deep or worthwhile than the means of communication that they prefer.

Chomsky has a long (and, I think, mostly terrific) history of criticizing the shallowness of media. His 1997 essay, "What Makes the Mainstream Media Mainstream," is a classic as is his seminal work "Manufacturing Consent." His argument, which is anything but shallow, has been that the few control media content and seduce people into believing what they would not otherwise.

Today, of course, the top-down media Chomsky attacked is often said to be in “crisis” because of a new, more social and participatory media environment. Some tech-utopians say this trend has provided a voice to the masses and fueled social revolutions across the globe. Other tech-dystopians view social media as just another venture-capital funded way of exploiting people under the guise of empowerment. But in the world of Chomsky this important debate is instead undercut by the view that communication on digital media is inherently “shallow.”

To be fair, this is not Chomsky's area of expertise and his is just one voice in a chorus of complaints about digital depthlessness -- be it Keen’s "Cult of the Amateur," Carr’s "The Shallows" or even in mainstream news commentary such as this New York Times panel discussion on digital books where panelist after panelist, including Carr, claim that the digital is shallow. And then there are all those we encounter in our everyday lives who dismiss tweeting and texting as trivial.

Claiming that certain styles of communicating and knowing are not serious and not worthy of extended attention is nothing new. It’s akin to those claims that graffiti isn’t art and rap isn’t music. The study of knowledge (aka epistemology) is filled with revealing works by people like Michel Foucault, Jean-François Lyotard or Patricia Hill Collins who show how ways of knowing get disqualified or subjugated as less true, deep or important.

And this is where it gets more interesting than Chomsky seems to realize.

Digital communications are produced more by some groups than others. Texting, tweeting and the like are not just the domain of wealthy kids and knowledge workers, as some assume. Research from the Pew Internet & American Life Project has demonstrated that nonwhites are much more likely to connect to the Web, communicate and create content on mobile phones than are whites. Globally, the same trend may be playing out. Research here and elsewhere indicates these so-called shallow ways of communicating are precisely the ways those in the Third World are connecting to and interacting on the Internet.

“In many cases, historically disadvantaged groups have used social media technology to find opportunities previously foreclosed to them. For these folks, social media is hardly trivial," observes my fellow cyborg, P.J. Rey.

And this is to say nothing of the instrumental role social media has played in the Arab Spring  or the current #occupy protests spreading globally. As I’ve written elsewhere, new ways of communicating facilitated in part by smart phones and social media have given voice and audience to protestors. To some degree (and we can debate how large this is) social media has enabled a mass manufacturing of dissent.

Chomksy, of all people, ought to take note. When he defends his form of communicating (printed books and periodical essays) with claims that tweeting/texting lacks depth, he is implicitly suggesting that nonwhites and those in the Third World are inherently communicating less deeply than their white and first-world counterparts. He doesn't seem to know enough about the reality of social media to examine his own assumptions.

In fact, in the debate about whether rapid and social media really are inherently less deep than other media, there are compelling arguments for and against. Yes, any individual tweet might be superficial, but a stream of tweets from a political confrontation like Tahrir Square, a war zone like Gaza or a list of carefully-selected thinkers makes for a collection of expression that is anything but shallow. Social media is like radio: It all depends on how you tune it.

But even if we grant Chomsky, Carr and the others that social media is less deep and more instantaneous, the important questions then become: Is instant, digital communication less true? Less worthy? Less valuable? Less linguistically creative? Less politically efficacious?

Chomsky, a politically progressive linguist, should know better than to dismiss new forms of language-production that he does not understand as “shallow.” This argument, whether voiced by him or others, risks reducing those who primarily communicate in this way as an “other,” one who is less fully human and capable. This was Foucault’s point: Any claim to knowledge is always a claim to power. We might ask Chomsky today, when digital communications are disqualified as less deep, who benefits?

Nathan Jurgenson is a PhD student in Sociology at the University of Maryland who blogs at Cyborgology. Follow him on Twitter @nathanjurgenson