When fans call last night's episode the best ever, what they really mean is the most needlessly violent 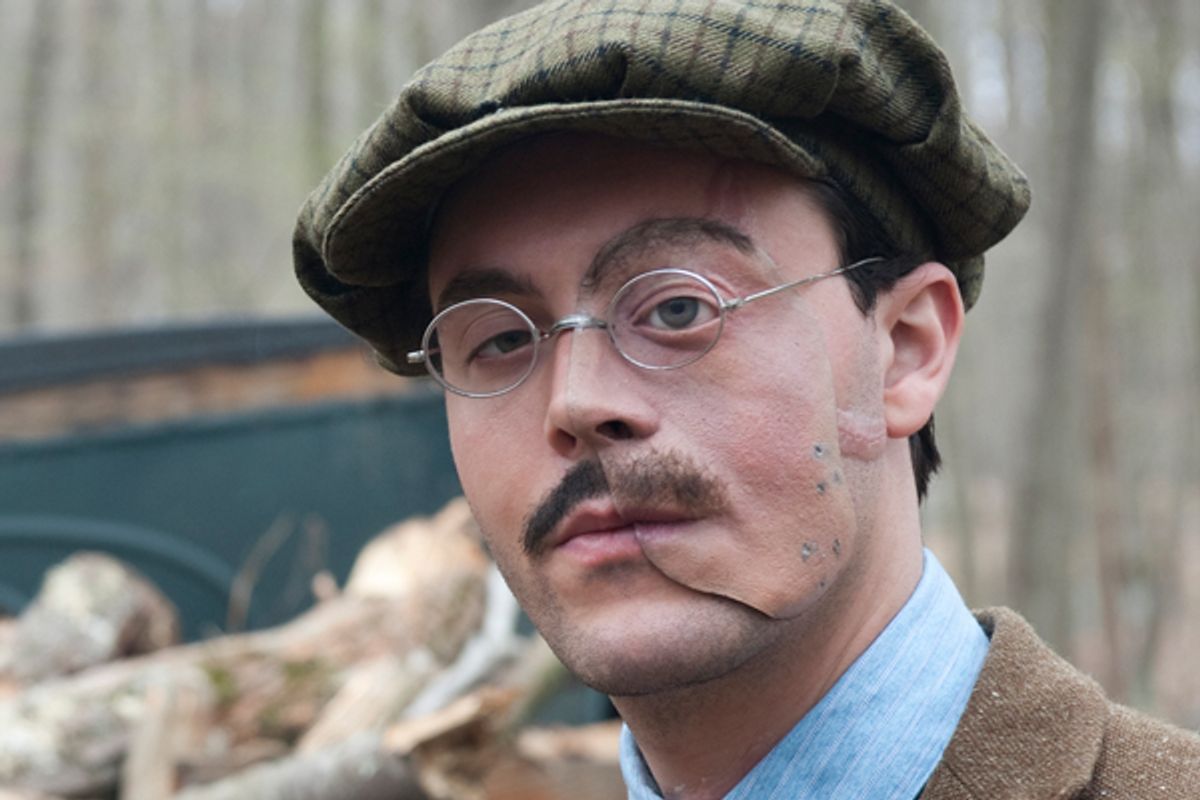 According to a lot of fellow "Boardwalk Empire" fans who have lavishly praised it, last night's installment (written by Howard Korder and directed by Tim Van Patten) was a cut above the norm, maybe even the greatest episode ever.  That's news to me. What I saw was typical "Boardwalk," albeit a bit more tightly structured than usual -- a showcase for stunningly detailed sets and costumes, with strong performances by male actors with plenty to do, weak performances by actresses who were given almost nothing to do, and two spectacular acts of violence that played like textbook examples of a show trying to jack up its excitement level with "Oh my God, I can't believe they did that!" mayhem.

The acts of violence were (1) a drunk Eli Thompson impulsively whacking ward boss George O'Neill across the windpipe with a wrench, then finishing the job by bashing his skull until it split open on the floor of Eli's workshed like a casaba melon, and (2) the cranky old politico and Indian Wars veteran Mr. Parkhurst, who had previously bashed Jimmy Carmody across the face during a meeting, getting scalped near the end of the episode by Jimmy and the disfigured sharpshooter Richard Harrow. (I knew that would happen to somebody the minute that Parkhurst bragged about serving in the U.S. cavalry during the Indian wars. On a series with no Native American characters, why else bring it up?)

Both these assaults were shocking, not because they came out of nowhere, but because they cheerfully confirmed the show's allegiance to the worst impulses of Martin Scorsese and "The Sopranos" -- the tendency to spotlight pissing-contest behavior between macho guys in the most gruesome terms imaginable. I'm thinking specifically of the moment in "Casino" where Joe Pesci's character, Nicky, stabs a guy in the neck with a pen until he dies in the middle of a crowded bar -- a cartoonish re-hash of the brilliant, complex, dramatically pivotal Billy Batts death in "GoodFellas" -- and that episode in season three of "The Sopranos" when a petty thug that we'd never met before put a man in a coma by smashing him in the head with a golf club. That set up a special guest appearance by aging, terminally ill hitman Bobby Bacala Sr., (Burt Young), who ended up drenched in blood after killing the clubber, before dying himself in a car accident. Sure, you can defend these moments as expressing the themes of their respective stories, but you really, really, really have to stretch to do it. Mostly they're like a lot of the violence on "Boardwalk:" wild and nasty for the sake of being wild and nasty. They're the handsomely produced, scripted cable equivalent of bum fights on YouTube.

There was also a clumsy brawl between Atlantic City treasurer and chief power broker Nucky Thompson and Eli, who has joined forces with Jimmy and his conniving showgirl mother, Gillian. This confrontation was also, I would argue, mostly unnecessary. By the time Eli burst into tears in the conservatory, he was already a beaten man, pathetic and lost; because so much emotional violence had already been done; the fight was a lot of wasted motion. At least it was exciting and believably raw, and in terms of characterization, it didn't come out of nowhere. The tension between the politically gifted Nucky and the politically inept Eli had been established very early in season one and teased out a bit more pointedly ever since. And the run-up to the fight confirmed one of Nucky's very worst impulses, his tendency to respond to revelations of weakness in others by forcing the weak person to abase himself further. Sensing that he was in way over his head, and trying desperately to get back into Nucky's good graces, Eli told his brother that he knew who was going to testify against him. It was information that no longer meant anything to Nucky, who was already working out a complicated scheme to avoid any legal punishments for his electoral corruption. Yet Nucky's angry face relaxed at the sight of Eli's tears, and for a moment you thought he was going to reach out to his brother. Instead he ordered him to kneel down and lick Nucky's shoes.

The Nucky-Eli tussle ended like a fight in a saloon in an old Western, with Nucky's special lady friend Margaret holding a shotgun on Eli to break things up. It was nice to see Margaret being given something to do; in most episodes she's a lovely doormat -- a kept woman who's mainly there to grin and bear her husband's cavorting, and penny-pinch her household staff; it's a far cry from the radiant moral compass established (all too briefly) in early episodes of season one. But "Boardwalk" couldn't resist diminishing Margaret at the end of the scene by having Nucky reveal that there were no bullets in her shotgun. (John Wayne and other Western stars did this sort of thing often in old movies; it was a way of establishing that the woman who saved the hero from death him didn't "really" save him.)

Gillian was likewise relegated to secondary status in this episode; she was presented mainly as a slinky adjunct to her son as he did his Irish-American Michael Corleone routine, consolidating power that he never imagined he'd acquire. It was a major comedown from last week's episode, which gave Gillian her most psychologically rich scenes yet, and provided "Boardwalk" with one of its most powerful closing images: Gillian, who had been impregnated with Jimmy at age 12 by Jimmy's grizzled horndog of a father, the Commodore, confronting the now stroke-damaged and bedridden old man with a long, searing monologue about the first time he raped her, then slapping the hell out of him.

Ironically, "Boardwalk" did run an episode this season that deserves to be called its best ever. It was the episode that ended with the aforementioned slapping -- last week's installment, "What Does the Bee Do?" Written by Steve Kornacki (no relation to the same-named Salon columnist) and helmed by Ed Bianchi -- who's my pick for the greatest American narrative filmmaker that almost nobody has heard of -- it was perfect in almost every way, a model of the very best TV drama storytelling; immediately after viewing it, I added it to my running list of the best single episodes of the year.

"What Does the Bee Do?" was less interested in gangster pissing matches than in detailing the power relationships between characters in all walks of life. Its fixation on social rituals and racial, ethnic and class strata reminded me of "Deadwood" and "The Wire." The central theme was expressed in that deceptively tossed-off-seeming moment where Arnold Rothstein pressed Lucky Luciano into a bit of business he thinks is beneath him. Rothstein said he'd just come from a dinner at which he was served tripe, and that he ate it even though he dislikes tripe because sometimes in life you just have to eat things you don't want to eat. Without putting too fine a point on it -- which is often a risk in "serious" cable dramas -- the episode showed us scene after scene in which characters figuratively ate something they didn't want to eat, or finally got tired of having to eat it over and and instead spit it out.

That's what was happening in that terrific final scene with Gillian; she would never have dared confront the Commodore over his lifelong exploitation of her while he was healthy, but now that he was paralyzed by a stroke, she was free to act out two decades' worth of suppressed fury. The African-American gangster Chalky White never seemed more paralyzed than he did in this episode. He was dressed down at a public meeting by the vengeance-seeking female relatives of men who died violently while working for Chalky, ordered to stand down by the more powerful (and lily-white) Nucky, and made to feel like a country bumpkin in the very home that he'd worked so hard to buy and fill with tasteful furnishings. The image of the dark-skinned Chalky fuming at that dinner table spotlit some of the same intra-racial tensions that Spike Lee addressed in "School Daze" and "Jungle Fever." The slow pan from Chalky's light-skinned son playing piano in the house to Chalky out in the shed whittling a stick boiled an immensely complex sense of alienation down to a single brilliant shot.

I also much prefer last week's Richard Harrow scenes -- especially the ones in which he sat for a portrait drawn by Jimmy's wife Angela, and talked about his thorny but deep relationship with his sister -- to the ones this week, which were elegantly photographed by way too on-the-nose. (Chasing the stray dog who stole his mask, he exclaims, "I need that mask! I need that mask!")

I raved about last week's episode to a friend right after it aired, and he replied, "It was all right, but nothing happened." I'm starting to think that when fans of a dark cable series complain that "Nothing happened" in an episode, what they really mean is, "There was no violence, and the women talked too much."