"Put a Bird on It": The aftermath 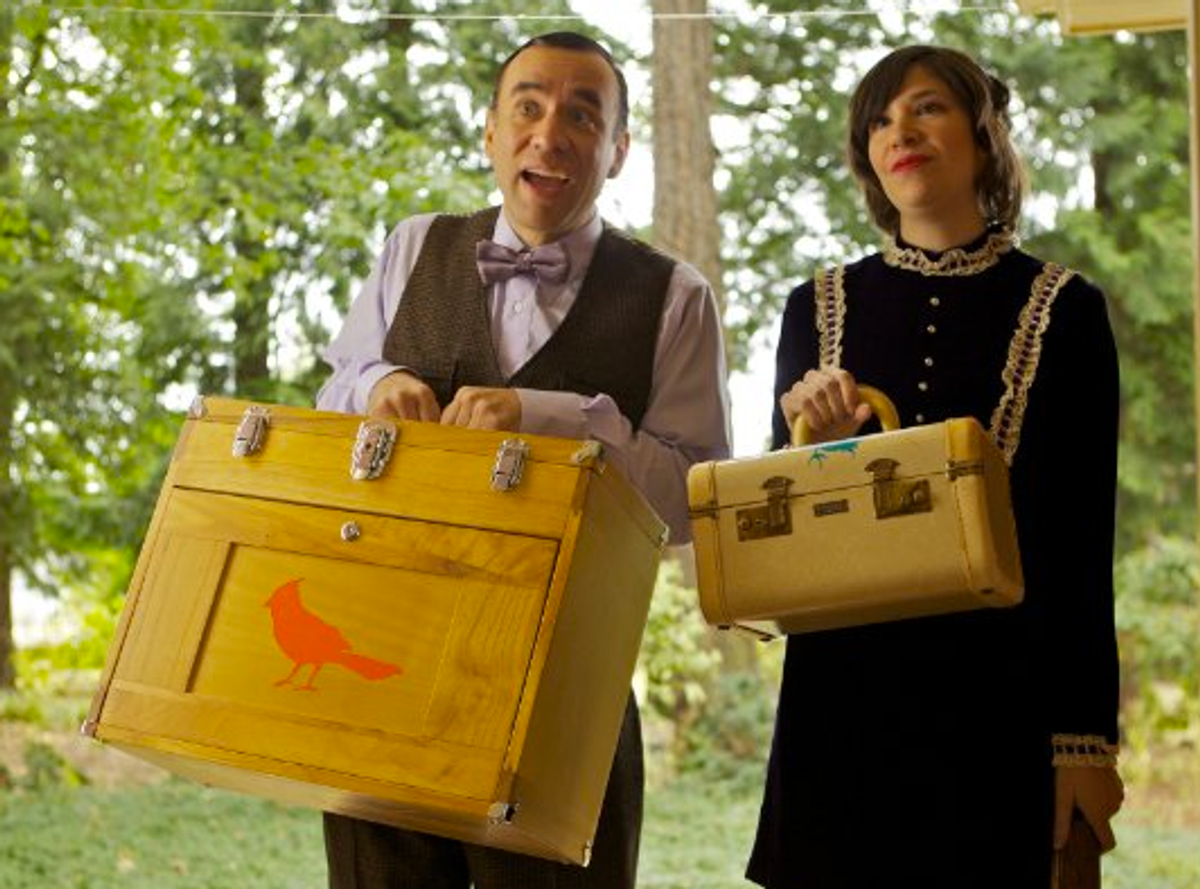 The other day I popped into an artsy boutique to pick up a birthday treat for a friend. Flipping through handmade wooden magnets designed by a hip collage artist, I found my finger resting on one featuring a pen and ink drawing of a bird. Nervous, I glanced left and right before dropping the item back into its display.

The image was lovely, but was it cliché? In a post-"Portlandia" world, I couldn’t show up to a party of design-savvy women with a gift upon which someone had put a bird. What would that say about my taste? That it was stuck in last January? The pang in my gut was so specific and acute that I felt only Germans could accurately name it. Did I just experience der Vogelschäme?

“Put a bird on it, right?” I remarked to the shop clerk with a knowing chuckle. She acted like she didn’t hear me. She likely stopped listening to those jokes months ago, after “Portlandia,” the IFC sketch comedy show starring Fred Armisen and Carrie Brownstein, reduced the twee design meme, its creators and consumers to a snarky catchphrase she probably hears more often in this shop than she would care to admit.

In the sketch, two improbably named artists, Bryce Shivers and Lisa Eversman, visit a stylish Portland boutique to slap generic bird silhouettes on teapots and vintage suitcases and call it art. Their refrain, “Put a bird on it!” pointed out just how painfully ubiquitous the bird motif had become. And while the sketch aired nine months ago, it's still causing angst throughout Etsy, the indie-craft world and among artists, designers and shoppers who are used to setting trends -- not being outwardly mocked themselves.

Brownstein first brought the idea for the sketch to Armisen when they were developing the “Portlandia” pilot. “I had started noticing that putting a bird atop an otherwise pedestrian or utilitarian object elevated it to art — or that putting a bird on a painting made it an instant signifier for coolness,” said Brownstein in an email interview. “The bird was basically becoming shorthand for art.”

“Portlandia's" audience already consider themselves in on the joke. Their sketch about an adult hide-and-seek league is funny on its own merits, but it hits harder if you’ve actually had to pretend to give a shit about a kickball grudge match between 30-year-old graphic designers. The first time I saw “Put a Bird on It,” I made a mental inventory of my own birded totes and T-shirts and saw them as trite for the first time. Ashamed, I recognized myself. Then I immediately forwarded a link for the video to friends — the first rule of getting the joke is to make sure everyone knows you get it.

Comedians mock mainstream culture all the time, but we don’t expect their targets to dignify it with a response. When Patton Oswalt dubbed the KFC Famous Bowl (a layered monstrosity of mashed potatoes and various side dishes) “a failure pile in a sadness bowl,” stoners the world over didn’t stop ordering them in the drive-thru at midnight. Did middle-aged soccer moms pull off their sexless, butt-flattening pants after "Saturday Night Live" aired a fake commercial for “Mom Jeans”? A visit to my local library branch says no — people who got the “mom jeans” joke already wouldn’t be caught dead in elastic waists.

But “Portlandia” doesn’t poke fun at Middle America. It mocks, however gently and fondly, the indie outliers who probably consider themselves beyond such reproach. (A second seasons begins on IFC in January.) And thanks to the Internet and ease of video clip forwarding, “Put a Bird on It” might be the first comedy sketch to have had a noticeable impact on the buying habits of the people who were both the audience for and the butt of the gag. If I bought that bird magnet, it would be like admitting that I wasn’t in on the joke, that I didn’t get the reference. Laugh with or be laughed at.

It’s a consequence of the material that Brownstein and the “Portlandia” crew didn’t have in mind when they created the characters and their catchphrase.

“We're not an ad agency, we're a sketch show,” she said. “That being said, we are very flattered that people watch this show, and that the idea caught on. It's definitely been a little surreal to realize that 'Put a Bird on It’ has become part of a larger conversation about the intersection between commercialism and art, about craft and saleability.”

While Brownstein hasn’t noticed an overall decline in the array of available bird-themed merchandise since the show aired, she admits that her own bird buys have diminished as the amount of bird-related items she now receives as gag gifts increased exponentially.

“I have had designer and illustrator friends tell me that they're more self-conscious about putting birds on things now,” she said. “We certainly didn't mean to thwart anyone's creativity, but if this ushers in an era of otters and deer I think we'll all breathe a sigh of relief, and then decorate our homes accordingly.”

And yet if you search for “bird” in Etsy, you’ll still find nearly a quarter of a million handmade items. Among them is Pennsylvania-based artist Whitney J. Marsden’s delicate pendants featuring antique lithograph images of birds. Despite her chosen imagery, Marsden thinks “Put a Bird on It” is funny because it’s true.

“When so many visual icons get regurgitated throughout design industries — fashion, interior design, product design, graphic design, advertising, and, thanks in great part to DIY craft — satirical media such as 'Portlandia’s' ‘Put a Bird on It’ serves as a welcome jolt to the creativity and an opportunity not to take trends too seriously,” she said.

Though Marsden says she thinks it’s wise to be aware of how trends play out, she continues to revisit nature — including birds — for inspiration, because of her love for the natural world and its endless bounty of material to interpret.

“Designing with a natural theme is nothing new, but the final product will be most effective if I infuse my unique brand into the theme and take it beyond, ‘Oh, hey, it’s a bird,’ to beautifully rendered, relatable imagery and a high-quality, original product,” Marsden said. “Ultimately, I design and make what flows naturally from me. I put it out there, the public dictates whether it’s the right time for a particular product.”

“From what my customers and peers are saying, folks still love the birds,” she added.

Grace Bonney, editor of the influential Design*Sponge blog, has noticed that designers are still putting birds on things, though now some of those birds are in direct response to the show -- they're not just cute, they're a postmodern, meta-response.

“I sort of thought everyone would feel really embarrassed, like ‘Oh, we really have to stop this as a trend,’” said Bonney. “There was a group who felt embarrassed, and then there was a group who felt [continuing to put a bird on it] was an opportunity to cash in on an easy trend. But my favorite part is there's a fragment of the craft community that's now taken it upon themselves to kind of mock what [the show] was already mocking, so now they're making products that are mocking 'put a bird on it,' where they're essentially still just putting a bird on something.”

Parodying the parody extends beyond indie designer in-jokes. Humor blogger and “Portlandia” fan Jenny “The Bloggess” Lawson created a tote bag sporting a silhouette of the extinct Dodo bird and “Put a bird on it!” in a cheerful font and posted it for sale in her Zazzle store. When Zazzle informed her that a complaint had been issued regarding the show’s intellectual property, she wrote, “I thought it was funny that a show based entirely on satirizing an entire city would have a problem with my bag satirizing their show.”

“No one ever buys my bags, anyway,” Lawson said. “That was the funniest thing about the whole situation. Legal departments, bloggers, production companies and television stars all getting involved in a strange debacle that netted about $11 in sales.  If they made it into a skit no one would believe it.”

She removed the first Dodo bag but created a new one, which stated flatly, “Do not put a bird on it (unless you first get legal permission from the company representing 'Portlandia').” That bag was also removed. Beyond amused, Lawson continued to post new parodies, including one with cattle called “Put a herd on it.” Finally, Armisen himself stepped in to negotiate a truce.

“I never expected that I'd hear anything about it, which is really what made it so funny when I did,” said Lawson. “I also never expected to actually hear from Fred and Carrie, which made it even more surreal. Fred continued to email me with updates while they tried to figure out the issue, and then he emailed me again to tell me that they'd explained to their production company that 'Portlandia' is a whole different animal and that small businesses and snarky parodies were the sort of things they supported.”

In my neighborhood coffee shop, the birds have won this round. Ceramic owls perch in every corner, watching me order an Americano with their wise, dead eyes. On the chalkboard, a defensive answer to what must be a frequently asked question — a customer bestowed upon the owners their first owl and declared it the store’s mascot. Someone put a bird on an entire shop, and, resigned, it has been displaying them since.

Still without a gift for my friend, I consider ordering a set of Marsden’s temporary tattoos, which include bird designs. If we put a bird on ourselves, is that enough of a recognition of the meme to indicate sophisticated subversion? Or are birds simply off-limits forever? Among the quarter-million bird items on Etsy are several shops selling pendants made from bird skulls, shifting the emphasis from generic, harmless silhouette to the very specific and delicate underpinnings of life and mortality, a trend that Bonney endorses.

“I'd love to see people move it toward taxidermy in general, to appreciate the whole animal rather than a clip-art version of it,” she said. “I think the reason why birds have achieved this universal appeal is what's not to love about a bird? It's a beautiful thing. It represents freedom and flying to almost everybody who looks at it. So why wouldn't you want to push that in a new direction?”