How low will Rick Perry go?

Sinking to new depths, he brings on Bush "brawn" Joe Allbaugh, who backed Giuliani in '08. Is Perry the next Rudy? 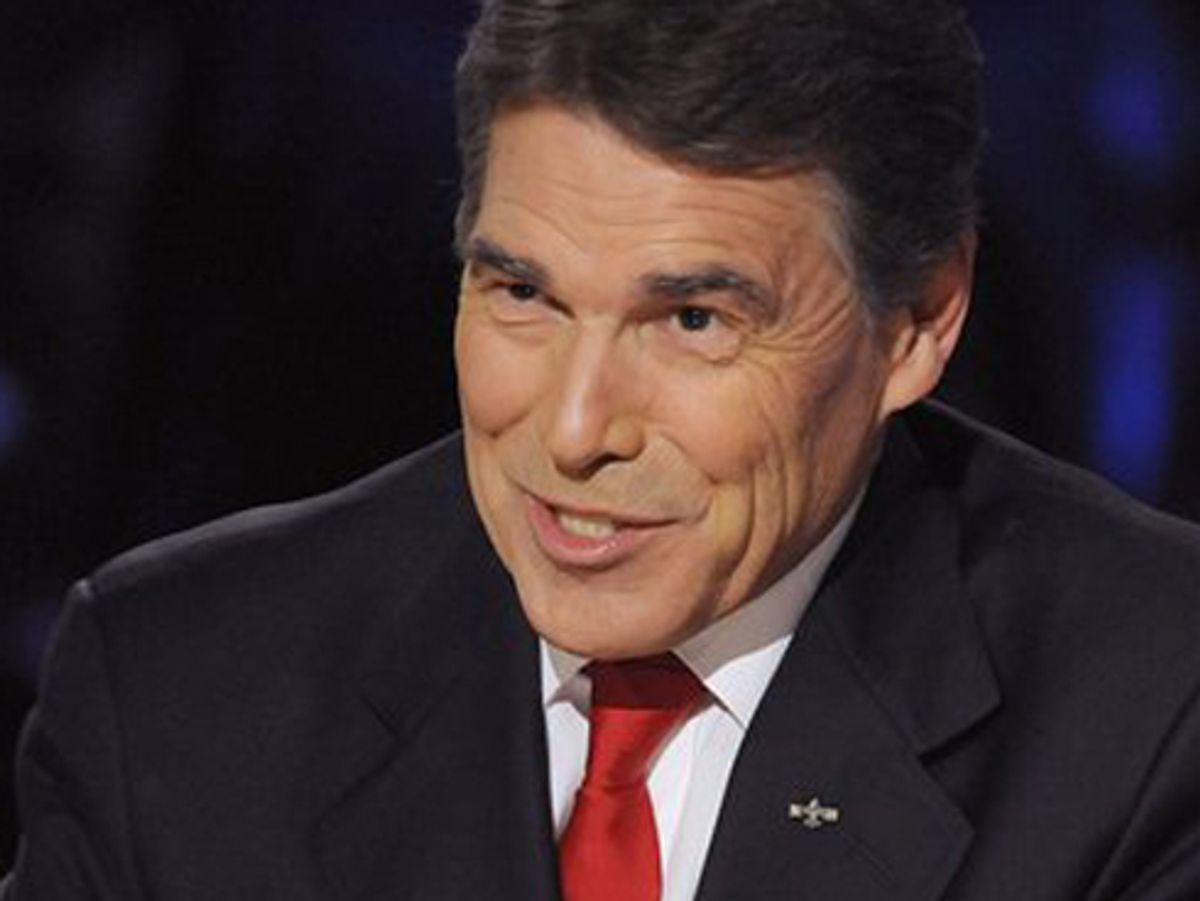 Rick Perry's craven embrace of birtherism in Parade Magazine shouldn't surprise anyone. Much like Mitt Romney, he'll say whatever he thinks he needs to in order to win election. But he's not as smart as Romney, and he's got no chance in a general election unless he climbs from his new depths in the Republican primary pack. So the man who's been known to flatter secessionists made a play for the birther vote this weekend, along with the support of the movement's leader, Donald Trump.

Steve Kornacki wrote about Perry's ludicrous descent into birtherism here; I don't want it to be distractive, or a distractication, as Jonathan Capehart put it.  I'm just starting to wonder how low Perry can go, and not only in terms of political bottom-feeding. How low is he willing to go in terms of poll numbers? Is there any point at which declining poll numbers, debate disasters and not ready for prime-time moments like the Parade interview will convince Perry he's hurting himself on the national stage, and it's time to head back to the ranch?

It's probably the wrong time to be asking this question: Only today Perry's team made headlines by announcing that George W. Bush 2000 campaign manager Joe Allbaugh, known as Bush's "brawn" to Karl Rove's "brain," will join Perry's team as a high-level advisor. One anonymous source told the Texas Tribune Allbaugh would be running the campaign, and the Dallas Morning News' Wayne Slater just said the same thing on "Hardball."

That's supposed to be big news, since Team Bush mostly hates Perry (Rove has called him "toxic" and mocked his many mistakes). But I'm not sure Allbaugh is the answer. In 2008, he also "advised" the rising GOP leader who was expected to beat that year's wobbly presumed front-runner, Sen. John McCain. Allbaugh's guy, former New York Mayor Rudy Giuliani, jumped ahead in early polls just as Perry did. Then he crashed and burned without finishing higher than third in a single primary. (Allbaugh was also Bush's first FEMA director, and after leaving the agency in the capable hands of Michael Brown, he helped
American corporations make big money profiteering in Iraq, and later, in New Orleans after Hurricane Katrina.)

Could Perry be the Giuliani of 2012? Right now the guy who vaulted into the lead after entering the race in August has lost roughly 20 points in national polls in just a month. The man who's able to boast he's never lost an election is in fifth place in Iowa, behind Herman Cain (yes, that's right), Ron Paul, Romney and Newt Gingrich, in that order – with only 6 percent of voters supporting him, according to the latest University of Iowa poll. Perry says he's going up with TV ads in the first caucus state shortly, and he's got more money in the bank than Romney does. But it's hard to see how he makes up that kind of ground in just two months.

In Perry's "must-win" state, South Carolina, the capital of secession, he likewise trails Cain and Romney, standing in third place according to the latest NBC-Marist poll, with 9 percent of the likely Republican voters compared with Cain's 30 percent and Romney's 26 percent. And just like Rudy Giuliani counted on a big win in Florida, where he finished third, Perry's team is likewise counting on Florida as a firewall, hiring veterans of Gov. Rick Scott's team as well as Allbaugh today. But he's running a distant third in Florida, too, according to Real Clear Politics.

Ross Douthat is right. I've never put those four words together in my life, so it's a big day. But at this point it's hard to see a road to the nomination for Perry. "After watching him stagger through the debates, his tongue tied and his poll numbers cratering, it’s clear that a Republican Party that nominated the Texas governor for president would be deliberately cutting its own throat," Douthat wrote Sunday. "And this is something that national political parties almost never do."

So what's Perry's endgame? He's got enough money to stay in the race, and his new hires deflected attention from his dumb Parade interview on Monday. But is there a point where Perry's national failure hurts him in Texas? Is he really in this race through Florida? Is there any road to victory? He showed his mean streak against Romney in last week's debate, and it backfired badly. Now he's expected to go after the strangely surging Cain, the man he twice called "brother" at that crazy Las Vegas show. Although Karl Rove hates Perry, he went after Cain on Fox News today, holding a white board with a list of Cain's campaign stumbles and insisting, "I think it has created an image of him as not being up to this task. That’s really deadly."

Will that help Perry? It's far more likely to help Romney. Cain attacked Rove as trying to help the nominal GOP front-runner, which Rove denied. Whatever Rove says, I think Perry's role in the race is mainly to be distractive, so to speak, from the truth that Romney is heading for the nomination.

I'll be discussing the Perry campaign's latest moves on MSNBC's "The Ed Show" at its new time, 8 p.m. Eastern/5 Pacific.